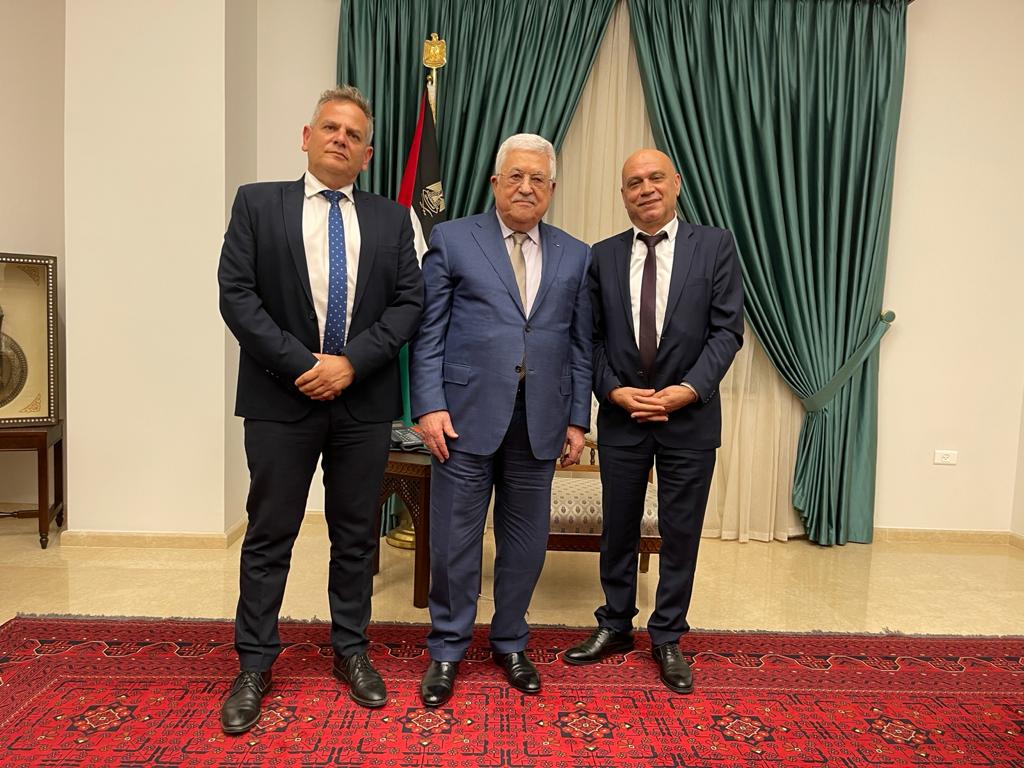 Health Minister Nitzan Horowitz (Meretz) became the second top official to meet with Palestinian Chairman Abbas since the new Israeli government took office in June, in a move his party said was coordinated with and authorized by Prime Minister Naftali Bennett. He was joined by other Meretz members, including Regional Cooperation Minister Esawi Frej. Defense Minister Benny Gantz also met with Abbas at his Ramallah headquarters in August.

According to the Palestinian Authority’s Wafa news agency, Abbas “stressed the importance of ending the Israeli occupation and achieving a just and comprehensive peace” in their meeting.

The PA leader reportedly asked the Meretz officials in attendance for a meeting with Interior Minister Ayelet Shaked, who tweeted in response to the report: “I will not meet with a Holocaust denier who is prosecuting IDF soldiers at the International Criminal Court at The Hague and pays Jew killers.”

Even members of the coalition criticized the visit. Housing and Construction Minister Ze’ev Elkin (New Hope) called the meeting “a waste of time and an unnecessary event that causes damage.” He said, “Abu Mazen [Abbas] is at the end of his road and unable to conduct a diplomatic process.”

Deputy Minister in the Prime Minister’s Office Abir Kara of Bennett’s Yamina party wrote: “The green pass [for permitting entrance to certain venues to Israelis who are vaccinated against or have recovered from the coronavirus] has crashed, millions of Israelis are unable to issue, and hundreds of thousands of business are up in the air – but the health minister feels no urgency to deal with it. It’s more pressing to go have dinner with the head of the terror authority in Ramallah.”

Likud party chairman Yariv Levin blasted the meeting. “Israel’s left-wing government minister continues to crawl on his hands and knees to Abu Mazen [Mahmoud Abbas], and all with Prime Minister Bennett’s blessing. Meeting with terrorism funder Abu Mazen is more important to the health minister than the health of Israel’s citizens,” he said.

Horowitz, for his part, posted a picture of himself and Abbas on social media. “We have a shared mission: to preserve the hope for peace, on the basis of a two-state solution,” he tweeted.

“Meretz has a mission within the government: to keep the two-state solution alive, not to let it disappear, and not to sabotage the chance of getting there in the future because there is no other solution,” he asserted.

Horowitz continued: “We believe there is no room for unilateral steps that harm the chance of implementing the two-state solution: not for new settlements, not for illegal outposts, and not for violence by radical settler elements,” he said.

Meretz MK Michal Rozin said: “It’s important we express the fact that we still believe in the two-state solution. I expect to hear from Abu Mazen his commitment to the war on terror and security cooperation with Israel – to promote a struggle that is nonviolent.”

Frej said: “We are here to advance the two-state solution, to say ‘you are our partner.’ The future is important, but we must first act to make a better present, and for that, you need cooperation between the ministries and governments.”

In a statement following the meeting, Abbas’s office said: “We must begin to create confidence-building steps, to prove we intend to make peace, and to allow to maintain the hope of the Palestinian people. I invite all new government ministers in Israel to come here. We don’t have to agree, [but] we do need to talk.”

According to the Wafa report, mere hours ahead of the meeting, Abbas called the parents of the terrorist killed while trying to carry out an attack in Yerushalayim as well as the parents of the Islamic Jihad operative who was killed during an IDF operation in Jenin last Thursday, to offer his and the Palestinian people’s condolences. “May they rest in peace. They are the heroes of the Palestinian people,” he said.