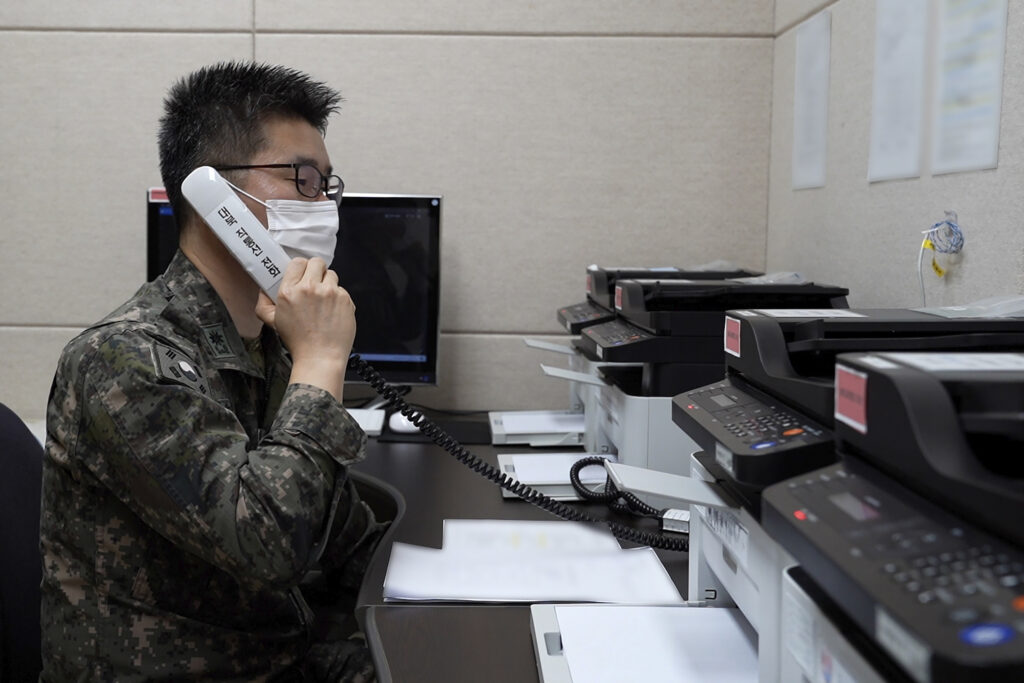 North Korea restored dormant communication hotlines with South Korea in a small, fragile reconciliation step Monday in an apparent hard push to win outside concessions with a mix of conciliatory gestures and missile tests.

It’s unclear how substantially the move will improve ties between the Koreas, as Pyongyang has a history of using the hotlines as a bargaining chip in dealings with Seoul. It often unilaterally suspended and then reactivated them when it needed better relations with its southern neighbor.

North Korean liaison officers answered phone calls by their South Korean counterparts over a set of cross-border government and military channels on Monday morning for the first time in nearly two months.

“Long time no talk. We’re very pleased because the communication channels have been restored like this. We hope that South-North relations will develop into a new level,” a Seoul official said during a phone conversation with his North Korean counterpart over one channel, according to video released by South Korea’s Unification Ministry.

The hotlines are phone and fax channels that the Koreas use to set up meetings, arrange border crossings and avoid accidental clashes. They’ve been largely stalled for more than a year as the North cut off them in protest of South Korean civilian leafleting campaigns. Communications were briefly revived for about two weeks this summer, but North Korea later refused to exchange messages again after Seoul staged annual military drills with Washington that Pyongyang views as an invasion rehearsal.

Some experts question the sincerity of such an overture because it came as North Korea renewed missile tests after a six-month hiatus. Kim Yo Jong has also said South Korea must abandon “double-dealing standards” and a “hostile viewpoint” if it truly wants improved ties, a position largely echoed by her brother.

The experts say North Korea is trying to use South Korea’s desire to improve ties to pressure it to convince the United States to relax punishing economic sanctions on the North. Others say North Korea wants South Korea not to criticize its ballistic missile tests, which are banned by U.N. Security Council resolutions, in part of its efforts to receive international recognition as a nuclear weapons state.

“The South Korean authorities should make positive efforts to put the North-South ties on a right track and settle the important tasks which must be prioritized to open up the bright prospect in the future, bearing deep in mind the meaning of the restoration of communication lines,” the North’s official Korean Central News Agency said ahead of the hotline’s restoration.

Lee Jong-joo, a spokeswoman for the Unification Ministry, said Seoul hopes the two Koreas would reopen official talks soon on improving ties based on the stable operation of the hotlines.

It’s not clear if the North will get what it wants from its pressure campaign. Kim Jong Un has said he won’t return to talks with the United States unless it drops its “hostile policy,” an apparent reference to the sanctions. The United States, for its part, has offered talks “anywhere and at any time” without preconditions, a stance that Kim last week described as a “cunning” attempt to conceal U.S. hostility against North Korea.

The nuclear diplomacy between Pyongyang and Washington collapsed in early 2019 due to disputes over exchanging sanctions relief with denuclearization steps. Despite its recent streak of weapons tests, North Korea still maintains a self-imposed 2018 moratorium on testing long-range missiles that directly threatens the U.S. mainland, an indication that it doesn’t want to scuttle prospects for future diplomacy with the U.S.