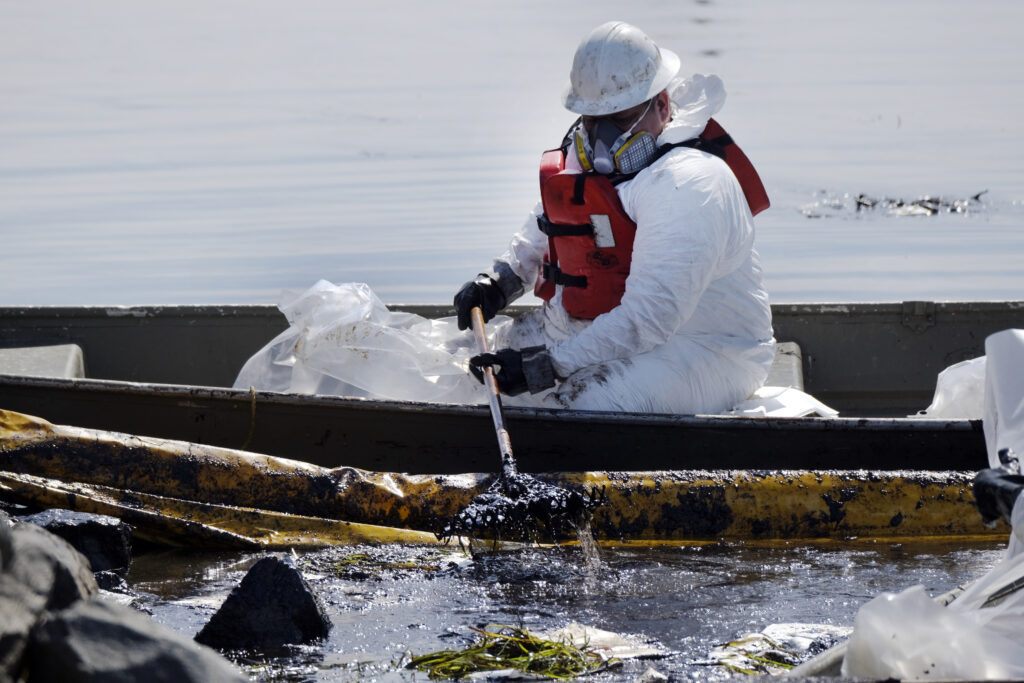 Crews on the water and on shore worked feverishly Sunday to limit environmental damage from one of the largest oil spills in recent California history, caused by a suspected leak in an underwater pipeline that fouled the sands of famed Huntington Beach and could keep the beaches there closed for weeks or longer.

Booms were deployed on the ocean surface to try to contain the oil while divers sought to determine where and why the leak occurred. On land, there was a race to find animals harmed by the oil and to keep the spill from harming any more sensitive marshland.

He said the 17.5-mile (28.16-kilometer) pipeline that is 80 to 100 feet (24 to 30 meters) below the surface was suctioned out so no more oil would spill as the location of the leak was being investigated.

Huntington Beach Mayor Kim Carr said the beaches of the community nicknamed “Surf City” could remain closed for weeks or even months. The oil created a miles-wide sheen in the ocean and washed ashore in sticky, black globules.

“In a year that has been filled with incredibly challenging issues, this oil spill constitutes one of the most devastating situations that our community has dealt with in decades,” Carr said. “We are doing everything in our power to protect the health and safety of our residents, our visitors and our natural habitats.”

Some birds and fish were caught in the muck and died, Orange County Supervisor Katrina Foley said. But by early afternoon Saturday the U.S. Coast Guard said there so far was just one ruddy duck that was covered in oil and receiving veterinary care. “Other reports of oiled wildlife are being investigated,” the Coast Guard said in a statement.

Crews led by the Coast Guard-deployed skimmers laid some 3,700 feet (1,128 meters) of floating barriers known as booms to try to stop more oil from seeping into areas including Talbert Marsh, a 25-acre (10-hectare) wetland officials said.

A petroleum stench permeated the air throughout the area.

The oil will likely continue to wash up on the shore for several days and affect Newport Beach and other nearby communities, officials said.

Elly began operating in 1980 in an area called the Beta Field. Oil pulled from beneath the ocean and processed by Elly is taken by the pipeline to Long Beach.

The spill comes three decades after a massive oil leak hit the same stretch of Orange County coast. On Feb. 7, 1990, the oil tanker American Trader ran over its anchor off Huntington Beach, spilling nearly 417,000 gallons (1.6 million liters) of crude. Fish and about 3,400 birds were killed.