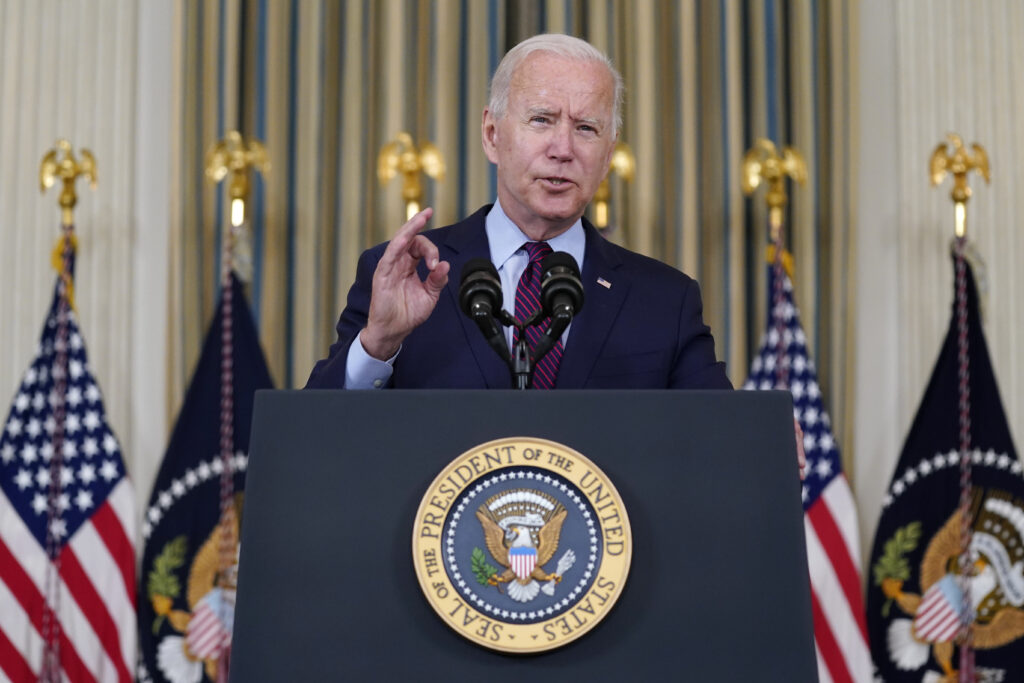 President Joe Biden accused Republican lawmakers on Monday of blocking efforts to increase the government’s borrowing authority, saying they’re playing “Russian roulette with the U.S. economy” by committing to filibuster the measure ahead of an Oct. 18 deadline.

Biden called on the Senate to suspend the nation’s debt limit by a simple majority, which would allow more borrowing and stave off the risk of a default. But Senate Republican Leader Mitch McConnell has said Democrats will need to use a special “reconciliation” process to secure a suspension from the evenly split Senate with Vice President Kamala Harris serving as the tiebreaker.

The president in White House remarks said that McConnell’s demand needlessly poses a threat to the international credit of the federal government, potentially hurting financial markets and the broader economy.

“Democrats will meet our responsibility and obligation in this country” without expecting outright help from Republicans, Biden said. “Just get out of the way and let us pass it.”

McConnell dug in Monday with his own letter to Biden.

“We have no list of demands. For two and a half months, we have simply warned that since your party wishes to govern alone, it must handle the debt limit alone as well,” McConnell said.

In the public fight over the debt limit, both parties are ratcheting up the public pressure ahead of a deadline just two weeks away. Neither side believes a default is actually coming, yet they’re trying to score political points against the other side on issues of fiscal responsibility and public accountability.

Oct. 18, two weeks away, is the date, that Treasury Secretary Janet Yellen says the government will exhaust its cash reserves, an event she says would likely trigger a financial crisis and economic recession. But it would be unwise to come anywhere close, Senate Majority Leader Chuck Schumer warned on Monday.

“The consequences of even approaching the X date could be disastrous for our economy and devastating to American families, raising the costs of borrowing for average Americans and hampering our economic recovery over the long-term,” Schumer said in a letter Monday to Democratic senators.

Democrats and Republicans are in a standoff over how to handle an extension for the debt ceiling. Republicans are insisting that Democrats go it alone with a legislative tool that already is being used to try and pass Biden’s plan to boost safety net, health and environmental programs. Democrats say that extending the debt limit has traditionally been a bipartisan effort and that the debt cap, now at $28.4 trillion, was built up under presidents from both parties.

Schumer said that if the debt issue is not resolved this week, the Senate will likely be forced to remain in session during the weekend and possibly the following week when senators were scheduled to be back in their home states.

Schumer also discussed the current state of play with the bipartisan infrastructure bill that has already passed the Senate and is stuck in the House as well as Biden’s larger, $3.5 trillion effort focused on social programs and the environment. He noted that the president visited with House Democrats on Friday to generate support for both measures.