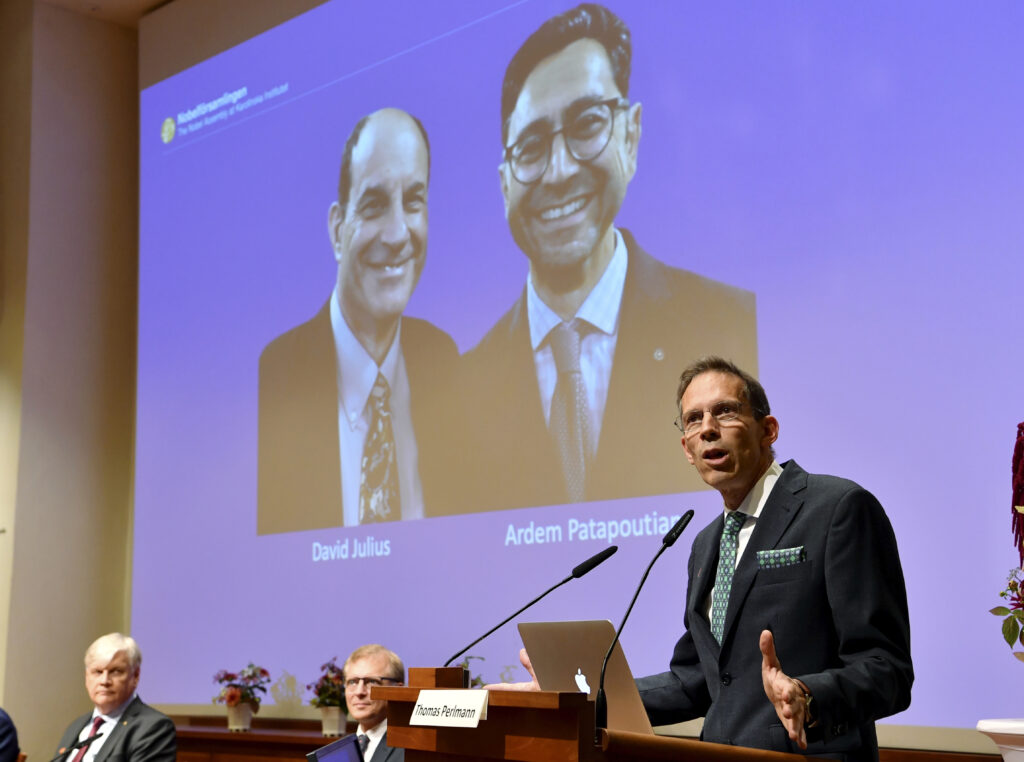 Two scientists won the Nobel Prize in medicine on Monday for their discoveries into how the human body perceives temperature and touch, revelations that could lead to new ways of treating pain or even heart disease.

Americans David Julius and Ardem Patapoutian separately identified receptors in the skin that respond to heat and pressure, and researchers are working on drugs to target them. Some hope the discoveries could eventually lead to pain treatments that reduce dependence on highly addictive opioids. But the breakthroughs, which happened decades ago, have not yet yielded many effective new therapies.

Julius, of the University of California at San Francisco, used capsaicin, the active component in chili peppers, to help pinpoint the nerve sensors that respond to heat, the Nobel Committee said. Patapoutian, of Scripps Research Institute at La Jolla, California, found pressure-sensitive sensors in cells that respond to mechanical stimulation.

“This really unlocks one of the secrets of nature,” said Thomas Perlmann, secretary-general of the committee, in announcing the winners. “It’s actually something that is crucial for our survival, so it’s a very important and profound discovery.”

The committee said their discoveries get at “one of the great mysteries facing humanity”: how we sense our environment.

The choice of winners underscored how little scientists knew about that question before the discoveries — and how much there still is to learn, said Oscar Marin, director of the MRC Centre for Neurodevelopmental Disorders at King’s College London.

“While we understood the physiology of the senses, what we didn’t understand was how we sensed differences in temperature or pressure,” Marin said. “Knowing how our body senses these changes is fundamental because once we know those molecules, they can be targeted. It’s like finding a lock, and now we know the precise keys that will be necessary to unlock it.”

Marin predicted that new treatments for pain would likely come first, but that understanding how the body detects changes in pressure could eventually lead to drugs for heart disease, if scientists can figure out how to alleviate pressure on blood vessels and other organs.

Richard Harris, of the Chronic Pain and Fatigue Research Center at the University of Michigan, also said the new laureates’ work might help design new pain medications, but noted the field has long been stalled.

He said that because pain also includes a psychological component, simply identifying how it is triggered in the body isn’t necessarily enough to address it. Still, he said Julius’ and Patapoutian’s work would likely help doctors better treat pain that is caused by things like extreme temperatures and chemical burns.

“Their discoveries are giving us the first inkling of how this type of pain starts, but whether it’s involved in many chronic pain patients remains to be seen,” he said.

Still, Fiona Boissonade, a pain specialist at the University of Sheffield, said the Nobel laureates’ work was especially relevant for the one in five people globally that suffer from chronic pain.

Such pain — including from arthritis, migraines and chronic back problems — “is a huge medical problem, and it’s quite poorly treated across the board,” she said. “Their research may lead us to identify new compounds that are effective in treating pain that don’t come with the devastating impact of opioids,” which have spawned a crisis of addiction in the U.S.

In keeping with a long tradition of difficulties in alerting Nobel winners, Julius said he was awakened by what he thought was a prank phone call shortly before the prize was announced.

“My phone sort of bleeped, and it was from a relative who had been contacted by somebody on the Nobel Committee trying to find my phone number,” he said from his home in San Francisco, where it was the middle of the night.

It was only when his wife heard Perlmann’s voice and confirmed it was indeed the secretary-general of the committee who was calling, that he realized it wasn’t a joke. Julius said his wife had worked with Perlmann years ago.

Julius, 65, later said he hoped his work would lead to the development of new pain drugs, explaining that the biology behind even everyday activities can have enormous significance.

“We eat chili peppers and menthol, but oftentimes, you don’t think about how that works,” he said.

“A day to be thankful: this country gave me a chance with a great education and support for basic research. And for my labbies and collaborators for partnering with me,” Patapoutian, who was born in Lebanon, tweeted.

When the team made the discovery in 2009, “we were of course so excited and literally jumping up and down. It was something we were looking for years,” Patapoutian said at a news conference.

Patapoutian is paid by the Howard Hughes Medical Institute, which also supports The Associated Press’ Health and Science Department. Julius is an HHMI trustee.

The prestigious award comes with a gold medal and 10 million Swedish kronor (over $1.14 million). The prize money comes from a bequest left by the prize’s creator, Swedish inventor Alfred Nobel, who died in 1895.

The prize is the first to be awarded this year. The other prizes are for outstanding work in the fields of physics, chemistry, literature, peace and economics.