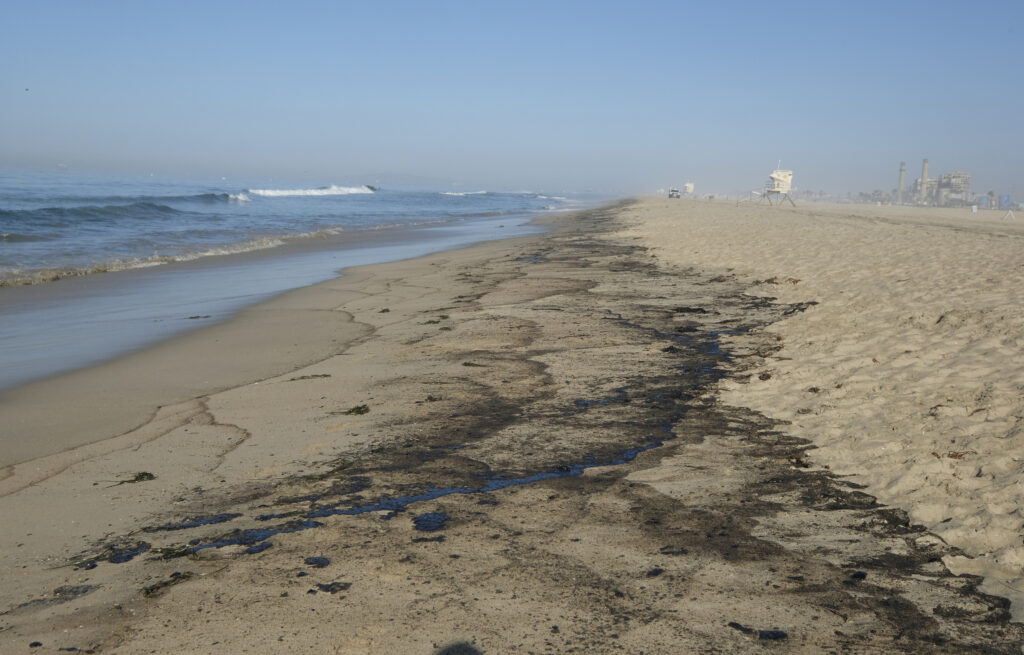 One of the largest oil spills in recent Southern California history fouled popular beaches and killed wildlife while crews scrambled Sunday to contain the crude before it spread further into protected wetlands.

At least 126,000 gallons (572,807 liters) of oil spilled into the waters off Orange County, according to a statement from the city of Huntington Beach.

“The spill has significantly affected Huntington Beach, with substantial ecological impacts occurring at the beach and at the Huntington Beach Wetlands,” the statement said.

The oil created a miles-wide sheen in the ocean and washed ashore in sticky, black globules along with dead birds and fish. Crews led by the U.S. Coast Guard deployed skimmers and floating barriers known as booms to try to stop further incursion into the wetlands and the Bolsa Chica Ecological Reserve.

Officials canceled the final day of the annual Pacific Air Show that typically draws thousands of spectators to Huntington Beach, a city of about 199,000 residents about 30 miles (48 kilometers) south of downtown Los Angeles. The show featured flyovers by the U.S. Navy Blue Angels and the U.S. Air Force Thunderbirds.

Foley said Newport Beach Mayor Brad Avery told her that he encountered the oil slick while in a boat traveling back to the mainland from Santa Catalina Island. “He saw dolphins swimming thru the oil,” Foley tweeted.

The Huntington Beach statement early Sunday said “while the leak has not been completely stopped, preliminary patching has been completed to repair the oil spill site,” with additional repairs planned.

The spill comes three decades after a massive oil leak hit the same stretch of Orange County coast. On Feb. 7, 1990, the oil tanker American Trader ran over its anchor off Huntington Beach, spilling nearly 417,000 gallons (1.6 million liters) of crude. Fish and about 3,400 birds were killed.

At a news conference Saturday night, Orange County officials expressed concern about the environmental impacts of the spill and hoped crews could stop the oil before it flowed into sensitive wetlands.

“We’ve been working with our federal, state and county partners to mitigate the impact that could be a potential ecological disaster,” Huntington Beach Mayor Kim Carr said.

Huntington State Beach is home to a number of species of birds, including gulls, willet, long-billed fletcher, elegant teens and reddish egret, which are a rarity on the west coast, according to Ben Smith, a biologist and environmental consultant for Orange County.

Smith drove to the beach Sunday to observe wildlife ahead of a construction project planned at the mouth of the Santa Ana River, which flows into the ocean at the border of Huntington State Beach and Newport Beach.

“There’s tar everywhere,” he told the Los Angeles Times. “You think by now we would have figured out how to keep this kind of thing from happening, but I guess not.”