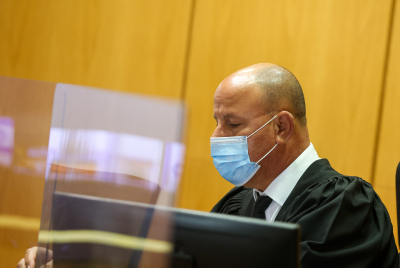 The Northern District Attorney’s Office filed an indictment with the Nazareth Magistrate’s Court on Sunday against the six prisoners who broke out of the Gilboa Prison on Sept. 6.

The failure of the Israel Prisons Service to prevent the breakout overshadowed the Shin Bet’s and IDF’s success at recapturing them within about two weeks and has led to an impending state commission of inquiry.

Already there is a high likelihood that the head of Gilboa Prison will be fired, and some have called for the firing of the IPS Chief Katy Perry.

The State Attorney’s Office on Wednesday filed a statement of prosecution against the prisoners who escaped, as well as against five additional inmates who aided them.

One surprise was that the final filed charges did not contain some of the new terror-related charges which had been leaked to the media by police and security forces but focused solely on the actions of illegal fleeing confinement.

Of the six escapees, the most prominent was Zakaria Zubeidi, a Fatah commander who was responsible for multiple terrorist attacks and for killing many Israelis.

Munadil Nafayat, Iham Kahamji, Yaquob Qadiri, and brothers Mahmoud and Mohammed al-Arida were the other escapees – all of them members of Palestinian Islamic Jihad and from towns near Jenin.

The escape exposed a series of failures at the prison, including that the IPS didn’t learn lessons from a previous escape attempt at the prison, as well as several other major issues.

These include sleeping guards, unmanned watchtowers due to a shortage of staff and the sense of boldness security prisoners feel vis-à-vis the guards.

The investigation of the incident – the worst jailbreak in Israel’s history – is headed by the Lahav 433 Major Crimes Unit.