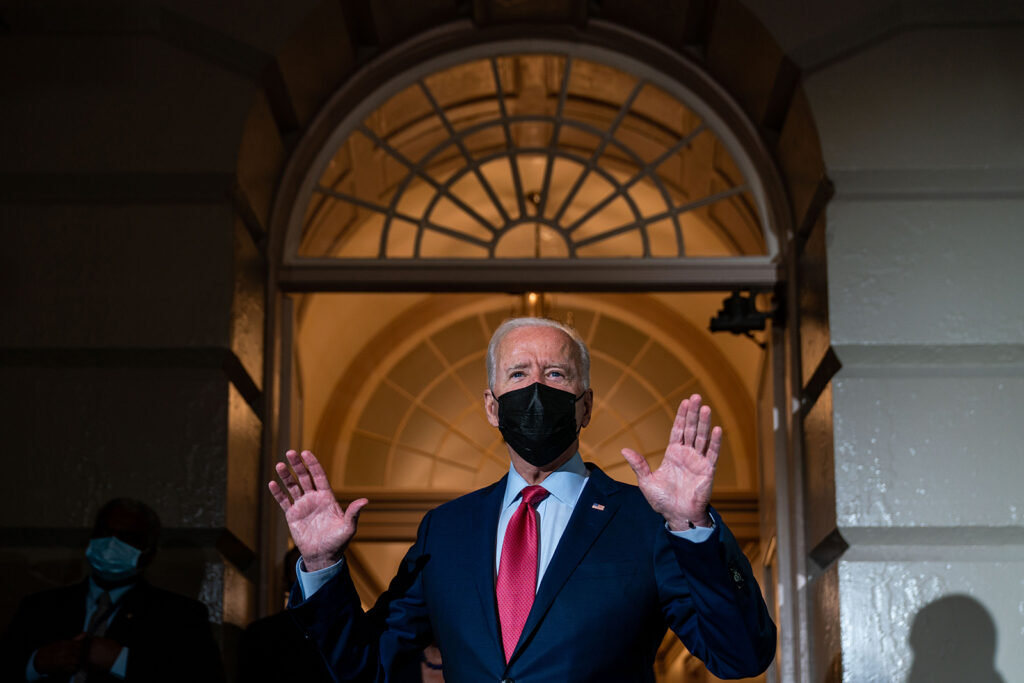 President Joe Biden’s sweeping economic agenda faces an uncertain future in Congress after he failed this week to unify his own party around a strategy to pass a bitterly contested infrastructure plan that’s one of his top priorities.

Biden seeks the $550 billion investment in U.S. roads, railroads, bridges and other public works to fulfill a signature piece of the economic revival he promised in his 2020 campaign. And its passage would provide a much-needed victory after months of setbacks.

But now, going home to face voters without enacting the president’s economic agenda has become an underlying fear for some congressional Democrats.

After passing the Senate to fanfare in August, the bipartisan infrastructure bill hangs in the balance as Democrats quarrel over a $3.5 trillion tax-and-spending package that forms the heart of his economic agenda. A House vote on the public works bill was postponed again on Friday, and Biden visited the Capitol to tell lawmakers to take their time — a disappointing message for centrists eager to boast about the legislation for the midterm elections.

The roads-and-bridges plan has become a “legislative pawn, which is regrettable,” said Tom Daschle, a former Senate majority leader. “The thing that gives me some hope and optimism is there is a realization on the part of Democrats that this is essential. If we fail to do this, we might as well just go home.”

The infrastructure package alone would do more for the nation’s roads and bridges, water and internet access than has been done since the New Deal, said D.J. Gribbin, who was President Donald Trump’s top aide on infrastructure issues.

Biden himself has lashed together the fate of the infrastructure plan and the much larger social-spending and tax package. He’ll continue engaging with lawmakers over the weekend and plans to take his case to the American public, White House Press Secretary Jen Psaki said in a statement on Saturday.

“I’m going to be going around the country this week making the case why this is so important,” Biden told reporters at the White House. “I think we will get it done with plenty of time for it to be part of changing the tax code for people next year.”

The president’s public approval rating has eroded in recent weeks, after the coronavirus delta variant touched off a resurgence of the pandemic he’d declared all but defeated, the chaotic and deadly U.S. withdrawal from Afghanistan and the appearance of thousands of Haitian migrants on the Texas border.

Just 43% of Americans approved of Biden’s performance in September, down 14 points from his high-water mark in April, according to Gallup.

“Afghanistan is a loser for Biden. So is immigration,” said Frank Luntz, a pollster who typically works for Republicans. “We won’t know about COVID until this winter, but he has done everything humanly possible to get people vaccinated, so he will not be responsible if things go badly.”

Celinda Lake, who runs Lake Research Partners and served as one of the leading pollsters for Biden’s 2020 campaign, said that voters are hearing too much about congressional procedure and too little about what Biden’s economic plans would do.

“Americans feel like we are not getting anything done, and the biggest point people make is they want something done,” she said in an interview. “Honestly, all of this process talk, including the discussion of the amounts of money, is nonsensical to voters. It is amazing we are talking about the amount of money instead of what it buys.”

Yet that’s a consequence of the thorny negotiations Biden’s had to navigate, which require finding a topline cost for the social spending plan that’s acceptable to two centrist Democrats in the Senate, Kyrsten Sinema of Arizona and Joe Manchin of West Virginia.

House progressives say they won’t support the public works bill until Sinema and Manchin agree to pass the larger legislation — a collection of education and support programs for low- and middle-class families as well as new measures to fight climate change.

On Friday at the Capitol, Biden told House Democrats that if he had the votes to pass the infrastructure plan now, he and Speaker Nancy Pelosi would do it and move on to the social-spending bill, according to a person familiar with his closed-door remarks. But they don’t, he said, so he sided with progressives who want to keep the two measures connected.

“He is the president of the United States and he says that he wants to get this done. And he basically linked them together,” Rep. Henry Cuellar of Texas said afterward.

In his talks with Manchin and Sinema, Biden said, the upper limit of the social-spending plan has ranged as high as $2.3 trillion over 10 years — more than $1 trillion less than liberals desire, but enough, Biden insisted, to make a profound difference in Americans’ lives.

The machinations on Capitol Hill have made for a confusing week, with the prognosis for Biden’s agenda changing hour-by-hour.

White House aides have tried to cast the maneuvering as the usual legislative process, though allies say that in private, they express anxiety about the president’s economic agenda failing.

As Biden left the Capitol on Friday afternoon without any clear plan to finish either piece of legislation, he gave reporters a thumbs-up sign. “We’re going to get it done,” he said.