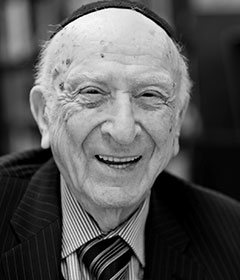 Rabbi Eliach, whose family lived in Yerushalayim for seven generations, originally learned in Chevron Yeshiva. During that time, he was a chavrusah of several people who later were known as Gedolei Yisrael. In addition, soon after the arrival of the relatively unknown Chazon Ish, zt”l, in Eretz Yisrael from Vilna, Rabbi Eliach merited to spend time with him in a ramshackle shanty in the newly formed city of Bnei Brak. He compiled his memories of those days in Mandate Palestine in a book titled Ha’avar Shelo Avar.

In 1943, while preparing to study for a career in law, he was asked to teach 70 of the 800 “Yaldei Teheran,“ some young orphaned children who were brought to what was then Palestine. Although the job was meant to last only a few weeks, he decided that these children needed guidance, and thus he began his long, storied career in teaching.

Rabbi Eliach served as the principal of Yeshiva of Flatbush (Joel Braverman High School) for many years, and even after officially retiring 25 years ago, he continued mentoring young rebbis and teachers.

The levayah is scheduled for Friday morning, 25 Tishrei/October 1 at 10:00 a.m. in Yeshiva of Flatbush, 1609 Avenue J in Brooklyn.

The aron will be transported to Eretz Yisrael on Motzaei Shabbos for kevurah.