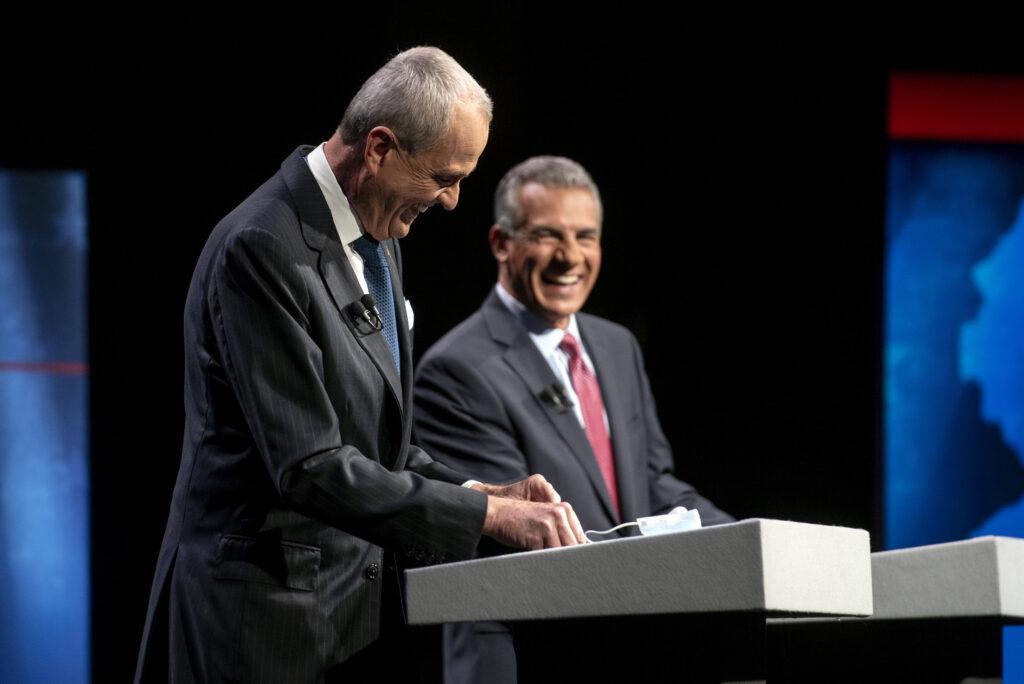 New Jersey’s first gubernatorial debate between Gov. Phil Murphy and Jack Ciattarelli offered a roadmap of where this contest is heading, with the Democratic Murphy yoking his Republican rival to Donald Trump, pressing Democrats’ advantage by defending his progressive agenda, while Ciattarelli hammered on high taxes and reached for the persuadable middle ground.

With the first-term incumbent leading in the polls and riding a considerable voter registration advantage, Murphy went on the attack in the debate Tuesday night, flashing an in-your-face style that emerged recently when he called a group of people protesting vaccines the “ultimate knuckleheads.”

It’s a contrast with the folksy style he typically deploys in regular COVID-19 news conferences and one that tracks more closely with his predecessor Chris Christie.

He tied Ciattarelli, a former state Assembly member, to the former president on masking and the vaccines.

Ciattarelli responded by bringing up Murphy’s comments about taxes, when he suggested that if high taxes bother people, New Jersey is not a good fit for them.

“Well, if you want to talk about disqualifiers, ‘If taxes are your issue, we’re probably not your state’ or saying that you want to make New Jersey the California of the East Coast — I consider those disqualifiers.”

Ciattarelli invoked the nearly 8,000 people who died in nursing homes during the outbreak, as well as the 30 who perished after recent flooding.

The debate underscored the choice before voters this fall.

Murphy represents a slate of progressive programs. He promises more funding for safety net programs, like state-financed pre-kindergarten and community college along with more funding for K-12 education. He’s also embraced COVID-19 countermeasures that some Republican governors in other states have rejected.

Ciattarelli is angling for voters who’ve had enough with creeping tax rates and long waits at Motor Vehicles Commission outposts and for unemployment checks. His approach on how to handle the outbreak is murky, though he’s said he opposes masking for young children and he agrees with Murphy’s decision to require teachers to get vaccinated or undergo regular COVID-19 testing.

Whether the debate moves any voters is unclear.

The state’s political makeup has grown more Democratic over the last roughly four years, with Democrats overtaking independents as the largest voting bloc and outnumbering Republicans by 1 million voters.

But the state has reelected Republican governors in recent decades while rejecting Democrats for second terms.

Murphy wants to stop that trend and become the first Democrat reelected in more than four decades. He’s also confronting another political current: New Jersey voters have rejected the party of the president who won in the preceding year’s election going back to 1985.

The governor has implied he’s aware of the history, saying that despite polls showing he’s leading, he plans to run as if he’s behind.

The election is Nov. 2, but in-person early voting will happen for the first time this year from Oct. 23-31. Mail-in ballots have already gone out to voters.

The next and final debate is Oct. 12.