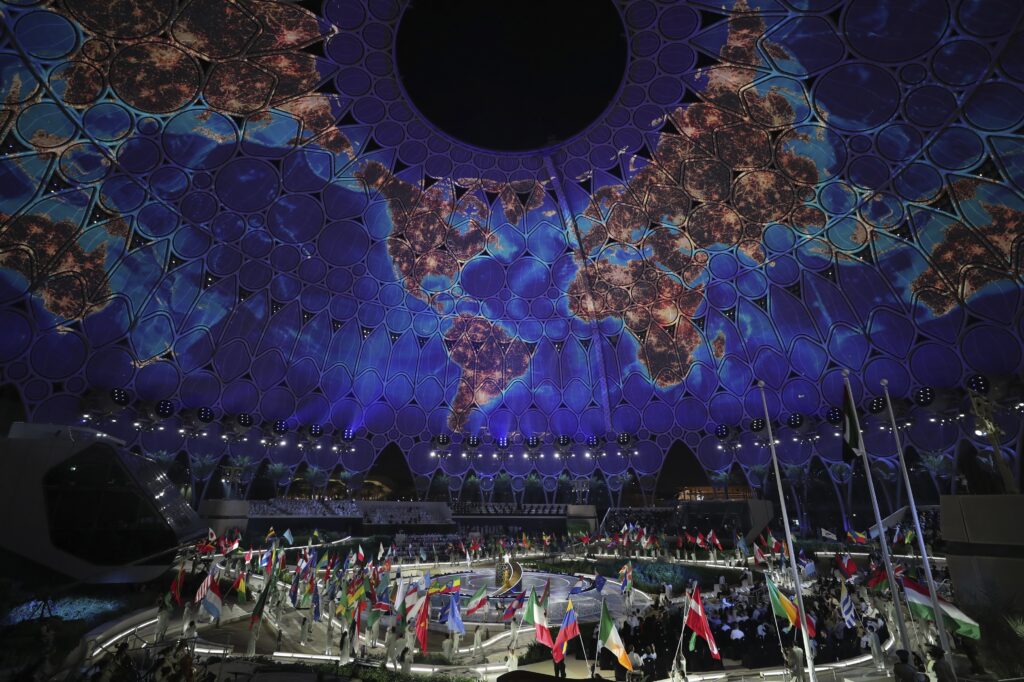 Dubai opened Expo 2020 in an extravagant ceremony Thursday that bathed the site’s signature central dome in light, a symbolic beacon for the city-state’s hopes that the world’s fair will draw tourists despite the coronavirus pandemic.

Delayed a year by the virus, Expo 2020 has over 190 countries taking part in the event that will last six months. The futuristic extravaganza, complete with individual pavilions feels like an entire city, built on what were once rolling sand dunes on Dubai’s southern edges.

After spending $7 billion on the site, Dubai hopes it will attract new businesses and draw more foreigners to buy properties in the commercial hub of the United Arab Emirates. However, it also renewed long-standing criticisms of this skyscraper-studded sheikhdom built largely by low-paid workers where speech and assembly remains strictly controlled.

The Expo site had a visible police presence Thursday before the ceremony, with security guards stationed at every corner.

Those attending passed through airport-style security screening all visitors to the event. As guests filtered through, speakers chirped with piped-in bird songs.

After months of insisting that visitors do not need to prove their vaccination status, Expo changed course in recent days and said who come need to show proof of vaccination or negative coronavirus tests. Those attending Thursday night’s gala opening similarly had to offer a negative test result in the last 24 hours. Questions remain over how many laborers on the site fell sick during its construction.

Dimitri S. Kerkentzes, the secretary-general of the Paris-based Bureau International des Expositions that oversees Expos, acknowledged the challenge of the coronavirus pandemic in a speech to those gathered.

“We have collectively overcome the hurdles and all persevered,” he said.

Just as Dubai prepared to open the Expo, the International Monetary Fund released a statement saying it expected the Emirati economy to see a “gradual recovery” after its gross domestic product fell by 6.1% in 2020. Higher oil prices, coupled with a 3% growth in the country’s non-oil economy, should help.

The IMF warned challenges remain, however.

“Uncertainty around the recovery remains globally and in the UAE … with a resurgence of the pandemic the key source of risk to the outlook,” the IMF said.

Analyst James Swanston at Capital Economics also warned that while Expo could provide a boost for Dubai, its real estate market remained oversupplied and billions in outstanding government debt remained a danger for the city-state.

“Dubai had pinned its hopes on the World Expo to boost its attractiveness as a destination for tourists and expatriate workers,” Swanston wrote. “We still think that the risk is the permanent effects of the Expo fail to live up to policymakers’ hopes.”