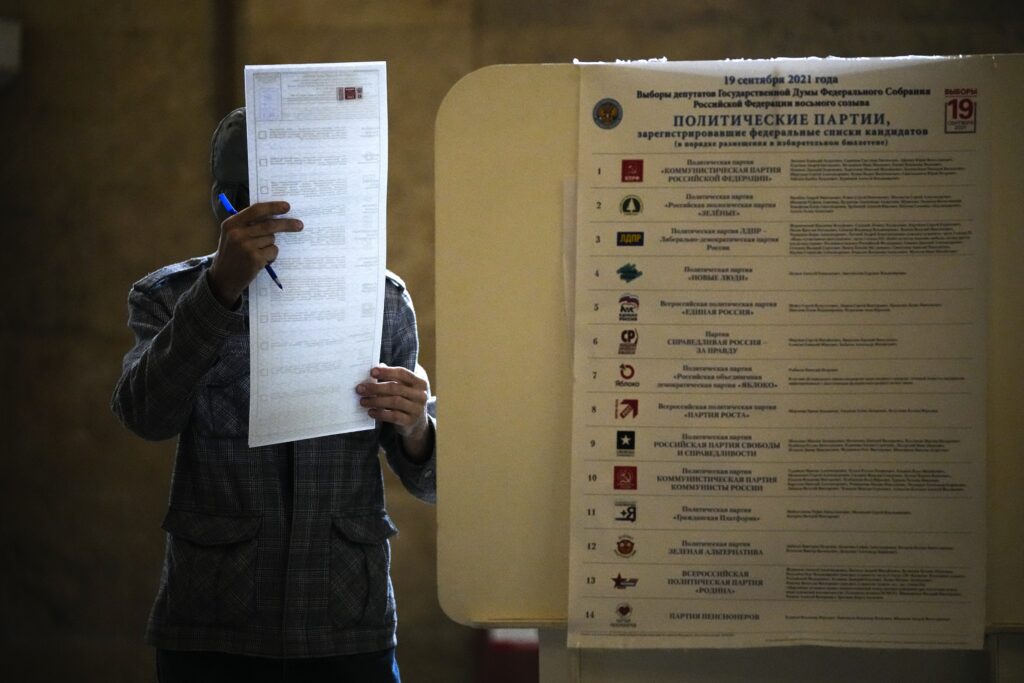 From the Baltic Sea to the Pacific Ocean, Russians across eleven time zones voted Sunday on the third and final day of a national election for a new parliament, a ballot in which the pro-Kremlin ruling party is largely expected to retain its majority after months of relentless crackdown on the opposition.

The vote so far has been marked by numerous reports of violations, including ballot-stuffing, inadequate security and pressure on election monitors.

The election is widely seen as an important part of Russian President Vladimir Putin’s efforts to cement his grip on power ahead of the 2024 presidential election, in which control of the State Duma, or parliament, will be key.

The vote this year has seen most opposition politicians and activists barred from running as Russian authorities unleashed a massive effort to suppress protests and dissent.

By Sunday afternoon — the last of the three days of voting the government allowed this year, citing coronavirus concerns — voter turnout was only more than 40% and polls in Russia’s far east and Siberian regions had already closed.

Reports of violations from Russian media, opposition politicians and election observers have been flowing since Friday morning, when unexpectedly long lines formed at polling stations in Moscow and other cities. Some of those queuing told reporters they were forced to vote by their employers, often a state-run institution.

Over the weekend, multiple videos of ballot-stuffing circled on social media. In some regions, incidents of “carousel voting” were reported — groups of voters casting ballots multiple times at different polling stations — as well as clashes between election monitors and poll workers.

Russia’s Central Election Commission chief Ella Pamfilova confirmed at least eight incidents of ballot-stuffing in six Russian regions. In all, the commission has so far invalidated 7,465 ballots in 14 regions.

Ahead of the election, Putin expressed hope that the Kremlin’s United Russia party retains its dominance in the parliament after the vote. The party currently holds 334 seats out of 450. However, a recent poll by the top independent pollster the Levada Center showed that just 27% of Russians are prepared to vote for the ruling party.

In recent months, authorities have unleashed a sweeping crackdown against opposition politicians and the Smart Voting strategy devised by the imprisoned opposition leader Alexei Navalny to consolidate the protest vote against United Russia.

Smart Voting increases opposition candidates’ chances of winning by telling voters which candidates in specific areas have the best chances at defeating ones backed by the Kremlin, and the authorities have made numerous attempts to wipe it off the internet.

About 50 websites run by Navalny have been blocked, including the one dedicated to Smart Voting.

Navalny’s allies ascribed the crackdown on Smart Voting and the reports of voting violations to the Kremlin’s lack of confidence in getting the result it wants: a two-thirds majority so United Russia will be able to change the Russian constitution.

“Either they’re so insecure and fear Smart Voting so much … or the ratings are even worse than we’ve seen, or they failed to keep their nerves in check — but the level of blatant falsifications have turned out to be even higher than in 2011,” Navalny’s top strategist Leonid Volkov wrote on Facebook.

In the 2011 election, reports of mass vote rigging in Russia’s parliamentary elected triggered months of anti-government and anti-Putin protests.