Gantz: Iran Is Training Militias to Employ Advanced UAVs, in a Base Called Kashan

Defense Minister Benny Gantz delivered remarks at the annual International Institute for Counter-Terrorism (ICT) Conference at Reichman University on Sunday, in which he warned that Iran was training terrorists from multiple countries on the use of attack drones at an air base within the Islamic Republic.

“Iran has developed ‘proxy terror’ which is perpetrated by organized ‘terror armies’ which are assisting Iran in achieving its economic, political and military goals. One of the most significant tools employed by Iran and its proxies is UAVs with a range of thousands of kilometers. Hundreds of these UAVs are spread across Yemen, Iraq, Syria and Lebanon. Iran is also attempting to transfer the know-how needed for UAV production to Gaza.” 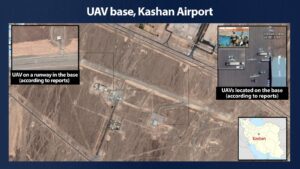 Gantz revealed that “the Kashan base located north of the city of Isfahan is used to train terrorists from Yemen, Iraq, Syria and Lebanon. These terrorists are trained to employ UAVs produced by Iran. This base is a key point from which Iranian aerial terrorism is exported to the region.”

On the issue of the IAEA reports published in recent days, which for the first time in a decade cast doubt on the civilian nature of Iran’s nuclear program and the various violations perpetrated by Iran such as the attack on Mercer Street, Gantz said:

“Iran does not honor the agreements it has signed, and there is no reason to believe that it will honor any future agreements. The time has come for action. I call on the countries that are still members of the nuclear agreement to impose the sanctions set out in the agreement. It’s time to make a ‘snapback.’

“The efforts against Iran, as well as against Afghanistan and other countries, are not just interests for the Middle East or for the West. Proxies can be set up anywhere in the world. This is the time for all the world’s powers, including Russia and China, to join the campaign to maintain global stability.”

Regarding developments in Israel in recent days, Gantz said: “I commend all the forces on the ground that are participating in the operation to capture the terrorists who escaped from prison, working around the clock and achieving our goals. We will continue the search for the two remaining terrorists by all means and with joint forces.”

Gantz added, “Israel has no intention to harm Palestinian residents in Yehudah, Shomron or the Gaza Strip. We are promoting measures for economic and social development. This being said, if terrorist organizations try to take advantage of the situation, and act against the interest of most of the Palestinians who want to continue the trend of economic development and stability – they will be the first to be charged a price.”