AUTO REVIEW: Why Buy a 2022 Toyota Corolla Cross SUV? Did I Mention It’s a Toyota?

Toyota swings for the infield with the 2022 Corolla Cross, a subcompact SUV hitting the market this fall with singularly modest aspirations.

Sized between the quirky C-HR and mega-selling RAV4, the Cross’ bid for buyers’ attention seems to rest on the Toyota and Corolla badges’ well-earned familiarity and respect rather than clear leadership in features, performance or technology.

The five-passenger SUV will need every drop of goodwill it can wring from the Toyota and Corolla names to stand out in a segment that includes vehicles like the Chevrolet Trailblazer, Honda HR-V, Hyundai Kona, Kia Seltos, Subaru Crosstrek and VW Taos.

I recently spent a day driving several trim and equipment levels of Corolla Cross in and around Austin, Texas. The Cross is scheduled to go on sale in October. Toyota builds it in a new Huntsville, Alabama, plant the automaker shares with Mazda.

The Corolla Cross uses the same TNGA C (for compact) architecture as the Corolla sedan, modified for all-wheel drive, towing and other characteristics associated with SUVs. It’s been on sale in other parts of the world for a year, arriving in the U.S. now because of extra time developing the AWD version, which adds an independent rear suspension as well as the ability to send up to 50% of power to the rear wheels.

The Corolla Cross is Toyota’s second subcompact SUV in the U.S., following the smaller C-HR, which was developed to compete with the quirk-forward Nissan Juke. Neither the Juke nor C-HR offered AWD, making them SUVs with an asterisk, in my mind. Nissan has dropped the Juke, but the C-HR remains.

While the C-HR’s offbeat looks, smaller size and lack of AWD make it a niche vehicle, Toyota expects the Corolla Cross to become one of its U.S. mainstays. Toyota can build about 150,000 a year in its half of the plant it shares with Mazda. Output probably won’t reach that level until 2023, because of a pandemically cautious production plan.

Mazda will also build a small SUV in Huntsville. Name, features, etc., TBA. Production begins in the first quarter of 2022. 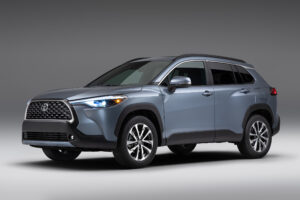 How Much? What Features Do You Get?

Corolla Cross prices start at $22,195 for a front-wheel drive model. All Crosses get Toyota’s unique take on a continuously variable transmission, which features a fixed-ratio first gear the automaker believes improves the driving experience.

All-wheel drive is available on all three trim levels. It costs $1,300. Toyota expects about half of sales to be AWD.

The base price is a cool $2,120 more than the starting price for a base 2022 Corolla sedan, even before you started adding goodies like AWD to half of sales or more.

Therein lies the reason automakers are deserting sedans for SUV-style vehicles. Most customers prefer SUVs, which tend to offer a higher seating position and a more appealing image than sedans.

The price difference isn’t all markup. The Cross is roomier and offers more features than the Corolla sedan.

Toyota’s not in this for its health, though. The Corolla Cross is probably at least two to three times as profitable as a Corolla sedan.

That’s true of all automakers’ small SUVs. Whether it be the Chevrolet Cruze, Hyundai Elantra or Nissan Sentra, every manufacturer makes more on the small SUVs that are rapidly replacing compact and subcompact cars.

For the purposes of this column, I’m focusing on an AWD XLE that offered just about every available feature. 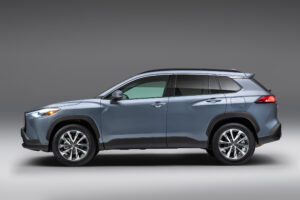 The Corolla Cross is competent, but unexciting. That could be just about every one of the 50 million-plus Corollas Toyota has sold since 1966, so the little SUV is solidly on-brand.

The 2.0L engine provides adequate power, but labors a bit and gets loud on hills and accelerating in traffic.

The engine produces 169 hp and 150 pound-feet of torque. Neither figure leads the class. Torque output — which translates most directly to throttle response and acceleration — trails all but the HR-V and Rogue Sport, the only other non-turbocharged engines in the group.

An upcoming hybrid model will almost certainly be the line’s designated performance model. More info on it is expected in 2022.

The CVT is effective and unobtrusive.

The Cross’ fuel economy isn’t listed on the official EPA website yet, so Toyota’s claimed figure of 30 mpg in combined city and highway driving is not yet official. It leads the competition by 1-2 mpg, however.

The Corolla Cross’ steering is not notably direct or responsive. Ride smoothness differs between FWD models, which have a torsion beam rear axle, and the more sophisticated independent rear suspension on AWD Crosses. The all-wheel drive system can send 10%-50% of torque to the rear axle. It adds about 170 pounds.

The Corolla Cross can tow up to 1,500 pounds, best in a class where most models do not recommend towing at all.

The front seat is accommodating, with easy-to-use controls. Toyota provides dials to control volume, tuning, temperature and fan speed, not to mention buttons for defrost and recirculation.

A 7-inch touchscreen rising from the center stack is standard. The LE and XLE that account for most sales get an 8-inch screen. Wired Apple CarPlay and Android Auto are standard.

The door uppers and armrests are padded.

Rear legroom is minimal, and the rear door openings are a bit narrow for easy exit.

Upper models get an attractive LED instrument cluster. The base L has mechanical gauges and a small digital driver information center.

The base model’s cargo compartment measures 26.5 cubic feet behind the rear seats, one of the largest among subcompact SUVs. That bragging point diminishes as you add some common features, however. A Corolla Cross with sunroof — available on the LE and XLE — and all-wheel drive has 24.6 cubic feet of storage behind the rear seat, placing it squarely mid-pack in its class.

2022 Toyota Corolla Cross At a Glance