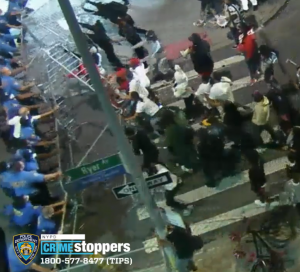 A protest at a police precinct in the Bronx turned ugly on Friday night, when a vandal poured liquid believed to be gasoline on an occupied police van.

Around 10:30 p.m. Friday night, a group of people approached the 46 Precinct Station House in protest of an August 29 shooting that culminated in the NYPD shooting two armed men dead after the officers and the two men exchanged fire.

The protest began to turn aggressive, with the crowd pushing back at the barricades and throwing eggs at a marked police van. At one point, an unknown individual with a red gas can doused the van with what police said was gasoline.

Police in the van drove off before further damage could be done. No one was injured, and the vandal remains at large.