Sifrei Torah were destroyed, basements flooded, and homes and shuls were damaged in Williamsburg, which experienced some of the heaviest effects of Tropical Depression Ida on Wednesday night.

Williamsburg Shomrim received “thousands of calls,” coordinator Yanky Itzkowitz told Hamodia. “Of course, we couldn’t handle all, so we took the highest priority ones first.”

Shomrim members rescued people trapped in flooded cars and basements, bringing them to safety. “When we went to vehicles to open doors, some of the streets had five feet of water,” Itzkowitz said.

There were also calls for flooded offices, homes and schools. Shomrim and Chaveirim members were pumping out homes until 5 a.m.

“Dozens of basements in Williamsburg are destroyed,” Itzkowitz said. “But Baruch Hashem there have been no injuries.”

Shomrim also received some calls from upstate buses coming from Monroe and stuck in the highway, but the BQE was shut due to an accident, so Shomrim could not reach the buses, which were rescued by police and Fire personnel.

Itzkowitz also assisted in removing four sifrei Torah from the Sambuer shul, located in a basement at Wallabout Street and Marcy Avenue. The sifrei Torah were brought to a nearby shul and laid out to dry.

The rav of the shul told Hamodia on Thursday that the day before the storm he had called several sewer specialists to check on the shul, and they determined sewer system was fine.

“We kept checking; fifteen minutes before storm came, it was all clear,” the rav said. But when the storm came, the water quickly “came in all the way to the ceiling.”

The shul had four sifrei Torah, all of which were damaged.

The rav says that one of the shul’s sifrei Torah was partially written by Harav Yitzchak Elchanan Spektor (1817-1896), the legendary rav of Kovno.

“I bought that sefer Torah from the great-grandson of the heilege tzaddik Reb Yitzchak Elchanan, who had written Bereishes, Shemos and Vayikra. And in that sefer Torah, the water damaged only Bamidbar and Devarim,” the rav said, his voice cracking. “It’s a heilege ma’aseh.”

The rav has consulted with two sofrim, who say the damaged sifrei Torah are unsalvageable.

“It was all destroyed,” said the rav. “There’s not even one sefer left in the shul. You cannot even get one siddur.”

The rav said that the insurance company maintain that flood damage is not covered under its policy.

“The shul will be open for Rosh Hashanah,” the rav said. “People are calling and offering us 20 chumashim here, 50 siddurim there. We still need tables and chairs. We can use anything and everything.” 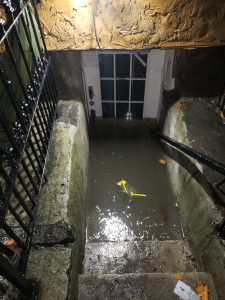 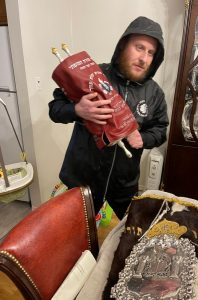 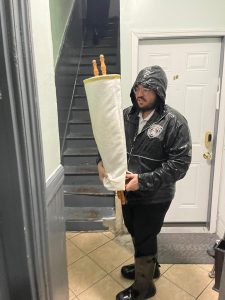