AUTO REVIEW: Here’s a Last Look at the 2021 Mazda 6 as It Slinks Toward Sedan Extinction

Don’t make me the bad guy. I care about extinction. I’ve adopted manatees and whales, donated to help giant pandas and black rhinos.

But I have a hard time caring that midsize sedans are an endangered species. This makes me an outlier among auto writers who can be accused of overvaluing characteristics like acceleration and skidpad ratings versus passenger space and ease of entry, even in vehicles for which Jobs 1-4 are carrying families and groceries reliably and in comfort.

Midsize sedans are dropping like flies as customers — and in turn automakers— fancy turns to SUVs. The list of the nearly departed continued to grow as Mazda and VW recently announced the impending demise of the 6 and Passat sedans, respectively.

I drove a well-equipped 2021 Mazda 6 to Chicago and back recently. The trip reminded me why some of my colleagues mourn sedans, but didn’t change my mind.

What’s New, How Much?

The Mazda 6 is one of the best-looking midsize family sedans: sleek, relatively low, long nose, short deck, flowing lines and a sporty forward-leaning stance. Competition includes the Chevrolet Malibu, Honda Accord, Hyundai Sonata, Kia K5, Nissan Altima, Subaru Legacy, Toyota Camry and VW Passat. The pack has been thinned recently, and no doubt will be further until the available supply falls to a level consistent with profitable demand.

The 6 got its last significant updates in the 2018 model-year. They included a 2.5L turbocharged engine, Apple CarPlay and Android Auto.

Standard features on the 2021 6 include LED headlights and taillights, six-speaker audio and a wide range of driver-assistance and safety features.

The 6 would probably have been replaced with a new model in the next 18 months if Mazda hadn’t decided to drop it in favor of better-selling SUVs. The brand’s CX-5 compact SUV, for instance, costs about the same but outsold the 6 better than 9 to 1 through July 2021.

Mazda 6 prices start at $24,475. All 6s have front-wheel drive. A 187-horsepower normally aspirated engine is standard. I tested a top-of-the-line Signature model with a turbocharged version of the same engine that produces 227 hp and a healthy 310 pound-feet of torque with regular gasoline. You can bump the turbo’s output to 250 hp and 320 pound-feet with premium fuel.

The fact that Mazda tells its owners exactly how much more power they’ll get with the more-expensive fuel speaks to the image the brand likes to communicate: It’s the place to go for practical affordable vehicles that cater to the enthusiast more than brands like Honda and Toyota, which sell vastly higher numbers of their midsize sedans.

Mazda takes that mission seriously, but there’s a limit to how much performance you can deliver and remain competitive in terms of price and other features. Low-luxury brands like Acura and Infiniti pressured models like the 6 from above, while Honda, Toyota, Kia and Hyundai’s continual improvement squeezed them from below. 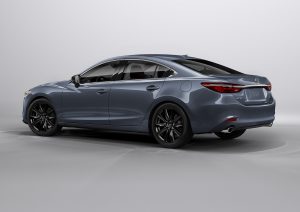 The 6 got squeezed out, but they’re still on dealer lots. It’s still a comfortable car, but connectivity and some other features trail sedans that have gotten continuous investment and upgrades. Apple CarPlay and Android Auto are standard, for instance, but you can’t charge your device or access those features wirelessly.

The six-speed automatic transmission also is a relic compared with the 8-, 9- and 10-speeds the competition offers.

That doesn’t affect performance meaningfully, though. The EPA rates the 6 turbo I drove at 26 mpg in combined city and highway driving, the same as comparable models of the Accord, Camry and Malibu, 1 mpg less than the equivalent Sonata and K5.

The 6’s automatic shifts quickly and smoothly. Acceleration is competitive, as are steering and brakes.

While Mazda didn’t break the bank on updates, it has been diligent about keeping the 6’s driver-assistance and safety systems up to date. Standard features include adaptive cruise control, automatic front braking with pedestrian detection and collision alert, lane-departure alert and assist, blind-spot and cross-traffic alerts.

The 6 is a comfortable vehicle for long drives. Headroom is adequate and rear seat space gave another journalist nothing to complain about when he bummed a ride back to Detroit rather than waiting for the train.

It’s an accomplishment anytime a journalist doesn’t complain for four hours, let alone in the back seat of a midsize sedan, so score points for the 6.

I can’t say the same about Mazda’s infotainment system, which had me muttering under my breath before I’d gone a mile. It’s not outdated, like some other features. The problem is that Mazda loves a set of controls that I sorta loathe.

The 6 requires you to use a dial in the center console to control features including audio and navigation. This is true even when you’ve wired your phone in for access to CarPlay or Android Auto, both designed specifically to provide the same accessibility as a smartphone’s touchscreen. It’s a regrettable choice that makes it harder — and I found, more distracting — to accomplish many routine tasks.

Mazda is convinced its system is better, while other automakers once committed to multifunction dials have added touchscreens, tacit recognition that drivers want choice and that one size does not fit all.

SUVs fit more customers’ desire than sedans, though, so customers who want a midsize with Mazda’s signature virtues and quirks better act quickly. 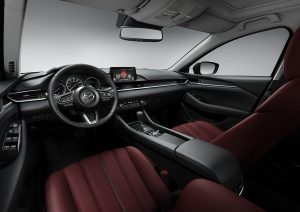 2021 Mazda 6 Signature Turbo at a Glance