AUTO REVIEW: Cadillac’s Sharp, Athletic CT5 Takes a Back Seat to No One 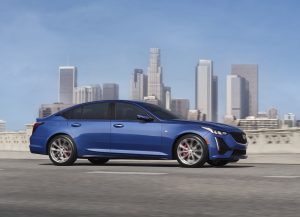 Cadillac has set itself on a bold course to go all-electric by the end of this decade. Call it the Yankee battle strategy as Cadillac follows California’s Tesla — the only U.S. automaker to best the German juggernaut of Mercedes/BMW/Audi on the luxury front.

But it’s not for lack of trying.

The 2021 Cadillac CT5 Premium Luxury sedan in my driveway is a gem. Pulling onto Telegraph Road in Pontiac, I toggled Drive Mode to SPORT and stomped the throttle with my size 15s. The 10-speed automatic transmission didn’t miss a beat, launching the 335-horse, twin-turbo V-6 through the gears with millisecond-quick shifts.

It’s one of the smoothest drivetrains in luxury autodom, and its surge of torque encouraged more misbehaving as I headed west and the lake-country roads became more twisted. Caddy essentially rebadged the last-generation CTS midsize sedan, then dropped it a segment to take on the compact Bimmer 3-series and Audi A6. So this is a big compact car — but the AWD system grips the road, transferring 405 pound feet of torque to the road without drama.

The buttery drivetrain is electric-like, but with more personality. The twin-turbo V-6 barked as it threw off shifts like machine-gun shells. Hard into a right-hander and the transmission rev-matched on downshift, the exhaust exhaling — HNUGGH! HNUGGH! It never gets old. 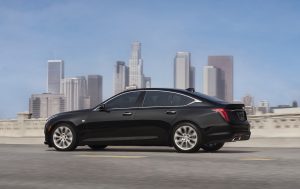 The CT5’s V-6 is a reminder of the badge’s huge performance bandwidth, which extends from the base twin-turbo inline-4, to the V-series I tested last year (with a healthy bump to 360 ponies) and the beastly 668-horsepower, V-8-powered CT5-V Black Wing. When you have the need for speed …

Otherwise, the CT5 is a sharp gentleman in a black suit. Once overly masculine with a full-fascia grille and blocky corners, Cadillac’s Art and Science design has matured. Its elegance is an interesting contrast to BMW’s recent evolution to a macho full-fascia front grille. CT-5 proportions are classic: long hood, wheels pushed to the front corners, coupe-like roof draped over big rear haunches.

The doors open with a squeeze of rubber pads on the inside of fixed handles — a properly firm handshake welcoming you to the club — and you are inside the roomiest cabin in class. With a basketballer’s 6’5″ frame, I fit more easily in this car — with front and rear legroom to spare — than in its European competitors.

A comparably equipped AWD BMW M340i will run you eight grand more. For the extra dough, Bimmer gives you more sophisticated all-digital instrumentation and dash design. But functionally, the 3-series and CT5 are similar. Their roomy consoles are anchored by monostable shifters and remote infotainment screen controls (the screen responds to touch as well, which is my preference). Goodies like head-up display and the V-series configurable drive modes are available. 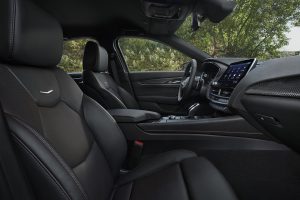 In a nod to Cadillac’s ambitious Tesla-like future of smartphone-like electronics, the CT5’s voice recognition system is excellent (superior to the Bimmer). The infotainment and climate controls are also easy to use. CUE (Cadillac User Experience) stumbled out of the blocks last decade — a friend traded in his Caddy for that reason alone — but the current system is a snap to use. Radio presets — one of my personal bugaboos — are intuitive, the screen interface displaying my choices in easy view.

I barked the names of restaurants as well as Michigan towns at the navigation system, and the Caddy responded obediently, like I was talking to my phone’s Google Assistant.

State-of-the-art, wireless Apple CarPlay and Android Auto and smartphone charging are on hand.

Curious, then, that Caddy does not make adaptive cruise control and self-park assist standard (a blind spot in other GM models, too). Even a Mazda 3 comes with standard ACC for under $30,000. Cadillac advertises a sci-fi future of Super Cruse and hands-free driving — yet forces you to pay an extra five grand for ACC that’s common in mainstream vehicles costing thousands less.

Perhaps that’s the advantage Tesla has over Caddy — as a startup, its brand purpose was comprehensive: a smartphone on wheels. Meanwhile, Cadillac had to co-exist with other brands (the gorgeous plug-in Caddy ELR was a Chevy Volt in a tux). Maybe the new-gen battery-powered Cadillac will be different.

But in the present, CT5 should be recognized as one of the best vehicles in its segment: engaging V-6 drivetrain, superior interior room, distinctive exterior design. All at a value price.

New EVs are coming, but the best gas-fired Caddys are here right now.