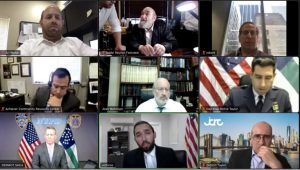 The NYPD’s Annual Pre-High Holy Day Briefing was held Tuesday via Zoom, with police officials promising extra security in Jewish neighborhoods during the holidays, despite no known threats to the community.

“We will be doing everything possible to protect your right to hold services and pray in peace,” said Police Commissioner Dermot Shea. “While there are no credible threats specific to New York City right now, we know that we must be vigilant.”

The traditional briefing, described by NYPD Chief Chaplain Rabbi Alvin Kass as “an annual checkup on the relationship between the Police Department and the leaders of New York’s Jewish community,” is typically the largest yearly get-together at One Police Plaza between police brass, politicians, and Jewish officials, activists and rabbis, usually over a bagel brunch. But due to COVID, the meeting was held over Zoom for the second consecutive year.

Harav Reuven Feinstein, shlita, mentioned the mishna in Avos that states that people should pray for the peace of government for were it not for fear of government, “man would eat his friend alive.”

“We consider each and every member of the New York City Police Department our protector of rights and safety,” said Rav Feinstein.

Many of the other speakers also expressed the Jewish community’s appreciation and support for the NYPD, especially as police feel under attack from reformers and leaders of other communities.

“So many people,” said community activist Rabbi Berish Freilich, “feel that the Police Department is not needed, and if it’s needed [there should be] a lot of new rules and a lot of new regulations. We in the Jewish community need you. We feel that without you it would have been nearly impossible to exist and walk to our synagogues and the kids to our schools. So we just want to let you know … we are all supporting you 100% and standing behind you.”

Despite some notable antisemitic incidents in New York City this year — particularly during the Israel-Hamas war in May — antisemitic crimes are down 15% from this point in 2019, a record-breaking year for crimes against Jews.

Tuesday’s meeting was held two weeks after community organizations and hundreds of volunteers joined with the NYPD to find Yosef Shapiro, a 7-year-old child who went missing in Canarsie Park. Chief Jeffrey Maddrey of the Community Affairs Bureau called it “an incredible show of community support,” and said there “could have been tragic results if it wasn’t for the collaboration and the partnership of the NYPD and the members of Hatzalah and Shomrim and just people from the community who came out to search for the young boy.”