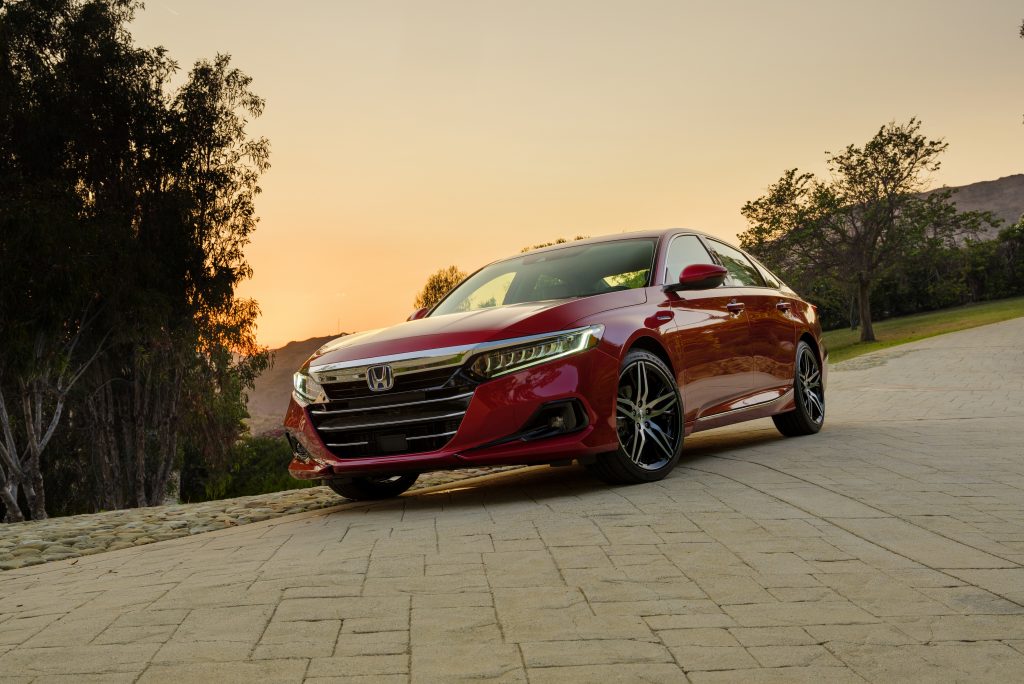 With the inexorable rise in gas prices, it remains to be seen if consumers’ love of SUVs will be impacted. In the meantime, it’s wise to remember what American founding father Thomas Paine said, “What we obtain too cheap, we esteem too lightly; it is dearness only that gives everything its value.”

So for a value equation, might I recommend the 2021 Honda Accord Hybrid, with an EPA rating of 48 mpg in both city and highway driving? Certainly, those are good numbers. So is this one: $27,565, its base price including destination charge. That’s nearly 33 percent less than the average price of a new car, which was $40,857 in January 2021 according to Kelley Blue Book.

And there are plenty of other reasons to consider this thrifty sled.

Consider the base Accord, with its 1.5-liter engine that generates 192 horsepower and 192 pound-feet of torque. In comparison, the Hybrid has an additional 20 horsepower, 40 pound-feet of torque and is one second quicker at reaching 60 mph. It’s also more fuel-efficient. Yes, the base Accord returns an EPA-rated 30 mpg city, 38 highway and 33 mpg combined, which is very commendable. But the Hybrid nets you an extra 18 mpg city, 10 mpg highway, and 15 mpg combined. Toss in the greater refinement from the Hybrid’s drivetrain and its additional standard equipment compared to the non-Hybrid models, and it’s a no-brainer, even though the Hybrid costs $1,800 more. Why? Add in the cost of fuel, and you’ll make up the difference in price in just a few years. After that, the Hybrid saves you money.

All of this comes with a couple of caveats. Firstly, these figures are for the base Hybrid, which runs on 17-inch wheels and returns 48 mpg in combined city/highway driving and costs $900 a year in fuel. The test model was a Touring, with 19-inch wheels, and rated at 43 mpg. This will cost more money in fuel. And thanks to the Hybrid’s driveline and battery pack, you won’t get a spare tire, merely a tire repair kit. But that’s no worse than many non-hybrid vehicles. Besides, when was the last time you had a flat tire?

Accords have always possessed a remarkable balance of a comfortable ride and sporty handling, one that few mainstream automakers seem to perfect. Road impacts are soaked up with aplomb but not at the expense of handling. The car does exhibit some body roll when cornering, but that’s to be expected given its ride/handling compromise. Overall, it possesses the same fun-to-drive character that Honda has imparted for decades, and the new model-year proves to be no different.

That said, the changes made to the Hybrid model bring a greater refinement and a far more natural feel. Powering off the line is fun, thanks to the electric motor’s generous torque and its instant throttle response. Better yet, you don’t feel the gas engine’s vibration when it comes on, adding an extra sense of grace.

Given that the Accord Hybrid Touring has a price closing in on $40,000, you’d expect the interior to have an upscale ambience, and you’d be correct. Its trim details are striking, from the white leather heated/ventilated front seat, and heated rear seats, to the head-up display and wireless Apple Car Play, which would have worked better if Honda’s infotainment system recognized my paired phone upon start-up. It never did. Each time the car started, it required that I manually go in and connect it. Honda’s infotainment systems continue to lag the industry in design and reliability, and this one is no different.

Still, it’s hard to resist the Accord Hybrid’s beautiful yet sensible design, impeccable balance of ride and handling, and a vehicle that delivers luxury-car equipment with economy-car fuel economy.