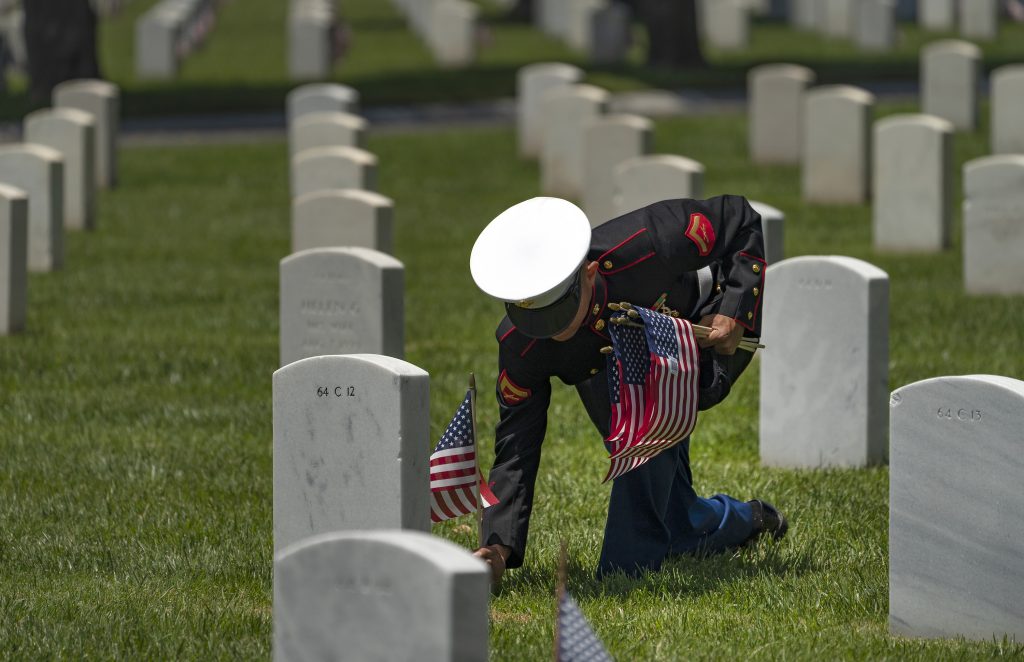 With midterm election season rapidly approaching, Republicans and Democrats have something in common when it comes to recruiting candidates they hope will deliver majorities in Congress: a preference for military veterans.

Both parties anticipate a significant number of races where veterans will be opposing each other, using their military service as a foundation of their appeal even as they hold widely diverging views on issues.

Democrats are clinging to threadbare advantages in both the House and Senate, so the success of these candidates could determine the balance of power.

The chaotic winding down of the U.S. war effort in Afghanistan — combined with President Joe Biden’s blaming his predecessor’s policies for much of what occurred — could resonate with voters in ways not seen since opposition to the Iraq War helped Democrats retake the House in 2006.

“When the U.S. suffers a very public defeat… historically, that’s the kind of thing that does become an issue in the next election,” said Aubrey Jewett, a political science professor at the University of Central Florida.

In few places are military matters more likely to dominate the debate than in Norfolk, Virginia, and the surrounding area. It’s a swing congressional district along the Atlantic coast and home to the world’s largest naval base. One in five residents are active military personnel, veterans or their relatives.

Rep. Elaine Luria, a Democrat, served as naval commander, including on aircraft carriers that once helped stage Afghanistan bombing runs. She defeated an incumbent Republican, Scott Taylor, a former Navy SEAL, in 2018 and again in a rematch in 2020.

Veteran candidates can be seen as more willing to put country above self, which often plays best among moderate voters and in swing districts without a dominant political ideology.

“One of the reasons you see veterans on veterans is because the thought process is that just neutralizes that advantage,” Taylor said. “Both parties are looking for that.”

This year, among those hoping to capture the Republican nomination and challenge Luria is another veteran, ex-Navy helicopter pilot Jen Kiggans, a state senator.

Luria, who sits on the House Armed Services, Homeland Security, and Veterans’ Affairs Committees, said that in her district, someone who has served “instantly goes into this with a level of credibility and connection.”

Kiggans believes that, too: “Understanding the nuances of military life and being a military family member, a military spouse, I think those are really all very important to representing the district well.”

The number of veterans who may face other veterans for congressional seats in 2022 won’t be known until after next summer’s primary season. In 2020, 17 House and Senate general election races featured two candidates’ having military experience, according to With Honor Action, a nonpartisan organization that promotes veterans for elective office.

During that 2018 cycle, Democrats stressed recruiting candidates with military experience to appeal to swing voters — and ultimately won House control.

Now candidates will be addressing issues such as the mob attack on the U.S. Capitol in January and the fractious evacuation of Kabul, the capital of Afghanistan, with their military backgrounds seen as giving them added credibility.

Roughly two-thirds of Americans said they did not think America’s longest war was worth fighting, according to a poll released this past week from The Associated Press-NORC Center for Public Affairs Research. While 52% approve of Biden on national security, the poll was conducted Aug. 12-16 as the two-decade war in Afghanistan ended with the Taliban returning to power and capturing the capital of Kabul.

Republicans nearly took control of the House in 2020, when all 15 seats they flipped featured women, minority or veteran candidates.

Oregon Democratic Rep. Peter DeFazio is his state’s longest-serving member of Congress and an Air Force Reserve veteran. He’s gearing up for a possible second consecutive race against Republican Alek Skarlatos, a former Army National Guardsman who, along with four others, stopped a gunman during a 2015 terrorist attack on a Paris-bound train.

The move into politics is not always smooth for veterans, considering that the military consistently polls as among the nation’s most-respected, most trusted institutions — and Congress decidedly does not.

Rye Barcott, a former Marine who is co-founder and CEO of With Honor, said his group advises veterans considering a run that “it is a hardship post.” He added: “It’s going to be painful but you’re doing it as a service to something larger than yourself.”

The number of female veterans running for Congress as major party nominees has increased even more sharply from 14 in 2018 to 28 vying for seats in the House or Senate last year.