AUTO REVIEW: 2022 Hyundai Tucson Is Ready for Its Time in the Sun 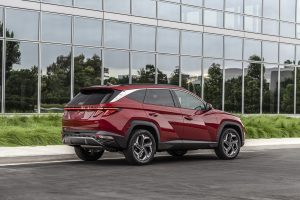 Anonymity, it seems,  is dead. In this era of social media we are all content creators, stars for 15 seconds, if only because no one has the patience anymore to sit through a whole 15 minutes.

Anonymity certainly is deadly if you’re in the business of selling cars. So it’s no surprise that the design imperative behind the redesigned 2022 Hyundai Tucson compact crossover SUV, its most popular U.S. model, was to give it some visual distinction.

“We decided it was time to wage a battle against boredom in this SUV segment,” said Christopher Chapman, senior designer at Hyundai Motors North America.

The new looks drape a Tucson that’s 6.1 inches longer riding on a 3.4-inch-longer wheelbase. It’s half an inch taller and wider, and holds an additional 7.7 cubic feet of stuff compared to the 2021 Tucson.

Its larger footprint is cloaked in an aggressive exterior that has a visually vocal grille texture that masterfully integrates the Tucson’s headlamps. On the side of the vehicle, uncompromising origami-like styling wraps into a more conventional rear, with taillamps that recall those of the Ford Mustang Mach-E.

But the Tucson’s most notable design flourish is the large metal garnish that starts at the side mirrors, wrapping atop the windows and growing in size as it flows rearward down the side windows. It’s meant to accent the rear wheels, according to Chapman. Overall, the Tucson stands out stylistically far more than its quieter predecessor.

Inside, the cabin’s design is a softer counterpoint to its exterior, with a look reminiscent of a luxury vehicle, albeit realized in mainstream materials. The instrument panel is anchored by a large 10.25-inch touchscreen, which is standard on the Limited. An 8-inch screen is standard on SE, SEL and N-Line models. The touchscreen’s sides are accented in metal trim that wraps with an Art Deco flourish as it arches up and across the dashboard. On the passenger side, this serves as a spot for engineers to stash small ambient air vents. Beneath the screen are the climate controls consisting of a flat, touch-sensitive panel. The instrument panel is notably absent of buttons and knobs, although this makes changing a radio station particularly hard if it’s not stored in your favorites. Thankfully, there are two USB ports in each row. 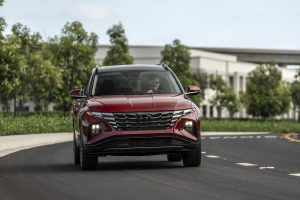 The new model’s cabin space is notably roomier than last year with comfortably firm seats with good side bolstering.

Most buyers will likely choose a Tucson powered by a 2.5-liter, direct-injected four-cylinder engine and 8-speed automatic transmission that develops 187 horsepower and 178 pound-feet of torque to the front wheels or all four, and returns combined fuel economy of 29 mpg with front-wheel drive and 26 mpg with all-wheel drive.

But the Tucson is also available as a Hybrid or Hybrid Blue powered by a 1.6-liter turbocharged gasoline engine producing an estimated 180 horsepower and 195 pound-feet of torque. The gas electric hybrid is mated to a 44.2 kW electric motor that together with gas engine produces 226 horsepower and 258 pound-feet of torque through a 6-speed automatic transmission. It’s 30 percent more fuel efficient than the standard gasoline engine and delivers 20 percent more torque. The Hybrid Blue plug-in hybrid uses the same gas engine and transmission but has a larger 66.9 kWh hybrid battery, providing for an all-electric driving range of 32 miles and estimated fuel economy of more than 70 MPGe when driving using purely electric power. Overall, the Hybrid returns an EPA-estimated combined fuel economy of 37 mpg, while the Hybrid Blue returns 38 mpg.

The gasoline-powered Tucson performs like any small crossover powered by a four-cylinder engine with front-wheel drive. Geared for fuel economy, not performance, the Tucson proves stingy with power unless you force the issue with your right foot. The transmission considers your request, eventually downshifting, allowing the engine to unleash its power with an artless howl. Using the shift paddles on the steering column reveals this engine’s true power, making it more interesting to drive. Overall fuel economy was 29.8 mpg.

This contrasts sharply with the hybrid, which exhibits a far more refined driving manner. Its electric motors provide lively acceleration off the line with a smooth, progressive power delivery. It’s also quieter than its conventional sibling. At higher speeds, it doesn’t feel as powerful, but it lacks the jerky driveline machinations of its trad sibling. 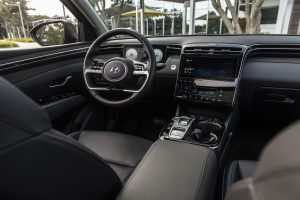 While the Tucson’s controls exhibit the same lightweight characteristics of many Asian cars, the brakes have a nice progressive feel, and the steering returns some degree of road feel. Body lean is modest while cornering; more abrupt maneuvers find the Tucson clearly communicating as it approaches its limits. The Tucson’s ride is firm, with most bumps and ripples clearly communicated, but without harshness. There’s a modicum of compliance, but not to the extent of a true off-roader.

This became apparent when my drive route found me driving the hybrid off-road on hills outside of Tucson. Given that Tucsons rarely see action outside of interstates, pokey parkways and mall parking lots, it lacks the typical gear you’d want for off-roading. However, it did have descent control, which along with all-wheel drive made this mall rat far more capable than you’d expect, although the firm ride turns incredibly harsh once the pavement ends. Kudos to Hyundai for proving that the Tucson can excel at soft-road duty; this is not its natural milieu. Interestingly, while it returned 42 mpg in careful urban driving, taking it off-road reduced that to 22 mpg.

It all makes for a far more memorable package than the Tucson it replaces. The 2022 Hyundai Tucson is ready for its moment of fame, no matter how long that lasts.