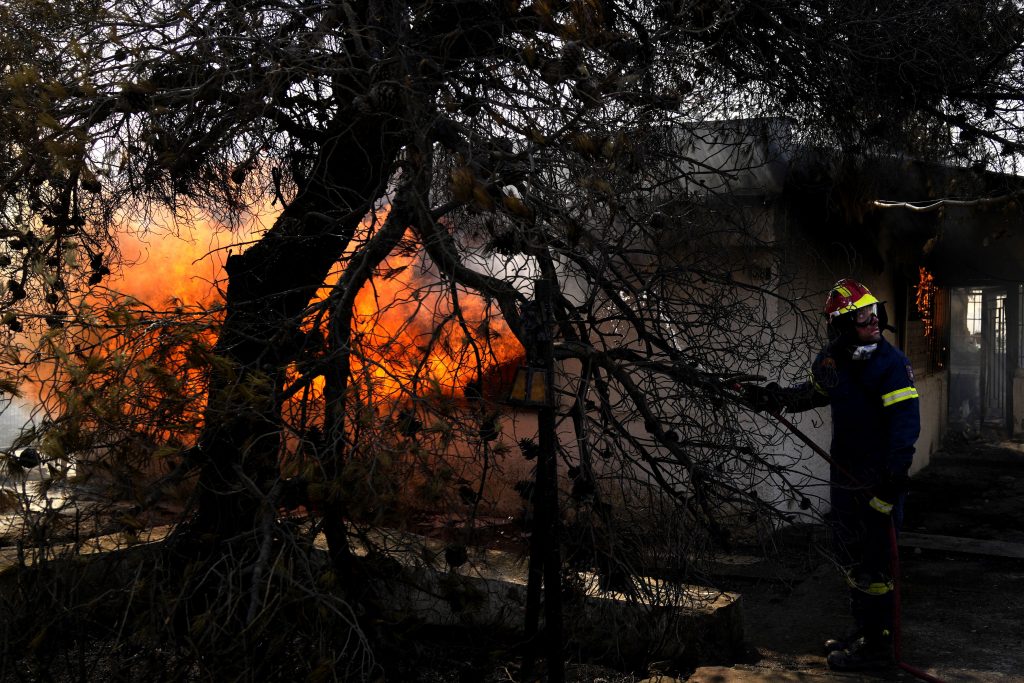 A major wildfire that has decimated a pine forest and burned homes northwest of the Greek capital appeared somewhat abated Friday, although hundreds of firefighters were still working to fully contain the blaze.

The fire near the village of Vilia, about 60 kilometers (40 miles) from Athens, broke out on Monday, one of hundreds of wildfires that have burned across Greece this month.

On Friday morning, 461 firefighters, including 143 from Poland, 166 vehicles, four water-dropping planes and four helicopters were fighting the blaze, the fire department said.

Citizens’ Protection Minister Michalis Chrisochoidis said on Thursday night that the “greatest part” of the fire had been contained, but the blaze was still not under control.

Firefighters had been facing particularly tough conditions, including lack of access roads into the dense forest, high temperatures, dry conditions and constantly changing winds, he said.

Greece’s wildfires come in the wake of the country’s worst heat wave in about three decades that left shrubland and forests parched. The causes of all fires have not been officially established, although more than a dozen people have been arrested on suspicion of arson.

The blazes have stretched Greece’s firefighting capabilities to the limit, leading the government to appeal for international help, including through a European Union emergency response system. About 24 European and Middle Eastern countries responded, sending planes, helicopters, vehicles and hundreds of firefighters.

On Thursday, Chrisochoidis said Romania had offered to send firefighters with vehicles once more, after the more than 100 who had been operating in Greece earlier this month returned home. Greece had accepted the offer “with gratitude,” the minister said. He did not specify how many Romanian firefighters would be involved or when they would be arriving.

Intense heat and wildfires have also struck other Mediterranean countries. Recent wildfires have killed at least 75 people in Algeria and 16 in Turkey, while in southern France 1,200 firefighters have been struggling to contain a major blaze that has forced thousands to flee, killed two people and injured 26. Worsening drought and heat have also fueled wildfires in the western United States and in Russia’s northern Siberia region.

Scientists say there is little doubt that climate change from the burning of coal, oil and natural gas is driving more extreme events.