The brash $35,000 Hyundai Veloster N hot hatch thinks it’s a premium performance car. Slip inside and it hands you your seat belt like a Mercedes S560 Coupe. The seats are bolstered for hard cornering, yet easy on the backside like an Audi RS. The steering wheel bristles with twin drive-mode buttons like a BMW M.

But my favorite luxe imitation is the “push-to-pass” button. You know, like a Porsche.

Porsche called this button “Sports Response.” Veloster, playful pocket rocket that it is, calls it “N Grin Shift.” Luffing along behind slower traffic on a rural, two-lane road south of Hell, Michigan, a dotted-line passing zone presented itself. I pressed NGS.

Instantly, the dual-clutch transmission skipped from 5th to 2nd gear. Revs pegged on the tachometer. The engine let out a blood-curdling scream. I stomped the accelerator and the Hyundai exploded past two cars in front of me.

Credit this sporty DNA to the South Korean brand’s German infatuation. Its N performance badge, after all, is short for Nürburgring, the world’s most famous, 73-turn race track where the Veloster spent its teething years. Its tutors were Albert Biermann and Thomas Schemera, ex-BMW M-brand engineers who know a thing or two about speed.

It all adds up to a terrific drivetrain package stuffed inside one of the quirkiest cars on the market. The Veloster is the buttoned-up Hyundai brand’s mutant, bulldog-faced, bandy-legged three-door compact hatchback. A rare breed, indeed.

While the standard Veloster comes with a 132-horsepower hamster wheel under the hood, gearheads can upgrade for a mere five grand to the Turbo R-Spec pumping out a rambunctious 201 horsepower. But the turbo-jacked 275-horse N takes on bigger prey. 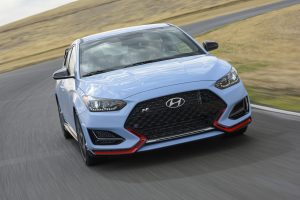 The Veloster N is most akin to the latter in racy performance and style.

That pace translates on road. As I flung the Veloster N around Livingston County’s twisted roads, the front-wheel-drive-driver felt surprisingly neutral. Hard left into a 90-degree left-hander and I could actually get the rear end to slide out, then hard on the throttle (contrary to a rear-wheel-driver) to pull the car straight.

No push. No torque steer. N-believable.

Credit sophisticated suspension dynamics and a standard electronic limited slip in this little hellion. The dynamics are similar to the superb Civic Type R but for three grand less, including the optional dual-clutch tranny.

I know, I know. Purists will protest that hot hatches are best with manuals (the Type R’s only offering) and I get it. Manual is standard on Veloster N, but for another $1,500, DCT offers undeniable benefits. Not just the aforementioned N Grin Shift, but also launch control that will rocket this hatchback to 60 mph in just 4.8 seconds, nearly half a second quicker than the stick. That’ll come in handy at the autocross track, which is where N owners should spend their weekends.

Autocrossers will also appreciate N’s macho looks — hungry maw, high rear spoiler. While not as outrageous as Type R (which, rumor has it, was penned by a 17-year-old comic book artist) and its Sopwith Camel tail, N stands out.

That swagger — along with the quirky three-door setup — will make the N less appealing to many buyers who’ll warm to Golf GTI/R or the Mazda3 Turbo. Indeed, for the same price as Veloster N, the Mazda offers all-wheel drive, four doors, electronics galore and a premium cabin.

The Veloster lags in interior amenities. The rear seats were pleasantly roomy for your giant, 6’5″ reviewer, but can only be easily accessed via the right-side rear door. The cabin is heavy in plastics and forgets adaptive cruise control (common in the compact class). On my long interstate drive to Hell, Michigan, the Hyundai oddly offered excellent lane-keep/drive-assist ability without corresponding adaptive cruise. Quirky, yes?

But for those looking for something different — and who crave constant driving stimulation (guilty as charged), the N is a treat. The premium-grade drivetrain offers multiple modes, screens and combinations to play with.

Notably, the Veloster can’t perform its tricks for long. Porsche’s $90,000 Cayman S, for example, will do launch control and Sports Response sprints all day long. Veloster N not so much.

After blowing by the line of traffic, I pushed the NSG button again for the next gaggle of cars. Veloster was N-ot interested. “N Grin Shift conditions not met” protested the instrument display. Launch control was even more problematic.

But the dual-clutch automatic’s snap, crackle n’ pop exhaust, quick upshifts and rev-matching downshifts never get old. And whether you’re on a long drive or pushing hard through the twisties, Hyundai’s cloth ‘n’ leather bolstered seats are outstanding. 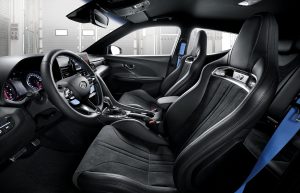