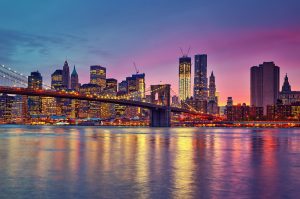 New York City, long the country’s largest metropolis, grew more populous over the past decade — adding 629,000 people to bring its population to more than 8.8 million, according to U.S. census data released Thursday, underscoring the demographic shifts that are further concentrating the country’s population in its largest urban areas.

Other surging large cities in the Sun Belt also gained ground and, despite the Big Apple’s growth, New York state overall did not keep pace with growth in some other big states because of continuing population declines upstate.

Los Angeles remained the nation’s second-largest city with nearly 3.9 million people. Phoenix, now the country’s fifth-most-populous city, grew the fastest among the largest U.S. cities over the past decade with an 11.2% surge in population, compared to the 7.7% increase in New York. Houston and Dallas also grew robustly.

“I think the magnitude of the increase was extremely impressive, and it bodes well for the growth and strength of New York,” said Steven Romalewski, the director of CUNY Mapping Service at the Center for Urban Research.

“This is what happens when you invest in pre-K for all, safe streets and working families,” the mayor added.

It was already known that New York state would lose a seat in Congress because some other states grew faster. New York would have kept all of its current 27 seats in Congress if just 89 more people had been counted in the state, according to a U.S. Census analyst.

The new data released by the U.S. Census Bureau will guide a 10-member reapportionment commission in its work to adjust the borders of the state’s congressional districts to account for population shifts.

The new figures offered the most detailed portrait yet of how the country has changed since 2010, and they could help determine control of the U.S. House in the 2022 elections. The data will also shape how $1.5 trillion in annual federal spending is distributed.

The state’s shifting population will no doubt be fodder for political calculations in the coming months as the redistricting commission drafts new boundaries not only for congressional districts but also for those in the state Assembly and Senate. The commission, established by voters through a 2014 ballot proposition, has until Sept. 15 to present a draft of its redistricting plan.

It remains to be seen how the commission will redraw congressional lines after the state loses a seat in Congress. Given New York City’s significant rise in population, it is almost certain that the state’s diminished representation in Congress will come at the expense of upstate New York.

The 629,000 additional people in New York City could mean that an additional upstate district shifts further toward the city.

With just 26 seats after the 2022 election, each district would have to represent about 777,000 residents.

The release of the data culled from the 2020 census is coming more than four months later than expected due to delays caused by the pandemic.

The numbers states use for redrawing congressional and legislative districts show where white, Asian, black and Hispanic communities grew or shrank over the past decade.

It also shows which areas have gotten older or younger and the number of people living in dorms, prisons and nursing homes. The data covers geographies as small as neighborhoods and as large as states. An earlier set of data released in April provided state population counts and showed that the U.S. had 331 million residents last year, a 7.4% increase from 2010.

The census data released in April counted 20.2 million people living in New York last year, up from just under 19.4 million a decade earlier. New York is now the fourth-most-populous state, behind California, Texas and Florida, which passed the Empire State.