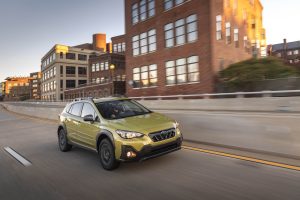 Several decades ago, in a last-ditch effort to sell its aging lineup of cars, American Motors hiked the ride height three inches of the Concord and Spirit, equipped them with all-wheel drive and renamed them Eagles. They were unique, coming at a time when most cars were still rear-wheel drive. But they did little to save AMC from merging with Renault and ultimately being absorbed by Chrysler.

But their — ahem — spirit lives on in the Subaru Crosstrek, which is little more than the less-expensive Impreza hatchback given a lift and clad in truck-like trim. The Crosstrek’s price rises along with its ride height, starting some $3,450 more than its identical sibling. From a value standpoint, it’s hard to see the Crosstrek’s advantage, other than extra ground clearance. And yet, inexplicably, Crosstrek sales in 2020 were roughly double those of the Impreza, despite the higher price.

The Crosstrek returns for 2021 in Base, Premium and Limited trims, along with a newly added Sport trim. All models receive lightly revised styling and a suspension that’s been retuned for improved ride quality, better handling and more responsive steering. Subaru also added a humidity sensor to its automatic climate-control system, a welcome addition to those of us in humid climes. 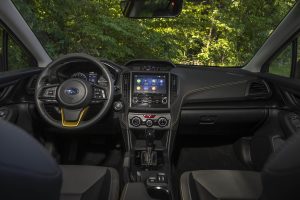 The biggest difference among Crosstrek models is power: Base and Premium trims have a 152-horsepower dual-overhead-cam 2.0-liter horizontally opposed four-cylinder engine; Limited and Sport models get a more powerful 182-horsepower DOHC 2.5-liter flat four from the larger Legacy sedan and Outback wagon. A six-speed manual is standard on Base and Premium Crosstrek models; a continuously variable automatic transmission is standard on Limited and Sport models, and optional on others. Fuel economy is best with the base engine and automatic transmission, at 30 mpg in combined EPA city/highway driving, although the larger engine still rates well, coming in at 29 mpg. The manual, in contrast, merits a mere 25 mpg. A plug-in Hybrid is also offered, and rated at 35 mpg, and comes with a 17-mile electric-only range.

The larger engine endows the Crosstrek with enough power so that you won’t be banished to the right lane of the interstate. Getting up to speed is noticeably quicker than it is with the base engine, although requesting more power once at speed calls for planning, as it takes longer than it should. The test car came with Sport and Intelligent drive modes, the latter smoothing out its demeanor and making things less interesting than they already are. The transmission does its best to imitate a traditional automatic, and succeeds for the most part. Handling is typical of a small car, with a suspension that adequately soaks up some bumps and pounds over others, followed by some rebounding. Body lean is noticeable, but well controlled. Cornering is impressive, however. The Crosstrek’s torque vectoring and all-wheel drive seems to banish understeer, which was unexpected given its other traits, such as its light steering feel. Braking was equally impressive, but the brake pedal feels lifeless. Road and engine noise were prominent, although that’s not unusual given its class.

Overall, the Crosstrek’s performance is better than the average small car, but it isn’t necessarily an engaging vehicle to drive despite its newfound power. There’s little fun to be found; this car is all about sensible utility. 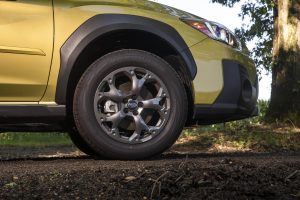 That’s certainly true of cabin ambience, which can best be described as functional. You can’t hide this Subaru’s economy car roots. The interior is trimmed with shiny, smooth black plastic and fake carbon fiber trim that will fool no one and cheapens this car’s look even further. While the contrasting yellow stitching is a nice touch, Subaru only uses it in the front row. They couldn’t afford a couple more feet in the rear? This makes the second row feels like second class, with a stark ambience that lacks such niceties as a folding center armrest or vents on the center console. And there’s only one seatback map pocket, not two.

But there’s an impressive amount of head and legroom both front and rear, and adequate storage space in the cargo hold, although liftover is very high and the space does not go far forward. Thankfully, the rear seats fold. Long-haul front seat comfort isn’t great, but it’s more than sufficient on shorter treks.

The Crosstrek Sport’s tech package includes an 8.0-inch touchscreen, built-in navigation, and an eight-speaker Harman Kardon audio system. It’s a noticeable improvement from the base model’s 6.5-inch touchscreen. That said, the radio features the cheapest tuning knobs ever fitted to an automobile. Totally lacking in weight or heft when you turn them, they feel as delicate as crepe paper, and are sure to break. Bluetooth, and Apple CarPlay and Android Auto are standard.

Certainly the Crosstrek offers what any Subaru devotee would expect: a purposefully utilitarian vehicle with a few added frills, delivered in a fairly plain package. There’s nothing flashy here, just what you need to get the job done in an economical manner. Its fashion is its utter lack of it.