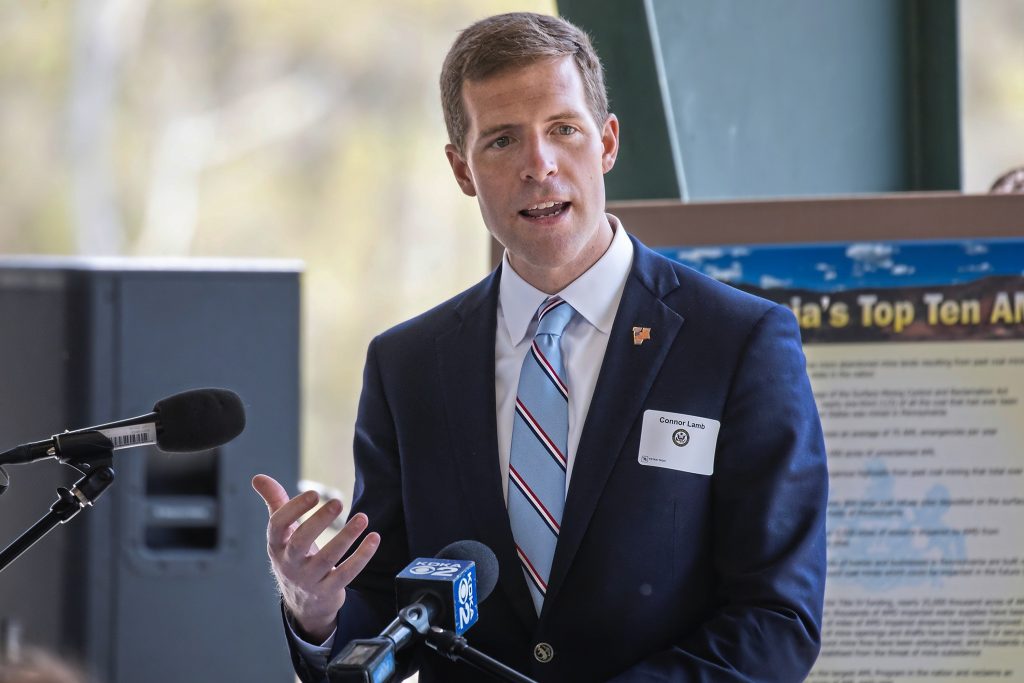 Lamb is seeking the nomination to replace outgoing GOP U.S. Sen. Pat Toomey. Lamb, a former Marine and federal prosecutor, rose to political prominence three years ago when he beat a Donald Trump-backed Republican in a special election that foreshadowed the 2018 Democratic takeover of the House.

The Senate race is wide open on both sides and is expected to be among the most expensive in a 2022 U.S. midterm election that will decide party control of an evenly split Senate. Toomey is retiring after two terms.
Lamb launched his campaign Friday afternoon at a union hall in Pittsburgh, making a heavy economic pitch to working and middle class voters while slamming Republicans who tried to overturn the last presidential election.

“If they will take such a big lie and place it at the center of their party, you cannot expect them to tell the truth about anything else. They lie about the election and they lie about your paycheck, too, and your health care,” he said.

Lamb has to make it through a tough Democratic primary if he hopes to tangle with the eventual Republican nominee next year.

He faces a diverse lineup of Democratic candidates. They include the state’s lieutenant governor, John Fetterman, who also hails from western Pennsylvania and has a high media profile; Philadelphia state House Rep. Malcolm Kenyatta, who made history as the first Black man to be elected to the state General Assembly; and anesthesiologist Val Arkoosh, a woman who chairs the board of commissioners in Montgomery County outside Philadelphia, the state’s third-most populous county.

Lamb, a veteran of three congressional campaigns in as many years, argued he has shown the ability to win on tough political terrain.

“As Democrats, we fight for every single vote across our state, on every single square inch of ground. We do not give up on anyone and we leave no one behind.” he said Thursday. “That’s what I learned in … some pretty tough territory for most Democrats.”

Lamb, who represents a district in the Pittsburgh suburbs, has walked something of a tightrope between the party’s centrist and progressive wings.

He’s in favor of eliminating the Senate’s filibuster rule, as progressives want and moderate Democrats like Sens. Joe Manchin of West Virginia and Kyrsten Sinema of Arizona have opposed.

But he has taken middle-of-the-road positions on guns and has pushed back on calls to “defund the police” and to ban fracking, the oil and gas extraction technique that environmentalists blame for polluting water. His congressional district is located in the nation’s most prolific natural gas reservoir.

Lamb has urged Democrats to broaden their appeal to white, working class voters in once solidly Democratic areas who went for Trump in a big way in Pennsylvania and elsewhere.

It’s unclear how that pitch, or Lamb’s more moderate positions, will resonate in a Democratic primary in a state where urbanites and swing voters in the fast-growing suburbs propelled Joe Biden to statewide victory last November.

Lamb is relatively well-funded, reporting $1.8 million in his campaign account as of June 30, trailing Fetterman but ahead of everyone else in the race.

Also running on the Democratic side are John McGuigan, a software executive; Dr. Kevin Baumlin, the chair of emergency medicine at Pennsylvania Hospital; and Eric Orts, a climate change activist and professor at the University of Pennsylvania’s Wharton School. Meanwhile, Philadelphia state Sen. Sharif Street, the son of former Mayor John Street, has said he is considering running.

There is an equally long list of GOP candidates for the seat, some with ties to Trump.

They include conservative commentator Kathy Barnette, running to become the first Black Republican woman in the Senate; Jeff Bartos, a real estate investor who was the party’s nominee for lieutenant governor in 2018; Carla Sands, Trump’s former ambassador to Denmark; and Sean Parnell, a friend of Donald Trump Jr. who launched a career as an author after writing a memoir of his tour of duty as an Army Ranger in Afghanistan.

Parnell unsuccessfully challenged Lamb in last year’s close election for Lamb’s House seat, raising the prospect that the two men could once again face each other on a bigger stage.

Pennsylvania’s primary is May 17.