Seven Democratic Senators have written a letter on behalf of two-year-old Alta Fixsler to UK Ambassador to the U.S. Karen Pierce.

The U.K. Supreme Court and European Court of Human Rights have declined to take up the Fixsler family’s appeal. Alta suffered a severe brain injury at birth and is unable to breathe or eat on her own. The Manchester University NHS Foundation Trust, which is responsible for her care, says there is no potential for her condition ever to improve, that there is no medical benefit to continuing her life support, that she is suffering pain and it would be humane to remove her from life support. The courts have sided with the hospital against her family and refuse to allow her family to let her leave. Facilities in the U.S. and Israel both have offered to take her in, and community organizations have offered to transport her at no cost to the UK.

The senators wrote, “In light of the long, productive, and mutually rewarding US-UK alliance, we make this urgent and time sensitive plea to allow the daughter of an American citizen to travel to the U.S. on the visa that was secured for her to seek medical care. This is a matter of life and death and again we urge you to work with us to facilitate the travel of Alta Fixsler from the UK to the United States, where care for her is waiting.”

Chuck Schumer and Kristen Gillibrand of New York, Corey Booker and Robert Menendez of New Jersey, Richard Blumenthal of Connecticut, Thomas Carper of Delaware, and Tammy Ducksworth of Illinois all signed the letter. Ten Republican Senators signed their own letter on behalf of the Fixsler family in June.

Schumer, who has been heavily involved in securing a visa for Alta, personally called the ambassador to discuss the urgent matter.

With legal options seemingly exhausted, it appears the Fixsler family’s only means of saving the girl’s life is through political pressure. 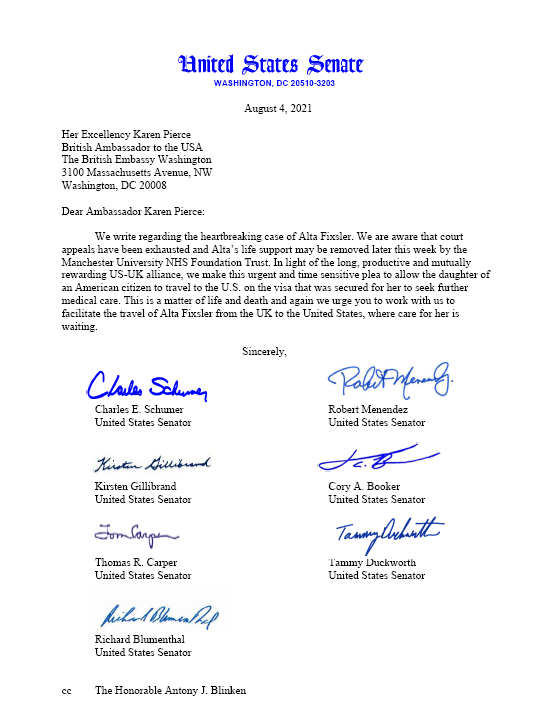