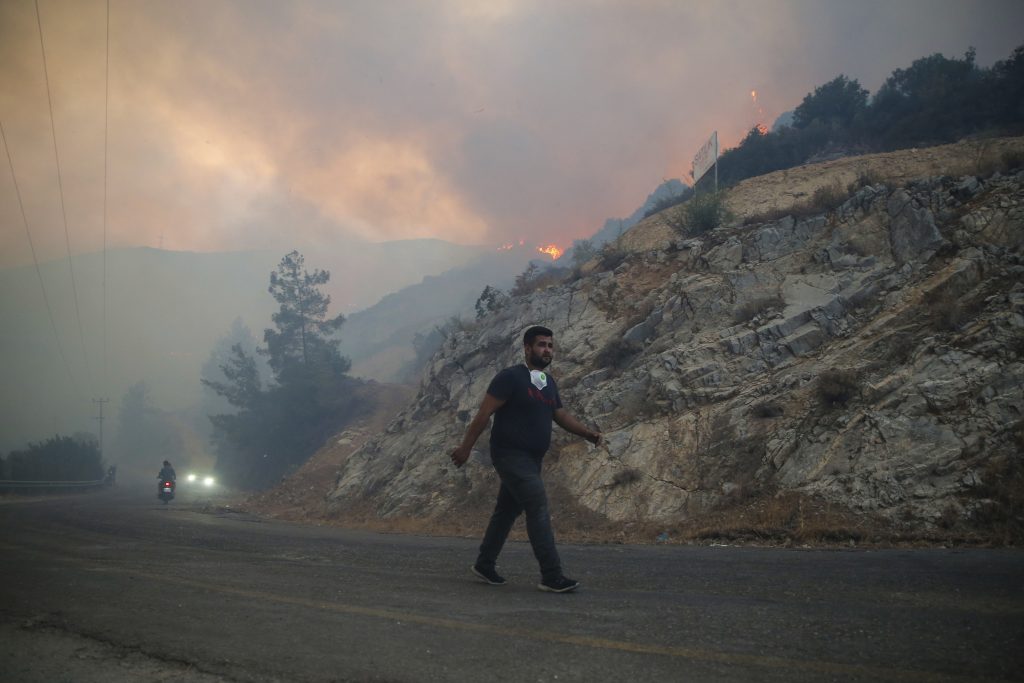 Wildfires burned for a seventh day in Turkey’s Mediterranean region Wedneday, prompting the evacuation of at least one more neighborhood.

Scorching heat, low humidity and strong winds have fed the fires, which so far have killed eight people and countless animals and destroyed forests. Villagers have had to evacuate their homes and livestock, while tourists have fled in boats and cars.

Observers worry that fires in the seaside province of Mugla could jump to two thermal power plants. Flames came within a kilometer of the Kemerkoy thermal power in the district of Milas late Tuesday before the wind changed direction, helping avert a crisis there for the moment.

Firefighters and police water cannons, usually used during political protests, fought back the flames at night as other rescue officials dug ditches around the plant, according to reporters at the scene. Milas Mayor Muhammet Tokat said Wednesday that the fire was under partial control and efforts to put out the flames in the thermal plant area continued. Tokat added that the much needed air support had finally arrived. He said he hoped their assistance would continue throughout the day to bring the fire under full control.

Videos from an adjacent neighborhood in Milas showed charred, decimated trees while firefighters continued dousing the area with water hoping to prevent another spark from reigniting the fire.

The defense ministry said it had sent two ships to the area to be used for sea evacuations, if needed.

Fires continued on in six locations in Mugla, local forestry officials said. Another neighborhood in Antalya province was evacuated as of Wednesday morning.

Turkish President Recep Tayyip Erdogan’s government is under criticism for its inability to put down the fires but the minister of agriculture and forestry, Bekir Pakdemirli tweeted that 160 fires in 34 provinces had been brought under control as 14 continued in five provinces.

Thousands of firefighters and civilians are trying to douse the flames. Turkey’s foreign minister, Mevlut Cavusoglu, said late Tuesday that Turkey had hired four new helicopters that would be able to firefight after dark. They would be arriving from Ukraine. Planes sent from Spain and Croatia joined aircraft from Russia, Iran, Ukraine and Azerbaijan on Tuesday.

Authorities have launched investigations into the cause of the fires, including possible sabotage by Kurdish militants. Experts, however, mostly point to climate change as the culprit, along with accidents caused by people.

A heat wave across southern Europe, fed by hot air from North Africa, has led to wildfires across the Mediterranean, including in Italy and Greece. Temperatures in Marmaris, in Mugla, reached an all-time high of 45.5 C (114 F) on Tuesday.

The Turkish meteorology authority warned that temperatures would rise between 4 and 8 degrees Celsius above seasonal norms around the country’s Aegean and Mediterranean coasts.

Across the sea, in neighboring Greece, firefighting planes resumed operations at first light to tackle a major forest fire on the northern outskirts of Athens that forced thousands to flee their homes the previous day amid the country’s worst heat wave in decades.

The fire in two suburbs of the Greek capital was the worst of 81 wildfires that broke out around the country in 24 hours from late Monday to late Tuesday. There were no reports of deaths or serious injuries. The fire burned homes, businesses and vehicles, and sent a large cloud of smoke over Athens on Tuesday night.

Two more major forest fires were still burning on the Greek island of Evia and one in the southwestern Peloponnese.

The heatwave is forecast to continue in Turkey and Greece until the end of the week.