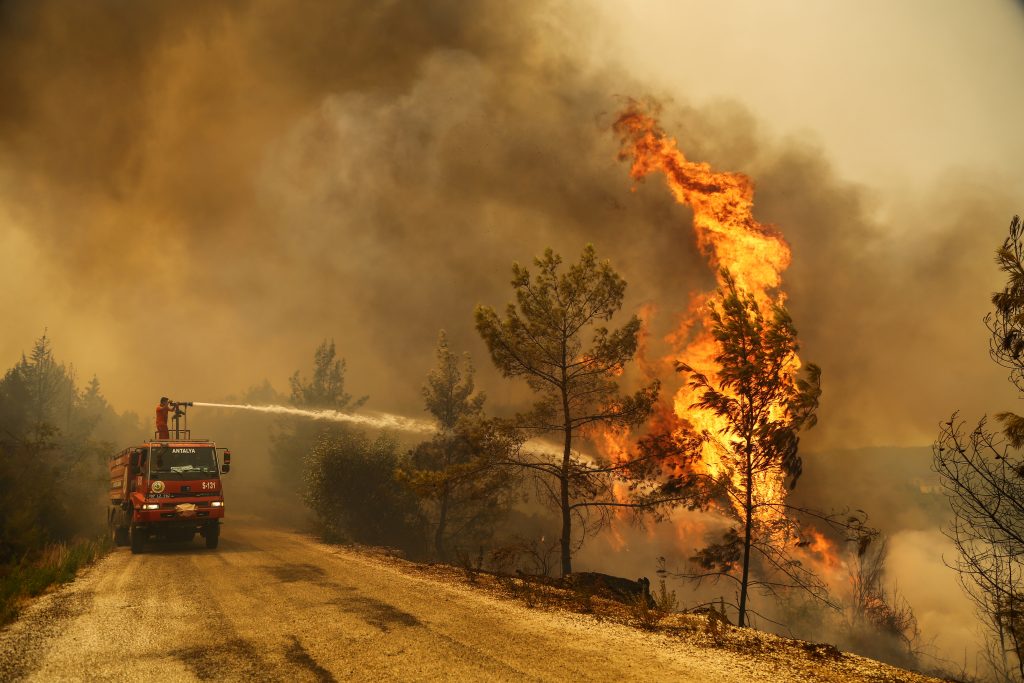 Days after a raging wildfire in southern Turkey drove his family from the home they lived in for four decades, Mehmet Demir returned on Saturday to discover a burnt-out building, charred belongings and ashes.

Bedsprings, a ladder, metal chairs and some kitchenware were the only things left identifiable after some of the worst fires in years tore through the region, with several still burning four days after they erupted on Wednesday.

Demir’s home, near the coastal Mediterranean town of Manavgat and not far from the popular tourist resort Antalya, was hit by one of the some 100 fires that officials say broke out this week across southern and western Turkey. Sweltering heat and strong winds fanned the flames.

“The blaze spread through the highlands and raged suddenly,” Demir told Reuters as he looked around the wreckage of his home, built in 1982. “We had to flee to the centre of Manavgat. Then we came back to find the house like this.”

“This was our (only) saving for the past 39-40 years. We are now left with the clothes we are wearing, me and my wife. There is nothing to do. This is when words fail.”

The death toll from the fires rose to six on Saturday, as two firefighters died during efforts to control the fire in Manavgat, officials said. Thousands of people were evacuated from their homes.

Smoke from the fires in Antalya and Mersin extended to the island of Cyprus, around 150 km (100 miles) away, satellite imagery showed.

A new blaze erupted on Saturday in the popular holiday resort of Bodrum on the Aegean coast and some residential areas and hotels were evacuated, according to broadcasters.

Video footage showed plumes of smoke rising from mountains above Bodrum and a helicopter discharging water as firefighters tried to control the blaze before it reaches residential areas.

Wildfires are common in southern Turkey in the summer but authorities say the latest blazes have covered a much bigger area.

Agriculture and Forestry Minister Bekir Pakdemirli said a total of 101 fires had broken out in the past four days, of which 91 were under control.

Turkish meteorological authorities said forecasts pointed to heatwaves along the Aegean and Mediterranean coastal regions. Temperatures are forecast to reach 43 Celsius to 47 Celsius (109.4 – 116.6 Fahrenheit) in Antalya next week.

President Tayyip Erdogan said during a visit to Manavgat on Saturday all damaged houses would be rebuilt and losses compensated, adding that Azerbaijan, Russia, Ukraine and Iran have sent firefighting planes and support teams to the affected areas.

In neighboring Greece, authorities warned the public against unnecessary work and travel on Friday as temperatures hit 40 C (104 F) in Athens.

On the Italian island of Sicily, firemen said on Saturday they were battling for a second straight day wildfires that reached the town of Catania, forcing people to leave their homes and the local airport to temporarily shut down.