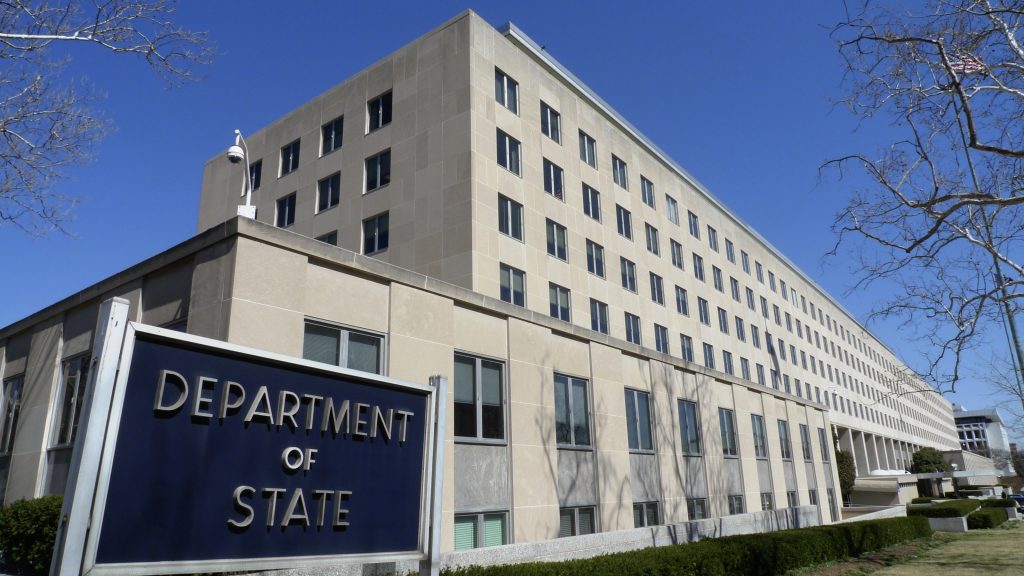 The perpetrator of the swastika etched onto a wood panel of Elevator 36 at the U. S. State Department in Washington may have garnered more attention than he or she had hoped for. The odious symbol was obviously intended for the eyes of American diplomats, especially Jewish ones, in the corridors of “Main State,” as it’s known. But that it would instantly go viral and be reported on in news media around the world was perhaps beyond expectations.

The first to break the story was Axios, which attributed it to a “person familiar with the discovery.” In other words, somebody rushed to tell the world, acting on the axiom that bad news travels fast.

Even people who know little about the Holocaust (an astonishingly high number, according to polls) know that the swastika is universally recognized as the symbol of Adolf Hitler’s Nazi party that ruled Germany and brought the Holocaust and World War II upon the world.

The location of the graffiti was certainly eye-catching, as it was found in close proximity to the office of the yet-to-be-nominated ambassador-at-large to monitor and combat antisemitism. An overtly Jewish office was sought out in the otherwise nonsectarian State Department.

However, the address of the hateful message might have unintended consequences. Responding to complaints that the post has gone vacant, the administration just this month promised Jewish groups that the situation will soon be remedied. The swastika underlines the need to make the appointment urgently.

The first task of the antisemitism ambassador might well be to investigate antisemitism within the State Department itself. In the meantime, Blinken said that an investigation will be conducted to identify and punish the culprit.

That raises the question about security at Main State. Only persons with a security clearance are permitted to enter, and any investigation should seek to determine whether there was a failure in the system, or whether the perpetrator had clearance, either as a federal employee or an outsider with credentials. Either way, it’s cause for concern.

We welcome the response of the most senior American officials. President Biden tweeted: “Let me be clear: Anti-Semitism has no place in the State Department, in my Administration, or anywhere in the world. It’s up to all of us to give hate no safe harbor and stand up to bigotry wherever we find it.”

Secretary of State Antony Blinken, from an official trip abroad, wrote in a message to Department employees: “As this painfully reminds us, anti-Semitism isn’t a relic of the past. It’s still a force in the world, including close to home. And it’s abhorrent,” wrote Blinken. “It has no place in the United States, at the State Department or anywhere else. And we must be relentless in standing up and rejecting it.”

Within the State Department, the incident was a leading topic of discussion on Tuesday, and text messages were going back and forth. “Some expressed concern that people with antisemitic beliefs may be in the ranks of diplomats who work to combat hate around the world,” reported BuzzFeed News. (That item found its way into Xinhua, China’s official state-run press agency, always on the lookout for evidence of racism and antisemitism in the U.S. to fling in the face of American diplomats chiding Beijing’s human rights abuses.)

In any case, it undeniably caused a shudder to run through the Jewish community and beyond. The feeling is that this is different from other cases of antisemitism. It’s horrifying to think that an employee of the State Department, or even an outsider with security clearance, could have done this. It suggests that even the most respectable and powerful institutions in America are not impervious to antisemitism.

Of course, in perspective, it’s minor compared to countless other outrages against the Jewish community, including physical violence and terrorism, which we have seen so much of in the past few years.

But the particular unease comes not only from the location of the incident, but the timing. For these are days when the Democratic party and its Jewish adherents have shifted to the left, and the increasing criticism of Israel, sometimes laced with antisemitic tropes, has raised fears of what is to come.

Thus, there is reason to harbor suspicion that antisemitism has indeed surfaced in the State Department, and it is fair to assume that other agencies of the government are not immune either.

All must be done within the law and proper channels to fight this scourge. But ultimately, we look to Ha Kadosh Baruch Hu to answer our tefillos for Moshiach and an end to evil in the world.