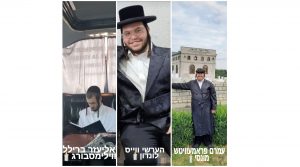 Four people, including three young Jewish men, were killed Wednesday in Prykarpattia, western Ukraine, when the small plane they were in crashed directly into the roof of a private home.

The victims have been identified as Amrom Fromowitz a”h, Hershy Weiss a”h, and Eliezer Brill a”h.

Fromowitz was from Monsey, Weiss was from Golders Green, and Brill was from Williamsburg.

Firefighters rushed to the scene to put out the blaze sparked by the crash and rescue people from the flames, the Express reported.

The State Emergency Service of Ukraine said in a statement: “On July 28, at about 1:40 p.m., a light-powered sports plane crashed into a private house near the village of Sheparivtsi, Kolomyia district, with subsequent burning, killing four people.”

The three were part of a larger group of around fifty bochurim on a Lalechet tour of Jewish historical sites. They were spending the afternoon on a sightseeing plane. Several of the bochurim had already been flown on the plane and more were waiting for their turn when it crashed. Authorities kept them at the scene of the crash as part of the investigation.

Yanky Meyer from Misaskim told Hamodia that he was alerted to the tragedy around 8:10 a.m. His organization sent people to the homes of the parents and grandparents of the victims, as well as to the summer camps of the victims’ siblings.

One of the victims was a chosson, he said. “We notified the kallah’s family.”

It is not yet known why the plane crashed.