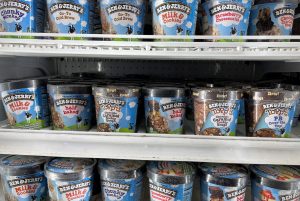 Florida Governor Ron DeSantis has urged the state to action against Ben & Jerry’s and parent company Unilever for the ice cream brand’s decision to no longer sell its products in Judea and Samaria.

“These actions affirm the State of Florida’s relationship with the State of Israel and our commitment to a swift response to those who discriminate against the Israeli people,” he said.

DeSantis sent a letter to the State Board of Administration of Florida, urging them to place Ben & Jerry’s and Unilever on the board’s Continued Examination Companies that Boycott Israel List, according to the Hill.

Florida holds investments in Unilever, which is a publicly-traded company.

“As a matter of law and principle, the State of Florida does not tolerate discrimination against the State of Israel or the Israeli people, including boycotts and divestments targeting Israel,” DeSantis said.

He added that if the companies do not “cease the boycott of Israel as required by Florida law” after being placed on its Scrutinized Companies List, the agency “must refrain from acquiring any and all Unilever assets consistent with the law.”

Ben & Jerry’s have been facing political and public backlash since it announced on July 19 that “it is inconsistent with our values for Ben & Jerry’s ice cream to be sold in the Occupied Palestinian Territory (OPT).”

Texas Gov. Greg Abbott called the company’s decision “disgraceful” and said the state is considering options for  sanctions against the ice cream brand.

“I can say I will not be eating any more Cherry Garcia for a while,” Mayor Bill de Blasio said at his press conference on July 20, referencing a Ben & Jerry’s ice cream flavor, in response to a question by a Hamodia reporter. “BDS is a movement that will undermine peace in the Middle East. It’s as simple as that. You cannot have peace if you undermine the economic reality and create division. I just believe that’s absolutely the wrong approach and I don’t think Ben and Jerry’s should be doing that.

The backlash against Ben & Jerry’s extended beyond kosher stores: Morton Williams, a chain of 16 supermarkets in the New York City Metropolitan area, is severely cutting back its sales and marketing of the brand, Morton Williams co-owner Avi Kaner announced, tweeting, “Our supermarkets have taken action against Ben & Jerry’s, which is boycotting Jewish communities that are at the center of a territorial dispute in Israel, including the Jewish Quarter of Jerusalem – inhabited by Jews for over 3,000 years.”