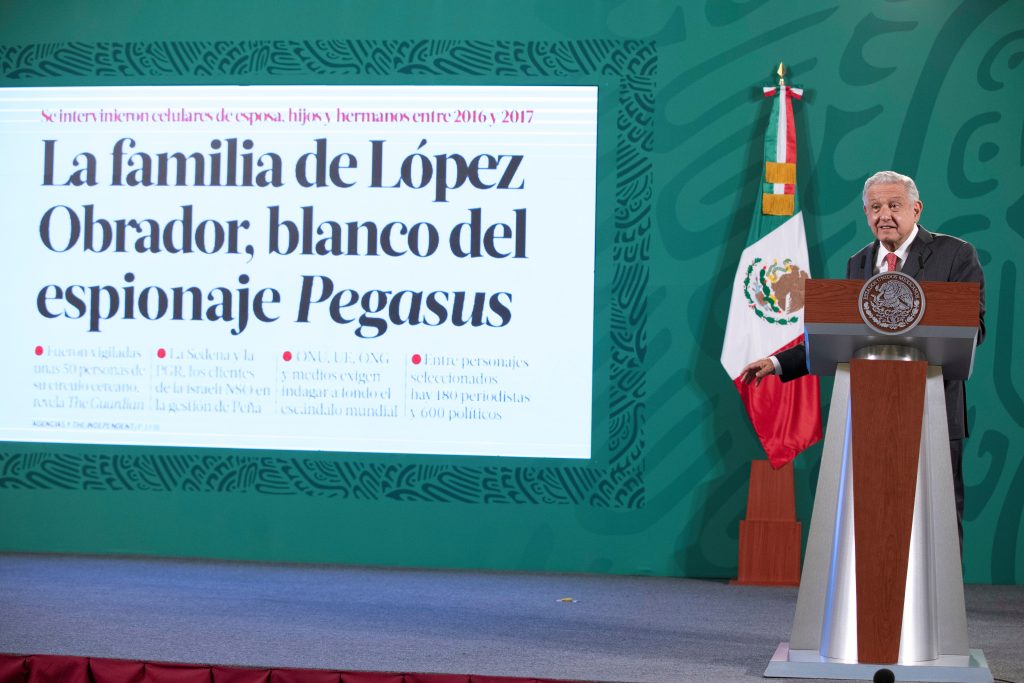 Israel will launch an inquiry into claims that private Israeli firm NSO Group’s “Pegasus” spyware was used by governments across the globe to spy on political rivals, journalists and human rights activists.

The inquiry team is expected to include representatives from the Defense Ministry, National Security Council, Mossad, other agencies and legal experts. Its goal will be to determine whether NSO Group acted in contravention of the defense export permit it received from the Defense Ministry’s Defense Exports Control Agency (DECA), and whether its products were used by various clients in contravention of the conditions of the permit.

The decision to launch the inquiry came on the heels of an investigation by 17 media organizations into NSO’s spyware published on Sunday on how it was being used to target prominent individuals.

The cell phones of French President Emmanuel Macron and 15 members of the French government may have been among potential targets in 2019 of the surveillance spyware, according to French newspaper Le Monde.

An official in Macron’s office said authorities would investigate Le Monde’s report, and if the targeting is proven, it would be “extremely grave.”

Le Monde quoted NSO as saying the French President was never targeted by its clients.

Fifty people close to Mexico’s President, Andres Manuel Lopez Obrador, were also on the potential target list. They include his wife, children, aides and cardiologist. Lopez Obrador was in opposition at the time. A Mexican reporter whose phone number was added to the list in that time period, Cecilio Pineda, was assassinated in 2017.

After Mexico, the largest share of potential targets was located in the Middle East, where Saudi Arabia is reported to be among NSO clients. Also on the list were numbers in Bahrain, the United Arab Emirates, India, Hungary, Azerbaijan, Kazakhstan and Pakistan, Morocco and Rwanda.

Radio France reported on Tuesday that Moroccan King Mohammed VI’s phone was on a list of numbers of people identified as potential Pegasus spyware targets by Morocco’s intelligence services.

Jean Asselborn, the foreign minister of Luxembourg, said Tuesday NSO Group was present in Luxembourg via its subsidiaries, and that he would be writing a letter to the directors of those Luxembourg units of NSO to remind them of the importance of protecting human rights.

NSO denies ever maintaining a list of “potential, past or existing targets.” It claims to sell only to “vetted government agencies” for use against terrorists and major criminals.

Israel’s Defense Ministry said in a statement that it “approves the export of cyber products exclusively to governmental entities, for lawful use, and only for the purpose of preventing and investigating crime and counterterrorism.” It said national security and strategic considerations are taken into account.

United Nations human rights chief Michelle Bachelet on Monday said the apparent widespread use of the Pegasus spyware to illegally undermine the rights of those under surveillance, including journalists and politicians, was “extremely alarming” and confirmed “some of the worst fears” surrounding the potential misuse of such technology.”

The recent reports have caused considerable embarrassment within Israel’s diplomatic-security echelon. NSO operates from Israel and its products are exported under DECA’s oversight. Moreover, official Israeli representatives have helped the company sell its products in several countries with which Israel doesn’t have official diplomatic relations. The purpose of these efforts, allegedly, was to help these countries fight terrorist groups, and pave the path for the sale of additional Israeli products. The New York Times reported earlier this week that such help was provided in Saudi Arabia, among other countries.

“We are aware of recent publications regarding the use of systems developed in certain Israeli cyber companies,” said Gantz in a speech to Cyber Week at Tel Aviv University, without mentioning NSO Group by name. “Israel, as a liberal Western democracy, controls exports of cyber products in accordance with its defense export control law, complying with international export control regimes.”

Gantz added that “as a matter of policy, the State of Israel authorizes the export of cyber products solely to governments, only for lawful use, and exclusively for the purposes of preventing and investigating crime and terrorism. The countries acquiring these systems must abide by their commitments to these requirements. We are currently studying the information that is published on the subject.”

However, other officials in Israel said Tuesday that the severity of the affair and its possible repercussions obligate “clearer actions and statements” from the government.

The officials expressed concern that sufficing with “studying” the issue won’t reduce the international criticism against Israel. Some officials warned that a “critical mass” of pressure could form and that failing to launch a public and transparent investigation could create the impression that Israel had something to hide, and that Pegasus was used for illegal purposes with the knowledge and approval of the government.

However, other officials said such an investigation could complicate relations with numerous sensitive countries, such as Saudi Arabia, the UAE, Morocco and Bahrain. In their view, Israel has a vested and clear interest in cooperating with the rulers of these countries against shared threats, such as Iran and Islamic terror, and said such an investigation could embarrass some of them and directly harm diplomatic relations.

Shalev Hulio, founder and CEO of NSO Group, responded Tuesday to the growing firestorm surrounding his company, saying he “wishes the Israeli government would launch an investigation to clear us of these false accusations.”

Hulio said the “wrong” report published on Sunday against his company was “based on incorrect premises, within the framework of a well-organized and well-timed campaign by known interested parties. The company is weighing its legal steps against the delusional claims put forth in the report.”

Speaking to 103 FM Radio, Hulio said, “The platform that we create is a platform that saves lives and prevents terrorist attacks, and that needs to be understood. NSO has no list of targets. We made some decisions that are like the NSO Group constitution, and they accompany us to this day. The first is that we only sell to governments and intelligence agencies, not to individuals or [private] organizations.

“The second decision was that we won’t sell to every government, since there are some governments that should not have such tools,” he said.