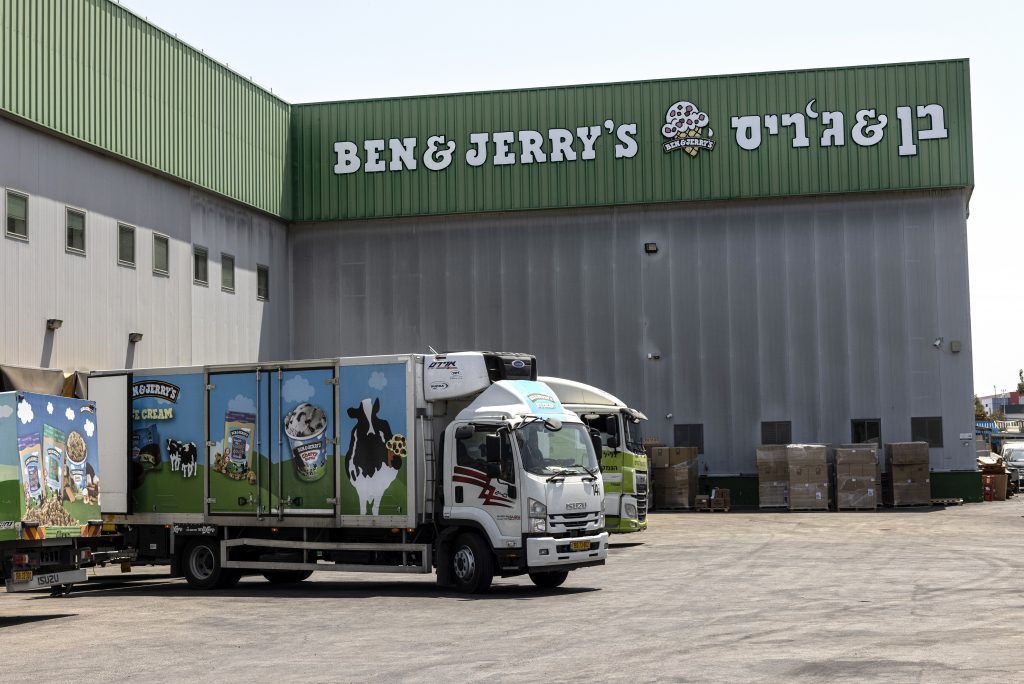 The announcement on Monday that Ben & Jerry’s will end sales of its ice cream in Yehuda and Shomron but will continue operations in the rest of Israel did not reflect the company’s full intention, according to its chairwoman of the board.

Anuradha Mittal, told NBC News that the statement saying the company will no longer distribute its products in the “Occupied Palestinian Territory” but will remain in Israel was released by the parent company Unilever without consulting with the ice cream maker’s board, which had intended to issue a statement making no mention of carrying on sales in Israel at all.

If Ben & Jerry’s follows through on that original intention, it would mark the rare instance of a Western company boycotting not just Yehudah and Shomron, but the entire state of Israel.

Mittal also revealed that the board had been seeking to sell the ice cream in Yehudah and Shomron for years. They had passed a resolution to that effect, but she said, the CEO, Matthew McCarthy, appointed by Unilever in 2018, “never operationalized it.”

Mittal did not rule out the company doing business in Israel in the future, but said that it was a decision for the board to make, not Unilever.

“By taking a position and publishing a statement without the approval of the independent board on an issue directly related to Ben & Jerry’s social mission and brand integrity, Unilever and its CEO at Ben & Jerry’s are in violation of the spirit and the letter of the acquisition agreement.”

The “social mission” refers to Ben & Jerry’s progressive stance in recent years. Among other things, the brand became openly politicized when it introduced the flavor Pecan Resist in 2018, signaling its opposition to the Trump administration.

The company said Pecan Resist celebrated activists who were resisting oppression, harmful environmental practices and injustice. As part of the campaign, Ben & Jerry’s said it was giving $25,000 each to four activist entities.

Unilever, meanwhile, was distancing itself from Ben & Jerry’s new Israel policy: “Unilever Israel does not manage Ben & Jerry’s locally,” the company said in a statement on Tuesday.

“The brand is run by a competitor’s business which owns the Ben & Jerry’s franchise in the Israeli market. Unilever Israel had no involvement in this decision. It was made by Ben & Jerry’s globally and its independent Board of Directors. We are very proud of our history in Israel and are fully committed to our long-term presence.

“In the last decade alone, the company has invested in the Israeli market more than 1 billion NIS, and will continue to invest in its people, brands, and business in the local market.” It employs 2,000 people, mostly in factories in Arad, Acre, Tzefas and Haifa, it said.

None of this spared Unilever from the wrath of Israeli officialdom. Prime Minister Naftali Bennett spoke with Unilever CEO Alan Jope on Tuesday morning and informed him that he viewed such an “anti-Israel step” with the “utmost gravity.”

Bennett “emphasized that from the perspective of the State of Israel, this is an action that has severe consequences, including legal ones, and it will take strong action against any boycott directed against its citizens,” according to a statement issued by his office.

The GPO statement did not record what Jope said in response.

Despite the wall-to-wall furor, not everybody was concerned by the Ben & Jerry’s announcement.

“In practical terms, I think that there will be no implications whatsoever,” Adi Schwartz, a fellow at the Center for International Communications at Bar-Ilan University, told the Times of Israel. “We know economically that BDS is a huge failure. There is no impact whatsoever on Israel’s economy.”

“With all due respect, there a few other ice cream producers that will be very happy to replace Ben & Jerry’s in Israel, in the West Bank,” he said.