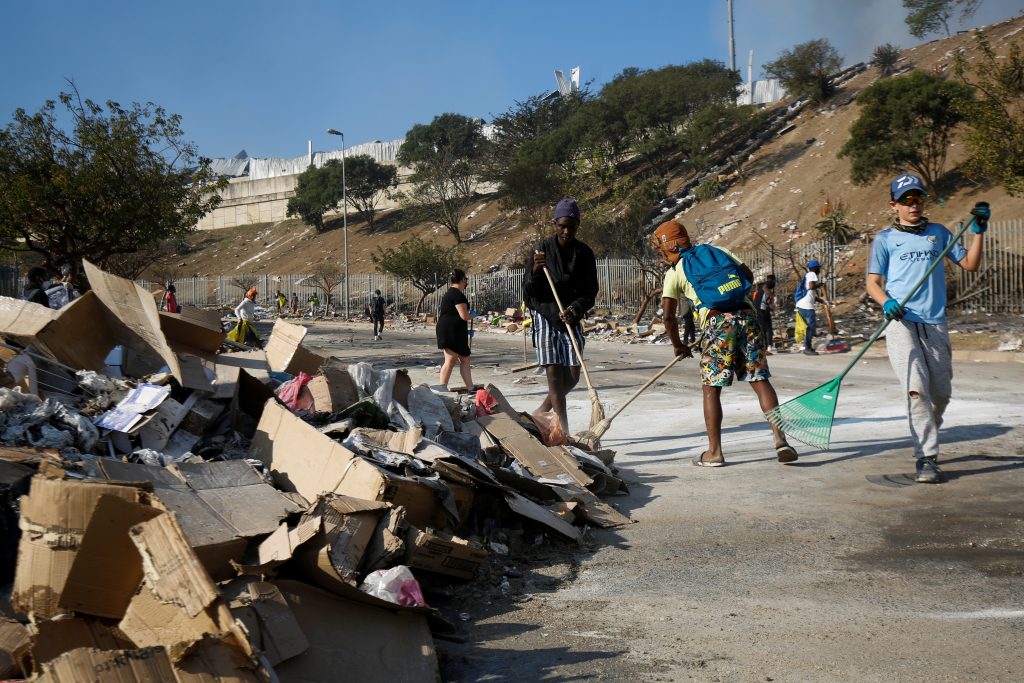 Looting continued in parts of the eastern port city of Durban, but in much of the main commercial city Johannesburg, shopkeepers and other residents sifted through the debris, cleared up trash and assessed what remained of their ruined businesses.

At Diepkloof Mall in Soweto, South Africa‘s biggest township and one of the worst affected areas, about 50 people swept up broken glass and packed empty shoe boxes into plastic rubbish bags, a Reuters reporter said.

The riots initially started in response to the jailing of ex-president Jacob Zuma last week for his failure to appear at a corruption inquiry. But they swiftly degenerated into looting and destruction, driven by widespread anger over the hardship and inequality that nearly three decades of democracy since the end of apartheid have failed to address.

Half the population lives below the poverty line, according to the latest government figures from 2015, and growing joblessness since the coronavirus pandemic began has left many desperate. Unemployment stood at a record high of 32.6% in the first three months of 2021.

Defense Minister Nosiviwe Mapisa-Nqakula said on Wednesday she wanted to deploy up to 25,000 soldiers in KwaZulu-Natal and Gauteng Provinces, where security forces were struggling to quell the days of looting, arson and violence.

Authorities say 5,000 troops were already on the streets since Wednesday, double the number originally planned. It was unclear when the rest would arrive.

Security forces have so far arrested at least 1,350 people.

The ransacking of stores has left food and other essentials in short supply, which may become a serious problem in days to come. The closure of many petrol stations has also hit transport supply lines.

An unknown number of  people have been forced out of work due to the destruction of businesses.

Pillaging continued on Thursday in Durban, where a Reuters reporter saw crowds in the Mobeni neighborhood rolling away trolleys loaded with maize meal and other looted staples.

Some loaded pick-up trucks – one such truck had to be abandoned as it had run out of fuel. Taxi drivers blockaded some roads to try to prevent further looting.

In Johannesburg’s central business district and the township of Alexandra, both also hit hard by violence, the streets were calm.

In Soweto, Councillor Mpho Moerane said about 300 volunteers were cleaning all the damaged shopping centers across the township. Two men were putting up steel doors on the entrance to a Shoprite liquor store in Bara Mall that was completely cleaned out and littered with broken glass.

The unrest has also disrupted hospitals struggling to cope with a third wave of COVID-19. The National Hospital Network said on Wednesday it was running out of oxygen and drugs, most of which are imported through Durban. Some vaccination centers have been forced to shut.

Zuma, 79, was sentenced last month for defying an order to give evidence at a judicial inquiry probing high-level graft during his time in office from 2009 to 2018.

He has pleaded not guilty in a separate case on charges including corruption, fraud, racketeering and money laundering. He says he is the victim of a witch hunt by his political foes.