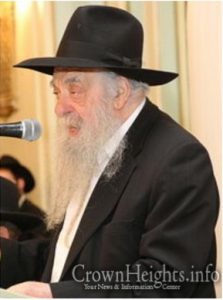 Rav Kahan was born in the Soviet Union on 16 Shevat, 5690/February 14, 1930. His father, Rafael Nachman Kahan, studied in the original Yeshiva Tomchei Temimim in the town of Lubavitch and authored multiple sefarim.

At a young age Rav Kahan emigrated to Eretz Yisrael together with his family, and studied in Yeshiva Achai Temimim in Tel Aviv under the tutelage of the famous mashpia Harav Chaim Shaul Brook. During his teen years, he also studied privately with the famed mashpia and teacher of Chassidic thought Harav Moshe Gourarie.

In 1950, Rav Yoel traveled by sea to New York in order to continue his studies at the central Yeshiva Tomchei Temimim at 770 Eastern Parkway. At the time, 770 was also the home and shul of the Frierdicker Rebbe of Lubavitch. When he finally arrived in New York, it was too late, and the Frierdiker Rebbe had already passed away. Rav Yoel remained in New York and became a chassid of the Rebbe.

He is survived by ybl”c his wife Rebbitzen Leah Kahan.