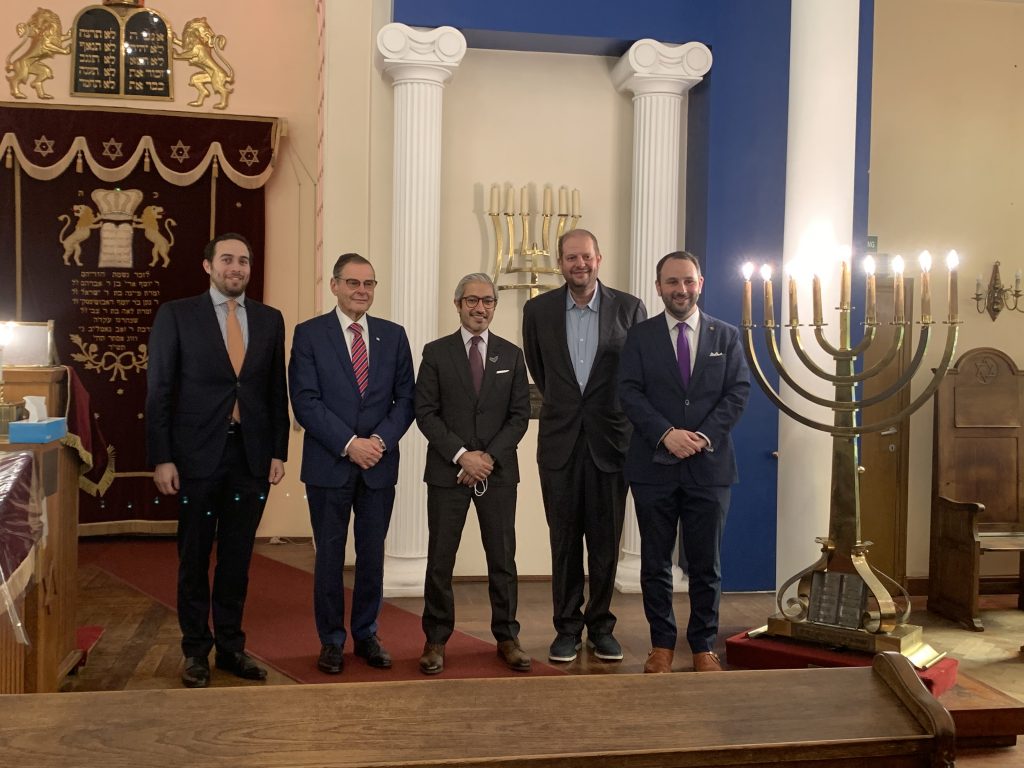 The kehillah in Antwerp hosted an honored visitor on Monday, when HE Muhammad Abushaab, the ambassador of the United Arab Emirates to Belgium, and also to the EU, was given a tour of significant kehillah sites by Michael Freilich MP, a kehillah member.

The ambassador was accompanied by his staff and an economic and cultural advisor. Mr. Freilich explained at the beginning of the tour that the Antwerp kehillah is very special as it contains people from many different religious groups, who all live and work together b’achdus.

The first stop on the itinerary was the Shomrei Hadass synagogue, where Mr. Naftali Pollak spoke to the ambassador and his party about some of the principles of Yiddishkeit. Mr. Pollak highlighted some of the similarities and differences between Judaism and Islam, for example, the prohibition on pictures and statues in shuls and mosques.

The group then went outside to the nearby Holocaust Memorial, dedicated to the 25,000 Jews who were deported from Belgium during the War. Mr. Freilich explained that the shul’s sifrei Torah and sefarim had been taken outside and burnt in the street and that the Memorial had been erected on that site. The ambassador and Mr. Freilich laid a commemorative wreath on the memorial together. Mr. Freilich told Hamodia, “This was a historic moment for me and for the Arab world. In some parts of the Muslim community in Belgium there is discomfort when the Holocaust is mentioned, so it was very important to see the ambassador publicly acknowledging it in this way.”

After this, the party visited the Belz kehillah, where Mr. Eliezer Sternlicht explained the concept of Chassidus to the ambassador. He was very engaged and asked lots of questions, pointing out that this sort of visit shows that the relationship between the UAE and Israel is not a “cold peace,” but rather a “warm peace.” The Ambassador was interested to see how sefarim open in the same way as books written in Arabic. Mr. Freilich introduced him to someone who was wearing tefillin and explained their construction and purpose. As a religious man himself, the ambassador related strongly to the idea of tallis and tefillin enabling a person to feel closeness to Hashem. Mr. Freilich said, “It was nice to speak to someone who shares an understanding of the importance of religion.”

The next stop was Hoffy’s Restaurant, owned by the brothers Hoffman, where the group enjoyed a dairy meal, as the visit was during the Nine Days. Mr Freilich explained that the Jews are still mourning the destruction of the Beis Hamikdash. The meal provided an opportunity to discuss the problematic issue of shechitah in Belgium, which is also an issue for the Muslim community, as is bris milah. The ambassador shared that every hotel in Dubai is required by law to provide kosher food if requested, and it was observed that many Israelis and recognizably Jewish people have visited recently, and been made very welcome.

The final place on the tour was the Machzikei Hadass kehillah, where the group spoke to the board of the shul. They discussed how they can work together to strengthen the religious perspectives and ideals within society, particularly European society, which does not place much emphasis on religion. Other topics for discussion were the possibility of business opportunities and the shared concerns about the destabilizing influence of Iran in the Middle East.

Mr. Freilich told Hamodia, “This was a very positive day and a real kiddush Hashem, particularly to the non-Jewish community. There is a common feeling that Jews and Arabs always fight and this visit shows that this is not the case. The peace which is slowing spreading across the Middle East can also come to Europe, providing a good outcome for everyone.”