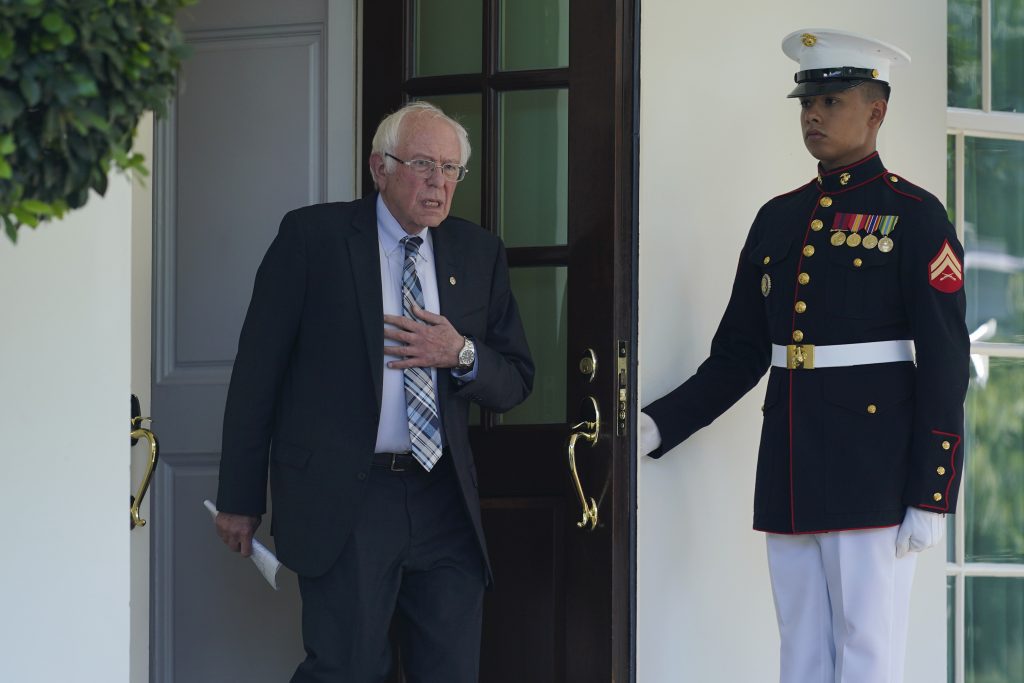 Emerging from a private meeting at the White House, Sen. Bernie Sanders said Monday that he and President Joe Biden are on the same page as Democrats draft a “transformative” infrastructure package unleashing more than $3.5 trillion in domestic investments on par with the New Deal of the 1930s.

Sanders, chairman of the Senate Budget Committee, and Democrats on his panel also huddled privately at the Capitol for two hours late Monday with Senate Majority Leader Chuck Schumer, D-N.Y., and key White House advisers during a consequential time for Biden’s top priority. Congress is racing to put together a sweeping proposal financing infrastructure, family assistance and other programs for initial votes later this month.

Sanders, I-Vt., said he had a “very good discussion” with Biden .

“He knows and I know that we’re seeing an economy where the very, very rich are getting richer while working families are struggling,” Sanders told reporters.

Sanders said he and the president did not discuss a topline figure, but the Vermont senator mentioned his own more far-reaching $6 trillion proposal, which includes expanding Medicare for older adults. Later at the Capitol, he told reporters that the Democrats’ package would be bigger than $3.5 trillion, an amount floated as in line with Biden’s initial proposal.

“The end of the day we’re going to accomplish something very significant,” Sanders said.

After Democrats’ evening meeting at the Capitol, Sanders said lawmakers were still discussing overall spending and other figures.

“What we’re trying to do is a multitrillion-dollar bill which is going to address long neglected problems of the working families in this country” and the problem of climate change, he told reporters.

Biden’s big infrastructure proposals are moving through Congress on various tracks — each potentially complementing or torpedoing the other.

A bipartisan group of 10 senators unveiled a nearly $1 trillion package of traditional infrastructure for roads, bridges, broadband and some climate change investments in electric vehicles and resiliency for extreme weather conditions.

Senators in the bipartisan group are struggling to draft their proposal into legislation but hope to have a bill ready as soon as this week. Disagreements are emerging over how to pay for it.

The rest of Biden’s ideas are being collected into the much broader multitrillion-dollar package that could be approved by Democrats on their own under a special budget reconciliation process that allows passage with 51 votes in the Senate, rather than the typical 60-vote threshold that’s needed to overcome a Senate filibuster.

Sanders, as chair of the Budget Committee, has been leading his colleagues in a series of private conversations. A one-time Biden rival for the presidency, Sanders now holds an influential position shaping the president’s top priority.

“My job is to do everything I can to see that the Senate comes forward with the strongest possible legislation to protect the needs of the working families of this country,” Sanders said at the White House.