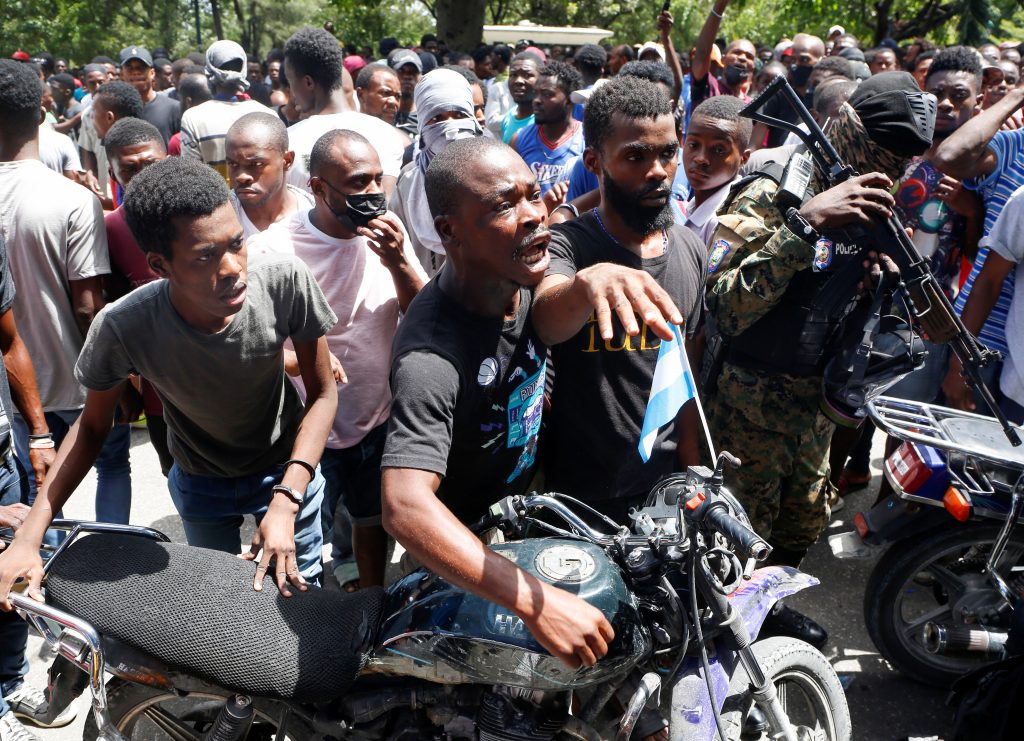 Gangs in Haiti have long been financed by powerful politicians and their allies — and many Haitians fear those backers may be losing control of the increasingly powerful armed groups who have driven thousands of people from their homes as they battle over territory, kill civilians, and raid warehouses of food.

The escalation in gang violence threatens to complicate — and be aggravated by — political efforts to recover from last week’s brazen slaying of President Jovenel Moïse. Haiti’s government is in disarray; no parliament, no president, a dispute over who is prime minister, a weak police force. But the gangs seem more organized and powerful than ever.

While the violence has been centered in the capital of Port-au-Prince, it has affected life across Haiti, paralyzing the fragile economy, shuttering schools, overwhelming police and disrupting efforts to fight the COVID-19 pandemic.

“The country is transformed into a vast desert where wild animals engulf us,” said the Haitian Conference of the Religious in a recent statement decrying the spike in violent crime. “We are refugees and exiles in our own country.”

Gangs recently have stolen tens of thousands of bags of sugar, rice and flour as well as ransacking and burning homes in the capital. That has driven thousands of people to seek shelter at churches, outdoor fields and a large gymnasium, where the government and international donors struggle to feed them and find long-term housing.

Those included dozens of disabled people who were forced to flee last month when gangs set fire to the encampment where they settled after being injured in the catastrophic 2010 earthquake.

“I was running for my life in the camp on these crutches,” said 44-year-old Obas Woylky, who lost a leg in the quake. “Bullets were flying from different directions. … All I was able to see was fire in the homes.”

He was among more than 350 people crammed into a school converted into a makeshift shelter where hardly anyone wore face masks against disease.

Experts say the violence is the worst they’ve seen since in roughly two decades — since before the creation of a second U.N. peacekeeping mission in 2004.

Programs aimed at reducing gang activity and an influx of aid following the earthquake helped quell some of the problem, but once that money dried up and aid programs shut down, gangs turned to kidnappings and extortion from businesses and neighborhoods they control.

The overall economy doesn’t help. The U.N. said the cost of a basic food basket rose by 13% in May compared with February, and that foreign direct investment fell by more than 70% from 2018 to 2020, dropping from $105 million to $30 million. That translates into fewer jobs and increased poverty in a country where 60% of the population makes less than $2 a day and 25% less than $1 a day.

Many also worry that the gangs could derail elections scheduled for September and November — a contest crucial to restoring functional legislative and executive branches now largely moribund in the wake of Moïse’s slaying.

But Haiti’s elections minister, Mathias Pierre, said Saturday that those backing the gangs may want to disrupt the elections. Such periods commonly see an upsurge in violence as groups try to use fear to nullify rivals’ advantages.

He said that wouldn’t work this time, noting that countries have held elections even during wars. “We need to organize elections. …They need to back off.”