Community Boy Whose Scooter Was Stolen Gets Replacement on Birthday
Community 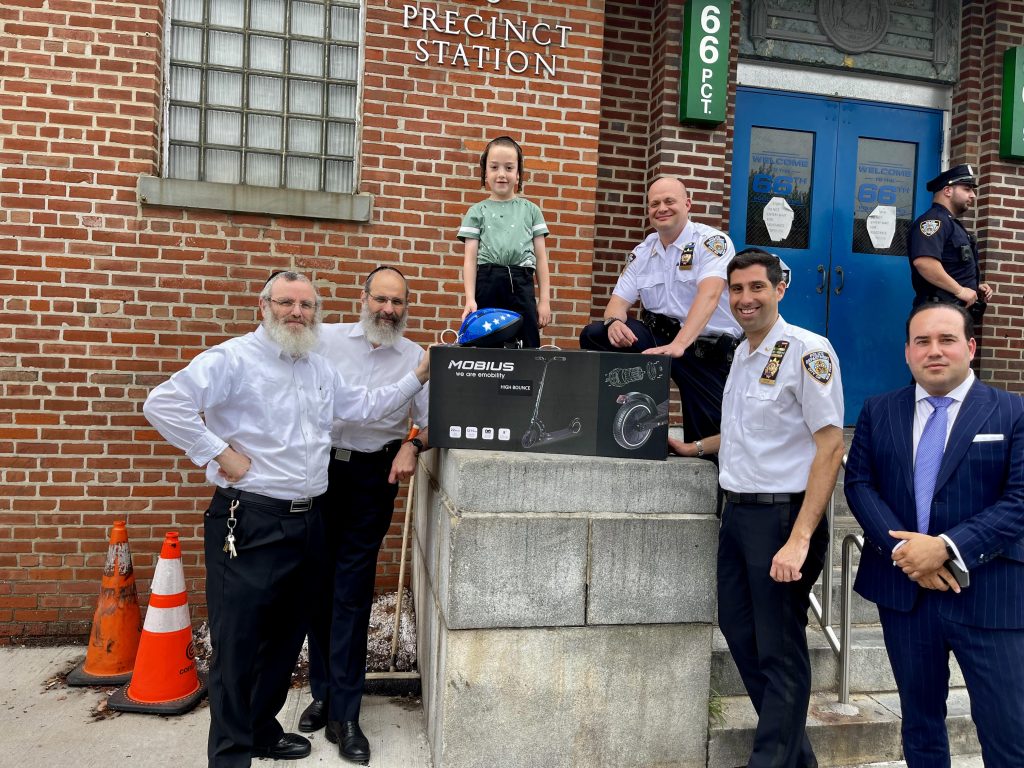 A Boro Park boy whose scooter was ripped away by a thief had a happy birthday Tuesday, when a local store owner gave him a gift of a new scooter.

Six-year-old Simcha was riding his electric scooter on 12th Avenue at 35th Street last Wednesday evening, when a man tore the scooter away from him and stole it. The story made headlines, appearing on the cover of the New York Post on Saturday, as a new low for a city that has at times during the past year seen a sharp spike in crime.

When Yonasan Schwartz, the owner of Toys 2 Discover on 18th Avenue, heard about Simcha’s story, he reached out to community activist Yanky Meyer, who put him in touch with Simcha’s father Pinchas.

“I felt bad, when I saw the story, because I know that electric scooters are very expensive items,” Schwartz told Hamodia. “I had rachamnus on the kid, and wanted to do a little ahavas chinam in the 9 days.”

On Tuesday, Simcha’s seventh birthday, Schwartz presented Simcha with the new scooter (which retails for $375) and a helmet in front of the 66th Precinct station, along with police officials and community liaisons. Schwartz told Hamodia that when he had asked to be put in touch with Pinchas, he had no idea who he was or what type of scooter had been stolen, but that when they met, Pinchas reached into his pocket and showed Schwartz the scooter receipt — it turned out that the stolen scooter had been the identical model, purchased from Toys 2 Discover.

The thief has not been apprehended.

Deputy Inspector Richie Taylor of the NYPD’s Community Affairs Bureau told Hamodia, “I applaud those who took the initiative to help make Simcha smile again. I believe more people will be encouraged to help others when they hear this story.”

Pinchas, who asked to be identified only by his first name, told Hamodia that he actually received calls from 35 people offering to replace Simcha’s scooter.

“I want to thank everyone from across New York City who reached out to me to offer a scooter, and to express support,” Pinchas said. “It made us feel that we are not alone, and that even though there are some individuals who can be so depraved as to steal a scooter from a child, there are so many more people who are decent and caring.”