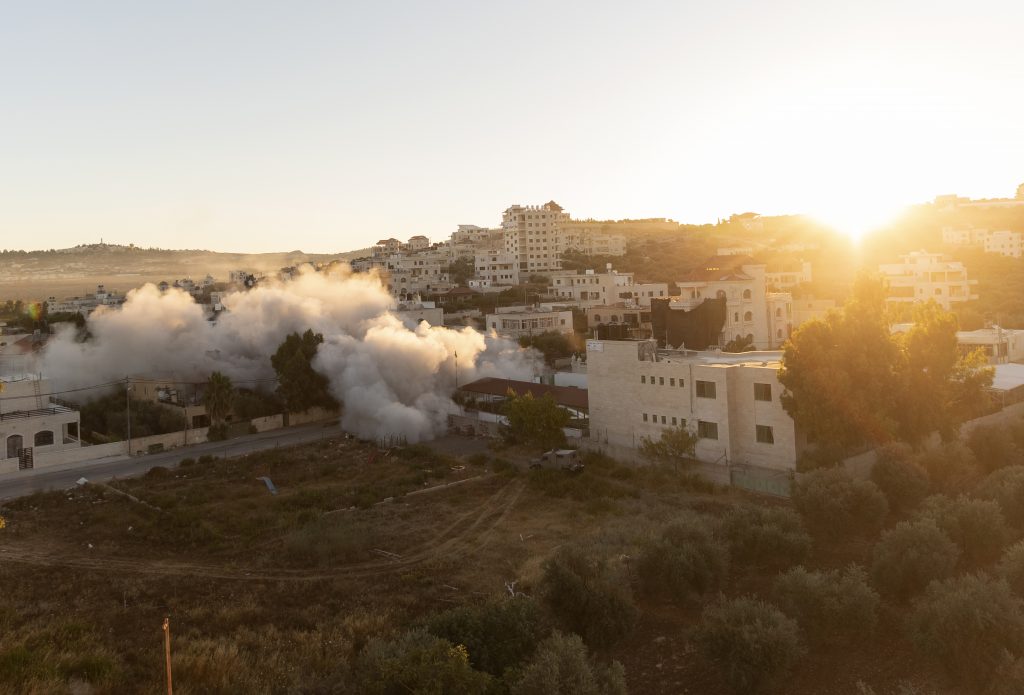 The Biden administration held its first public clash with Prime Minister Naftali Bennett, declaring that it has prioritized pressuring Israel to halt its punitive policy of demolishing the homes of Palestinian terrorists.

“We attach a good deal of priority to this,” State Department spokesman Ned Price told reporters in Washington.

The issue came to the forefront in advance of Bennett’s first visit to Washington to meet with President Joe Biden, after the IDF on Thursday razed the home of the Palestinian-American terrorist Muntasir Shalabi.

Secretary of State Antony Blinken had personally intervened and spoken to a “senior Israeli counterpart” prior to the demolition, Price said.

“The secretary and other senior officials here at the State Department in recent days have raised these concerns directly with senior Israeli officials and we will continue to do so as long as this practice continues,” Price said.

“We attach a good deal of priority to this, knowing that the home of an entire family shouldn’t be demolished for the action of one individual,” Price said when asked about the matter at a daily press briefing, adding that the U.S. would continue to raise its concerns “as long as this practice continues.”

Price’s comment appeared to reflect a shift from previous administrations, which had not made as large an issue out of Israeli home demolitions.

“There is a critical need to lower the temperature in the West Bank. Punitive demolitions exacerbate tensions at a time when everyone should be focused on principally ensuring calm,” Price said.

Bennett did not heed the U.S. objections. Early Thursday morning the IDF demolished the Shalabi’s stone home located in the Palestinian town of Turmus Aiya, near Ramallah.

Shalabi had been indicted for killing Yehuda Guetta, Hy”d, 19, in a drive-by shooting at the Tapuach junction at the beginning of May. He was also indicted for the attempted murder of two students, also injured in the shooting.

Five other Palestinians were also indicted for the obstruction of justice because they provided Shalabi with a hiding place during the initial manhunt.

Within hours of the demolition, the U.S. Embassy issued a condemnation.

“The home of an entire family should not be demolished for the actions of one individual,” the embassy spokesperson said.

“We believe it is critical for all parties to refrain from unilateral steps that exacerbate tensions and undercut efforts to advance a negotiated two-state solution; this certainly includes the punitive demolition of Palestinian homes,” the spokesperson added. Price later repeated the same statement.

A source in Bennett’s office replied: “The Prime Minister appreciates and respects the U.S. At the same time, [the Prime Minister] acts solely in accordance with security considerations of the State of Israel and the need for protection of the lives of Israeli citizens,” the source said.

It is rare for a Palestinian terrorist to have a U.S. passport.

The High Court of Justice had rejected a petition against the demolition as well as a subsequent appeal, filed by HaMoked. It had argued that the structure was not Shalabi’s primary home, but rather that of his estranged wife from whom he separated years ago.

“This was the only home of a woman who had effectively separated from the suspect years ago, while he lived most of the time with his other wives and children in homes he owned in the United States,” HaMoked said. “Thus, the suspect did not have significant ‘residential ties’ to the house.”

The NGO also argued that Shalabi suffered from mental illness and had “repeatedly stated that he was motivated by suicidal thoughts.”