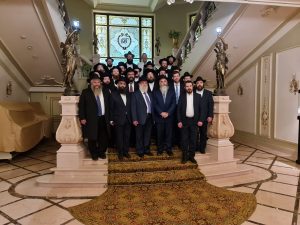 In an impressive and exciting ceremony, the first branch of the “European Chessed Center” was inaugurated this week in Odessa, Ukraine. The branch is one of dozens that will open over the next two months throughout Europe.

The unique project constitutes instrumental breakthrough for the Jewish communities in Europe, as similar lending centers exist in Israel but lack presence throughout Europe. Each lending center provides medical equipment for all ages, from infants to the elderly, worth tens of thousands of euros. Arrival of the equipment is in process at present.

The ceremony was the peak of the professional seminar called “Covid-19 and its Consequences” organized by the “Rabbinical Centre of Europe” for European rabbis. Dozens of community rabbis throughout Europe congregated in Odessa to take part in professional discussions potentially assisting them in their pious activities.

The opening ceremony in Odessa was presided by the Chief Rabbi of Odessa, Rabbi Avraham Wolf; Rabbi Moshe Asman, the Chief Rabbi of Ukraine; representatives of the municipal administration and the authorities; senior health officials in the city, and public representatives. Director General of the RCE Rabbi Arie Goldberg, Deputy Director General of the RCE Rabbi Yosef Bainhaker and Rabbis of Jewish communities throughout Europe.

The first speaker was the Chief Rabbi of Odessa and Southern Ukraine Rabbi Avraham Wolf, who praised the great revolution that began and already made waves in all Ukrainian communities. He expressed great appreciation to the “Rabbinical Centre of Europe” for choosing Odessa as it’s maiden branch.

Chief Rabbi of Ukraine Rabbi Moshe Reuven Asman, said that the unique initiative was launched at a great time of need, and emphasized the fact that dozens of Jews were saved by utilizing oxygen generators that the Jewish community in Kiev managed to obtain during the pandemic. 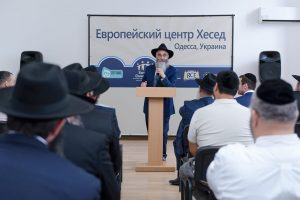 Director General of the RCE Rabbi Arie Goldberg, emotionally expressed that after seeing the unprecedented scale of tremendous development of the Jewish community in Odessa led by the Rabbinical leader Rabbi Wolf, he decided to open the first branch of the “European Chesed Centre” in Odessa. He thanked the chairman of the RCE and the European Jewish Association, Rabbi Menachem Margolin, who significantly invested in this project, and to Director General of the RCE and director of the project Rabbi Yosef Bainhaker, who worked 24/7 for its successful takeoff.

Odessa Deputy Mayor Mr. Pavel Valdimarovich Vogelman praised the unique initiative that has not existed in Odessa and the whole of Ukraine till now.

Mr. Nikogen Rubenovich, chairman of the Odessa Department of Health, noted the professional aspect of the project. The equipment boasts high quality, and all can see that no expense was spared, and the most expensive and sophisticated medical equipment was provided.

There wasn’t a dry eye to be seen when Mr. Roman Markowitz Schwartzman, chairman of the Association of Holocaust Survivors in Odessa, expressed the Holocaust survivors’ need for equipment and how important it is to them. “Baruch Hashem, we are provided with hot meals, but many of us do not have the ability to walk from the bed to the kitchen, and now we can.” he said.

As mentioned, the opening ceremony was the summit of the professional seminar for European Rabbis, which convened for the first time since the outbreak of the pandemic. For three days practical and professional discussions were presented on how to deal with COVID-19 and its aftermath.

During the seminar, the Rabbis heard professional lectures from experts, led by the renowned educator Rabbi Pinchas Brair, chairman of the ‘Legadel’ organization, and Rabbi Avraham Rainman, one of the top professionals in educational counseling in Israel.

During the seminar, the Rabbis visited the educational institutions, the orphanages, and the Jewish University in Odessa. They were in awe of the enormous development infused in the network of institutions around the clock, covering all ages, which manifest an empire for Torah education and kindness, illuminating Western Ukraine.