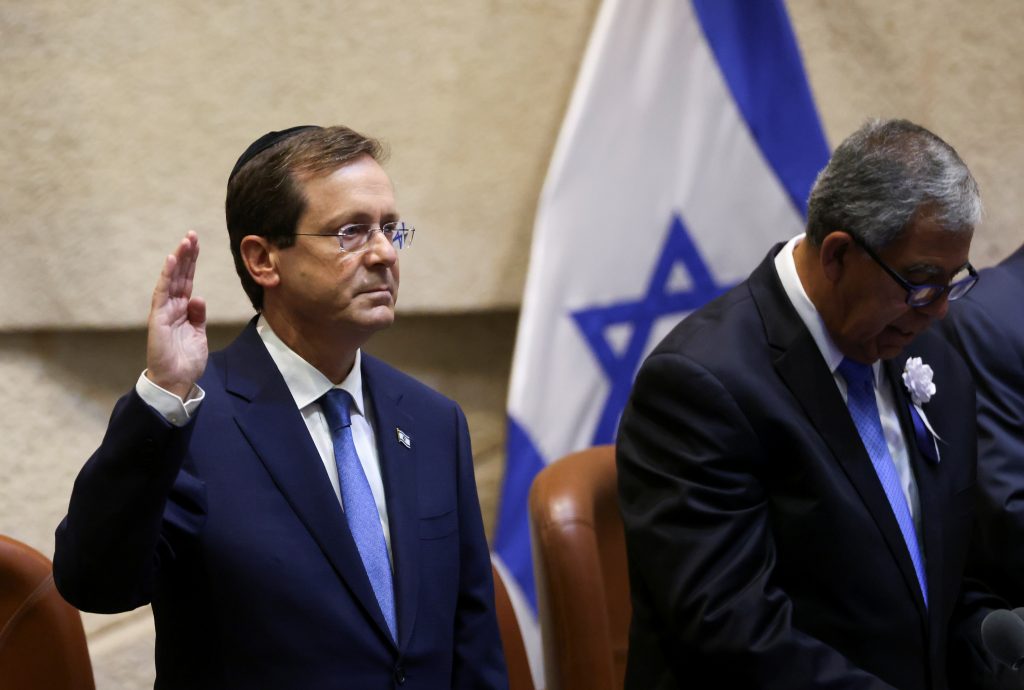 The Knesset inaugurated Yitzchak Herzog on Wednesday as the nation’s president, a largely ceremonial position whose purpose is forge to national unity and serve as the country’s moral compass.

The inauguration ceremony at the Knesset is typically conducted with grand pomp: honor guards in dress uniforms, red carpet, mounted police escort and a swearing in, followed by the blowing of a shofar by military rabbis.

Herzog, scion of a prominent family, will succeed Reuven Rivlin as Israel’s 11th president and is to hold office for a single seven-year term. His father, Chaim Herzog, served as president in the 1980s after a term as Israel’s ambassador to the United Nations, and his grandfather, Harav Yitzchak HaLevi Herzog, zt”l, was the country’s first chief rabbi. His uncle, Abba Eban, served as foreign minister and ambassador to the United Nations and United States.

Herzog was sworn in on a 107-year-old Chumash, the same one that his father was sworn in on. The Chumash was a gift from his grandfather, from Harav Herzog’s zt”l time as Chief Rabbi of Glasgow.

“The truth is that I am a little envious of you,” Rivlin said in a letter to Herzog. “In a short while you will discover what a great and wonderful privilege you have” to be president of all of Israel’s various communities — Jews and Arabs, religious and secular, young and old.

Herzog, 60, was elected to the presidency by the Knesset last month. He had previously served as head of the Labor Party and head of the opposition in parliament. After leaving politics in 2018, he served as head of the Jewish Agency, a nonprofit organization that works closely with the Israeli government to promote Jewish immigration to Israel and to serve Jewish communities overseas.

Taking office at a time of deep divisions in Israeli society, Herzog said upon his election that he intends to be “the president of everyone” and work to preserve Israel’s democracy.

In his speech, he said his “mission, the [central] task of my term, will be to do everything to rebuild hope” in Israeli society and called for moderating the rhetoric among politicians, and that hatred and mistrust “exacts a heavy price.”

While most of the office’s function is to receive foreign dignitaries and other ceremonial roles, the president has the power to grant pardons.

He also is responsible for selecting a political party leader to form a governing coalition and serve as prime minister after parliamentary elections — a task Rivlin has done five times while in office, most recently after the March 23 election.