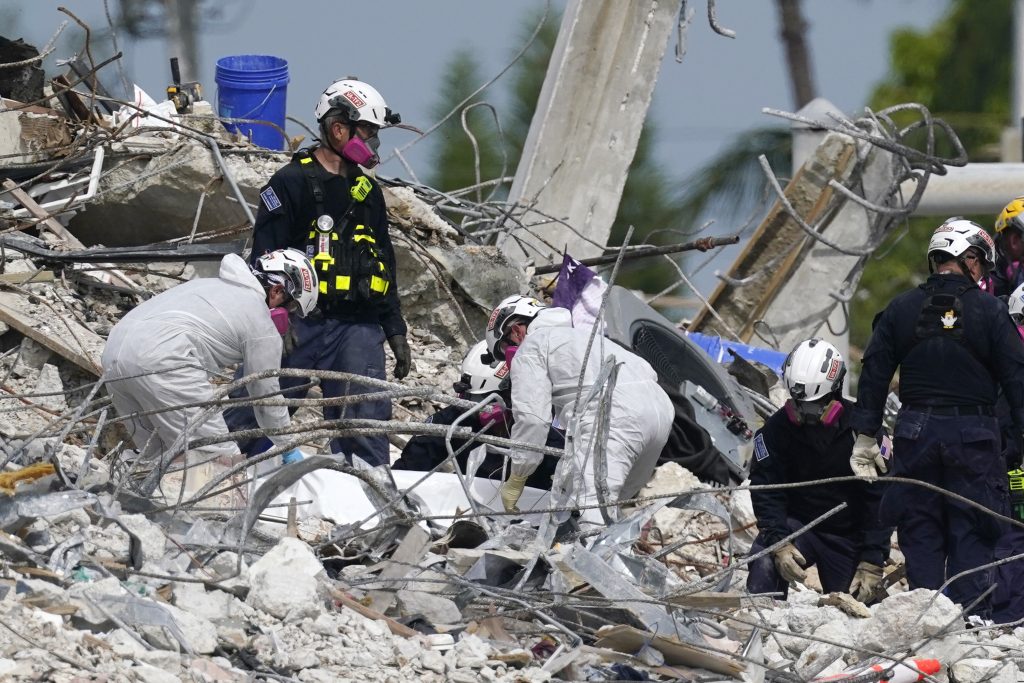 A ramped-up rescue effort at the collapsed condo building faced new threats from the weather as Tropical Storm Elsa began lashing Florida, on a path that would mostly spare South Florida.

Bands of heavy rain were expected in Surfside as Elsa strengthened on Tuesday, possibly becoming a hurricane again before making landfall somewhere between Tampa Bay and Florida’s Big Bend and crossing northern Florida. The search crews can work through rain, but lightning from unrelated thunderstorms have forced them to pause at times, and a garage area in the rubble has filled with water, officials said.

“Truly they live to save lives, and they’ve pushed ahead no matter what is thrown in their way,” she said at an evening news conference.

Still, crews got a big boost when the unstable remaining portion of the Champlain Towers South building came down Sunday. The demolition — prompted by fears that the structure could fall — allowed rescuers into previously inaccessible places, including bedrooms where people were believed to be sleeping at the time of the disaster, officials said.

“The site is busier and more active now than I’ve seen it since we began, now that the damaged building is down,” Surfside Mayor Charles Burkett said, adding that heavy equipment was now able to move freely around the site.

Rescuers hoped to get a clearer picture of voids that may exist in the rubble as they search for anyone still trapped under the fallen wing of the building, but they found very few voids, Miami-Dade Assistant Fire Chief Raide Jadallah told family members late Monday.

No one has been rescued alive since the first hours after the collapse, but rescuers were still holding out hope of reuniting loved ones.

“We continue to remain focused on our primary mission, and that is to leave no stone unturned and to find as many people as we can and to help bring either some answers to family and loved ones or to bring some closure to them,” City of Miami Fire Rescue Capt. Ignatius Carroll said.