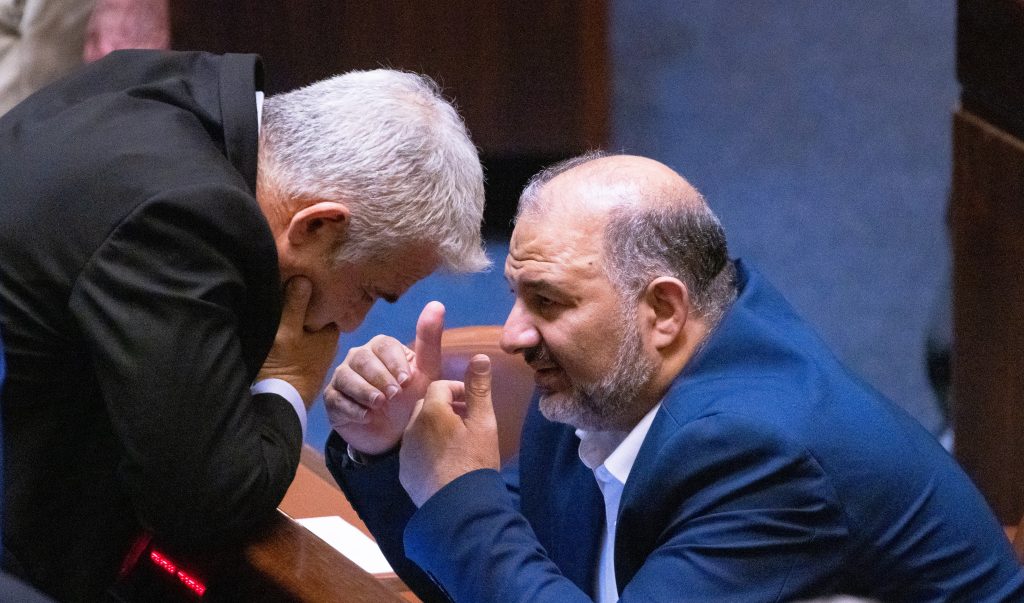 Interior Minister Ayelet Shaked has been trying to work out a compromise in the reunification law that will win the support of MKs from Ra’am and Meretz, and give the coalition a majority to pass it.

The compromise involves a six-month extension on the measure banning automatic citizenship for Palestinians who marry Israelis, while several hundred families will get improved status, Channel 12 reports. A committee will then be formed to submit recommendations within three months.

However, it seemed unlikely as of Monday evening that Shaked would attain the sought-for majority.

Ra’am MK Mazen Ghanaim told The Times of Israel that he will vote against renewing the 2003 ban on Palestinian family unification no matter what.

“A solution for 1,000, 2,000 families, that’s not a solution. We’re talking about tens of thousands, and this is first and foremost a humanitarian issue,” Ghanaim maintained, adding that he could see no way to compromise on it.

Prime Minister Naftali Bennett again invoked national security in his latest appeal to the Likud-led opposition to vote with the coalition. As it stands, they will not have enough votes for passage without them.

“Allowing in thousands of Palestinians and harming national security for another quarter of a political point is simply not the right thing to do,” Bennett said. “We are seeing childish games [by the opposition]… while what’s needed is national responsibility.”

The law was initially passed after 130,000 Palestinians entered Israel via family reunification between 1993 and 2003, including during the Second Intifada. The stated concern at the time was that some Palestinians gaining Israeli status would engage in terrorism, but there was also a demographic aspect—that without the ban an estimated 200,000 Palestinians would gain Israeli citizenship or residency each decade, Channel 12 reported.

Opposition chairman Binyamin Netanyahu said his bloc was prepared to back the extension of the reunification law for two months if the coalition agrees to pass a more stringent Basic Law on the matter that would permanently bar granting citizenship to Palestinians who marry Israelis without requiring an annual extension.

“Bennett and Lapid are unable to preserve the Jewish character of the State of Israel,” Netanyahu said at a Likud faction meeting, repeating his charge that the ideologically mixed coalition is not viable.

Speaking at the Knesset plenum on Monday, Netanyahu said, “Bennett and Shaked say they have formed a Zionist government, a government that is 10 degrees to the right of previous governments, yet they are unable to pass such a simple decision because they are reliant on anti-Zionist parties who oppose Israel as a Jewish and democratic state.”

The deadline for reextending the ban is midnight on Tuesday.