Foreign Minister Yair Lapid made a slight diplomatic mistake Sunday when he congratulated the United States on its Independence Day in a tweet that included the flag of Liberia instead of the Stars and Stripes.

The African nation’s flag resembles the Star-Spangled Banner, with 11 red and white stripes and a white star on a blue square background in the top left corner. 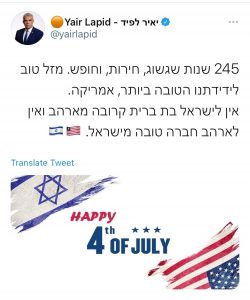 He ended the tweet with two emojis — the flag of Israel and that of Liberia.

The post quickly became the target of mockery by social media users.

The tweet was soon taken down and replaced with another containing the same message, sans the flags.