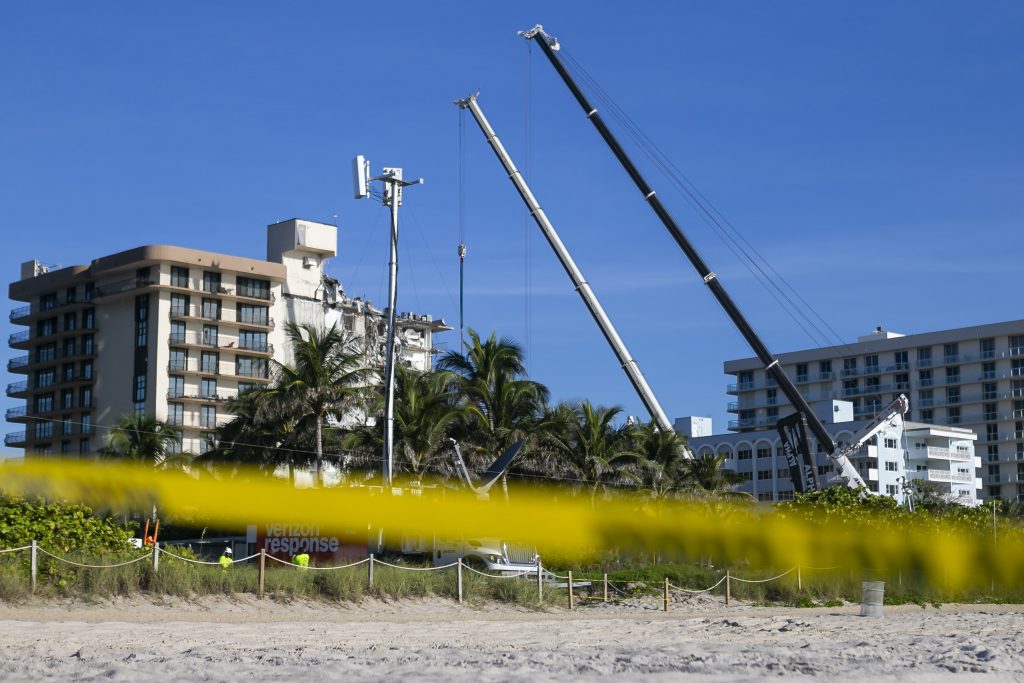 Demolition specialists carefully bored holes Sunday to insert explosive charges into the precarious, still-standing portion of a collapsed South Florida condo building that will come down to open up new areas for rescue teams to search.

Eighty percent of the drilling work was complete, and the remaining structure could come down as soon as Sunday night, Miami-Dade Assistant Fire Chief Raide Jadallah told relatives of those missing in the collapse. The timing, however, was still not set.

Jadallah praised the speedy work of the demolition crews and drew applause from families eager for the search to restart when he said the implosion could happen sooner than initially expected. No one has been rescued alive since the first hours after the June 24 collapse.

The search-and-rescue mission at the Surfside building was suspended Saturday afternoon so workers could begin the boring work. Jadallah said the suspension was a necessary safety measure because the drilling could cause the structure to fail, but a family member could be heard calling that news “devastating.”

Once the structure is demolished, the remnants will be removed immediately with the intent of giving rescuers access for the first time to parts of the garage area that are a focus of interest, Jadallah has said. That could give a clearer picture of voids that may exist in the rubble and could possibly harbor survivors.

“Once this building is down, it’s going to be a green light, full speed ahead, maximum effort to pull these victims out and reunite them with their family,” Surfside Mayor Charles Burkett told CBS’ “Face the Nation.”

So far, rescuers have recovered the remains of 24 people, with 121 still missing. The Miami-Dade Police Department on Saturday night added Graciela Cattarossi, 48, and Gonzalo Torre, 81, to the list of those confirmed dead.

Officials began considering the demolition at Champlain Towers on Thursday when parts of the remaining building shifted, endangering rescuers and prompting a 15-hour suspension in their work.

Approaching Tropical Storm Elsa added urgency to those plans with forecasts suggesting strong winds could enter the area by Monday. The latest forecasts have shifted the projected storm path westward, but the Surfside area could still face rain and wind.

The detonation will aim to bring the remaining portion of the building straight down and toward the street side, away from the existing debris field, Jadallah said.

Search and rescue efforts should resume between 15 and 60 minutes after the structure is brought down, he said.

Miami-Dade police will go door-to-door to evacuate residents in surrounding buildings in advance of the demolition, Surfside officials said. No one will be allowed in the buildings to the immediate north and south of the collapsed structure.