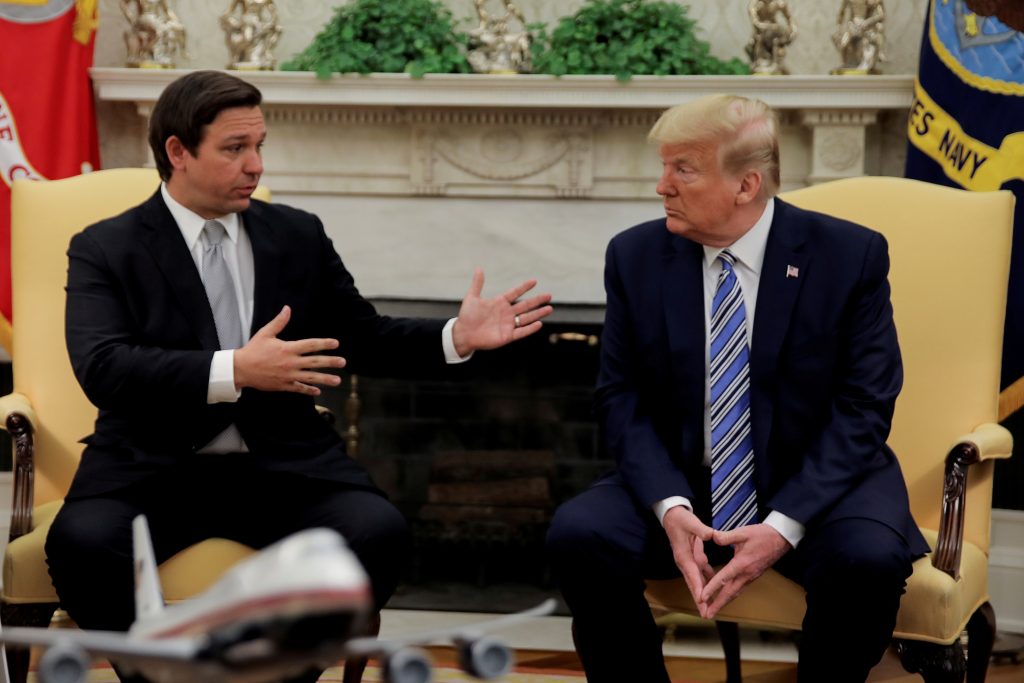 A Republican firebrand who relishes partisan warfare, Florida Governor Ron DeSantis has tried to abstain from politics in the wake of a fatal building collapse near Miami, spending much of his week meeting with rescue workers and grieving families at the disaster scene.

But politics will be unavoidable on Saturday, when former President Donald Trump will stage a campaign-style rally 250 miles across the state, as part of his return to public life following his election defeat last November. Trump has repeatedly claimed that he defeated Democratic President Joe Biden.

The event in Sarasota will be the latest episode in the evolving dynamic between Trump and DeSantis, allies who potentially could be rivals for the Republican presidential nomination in 2024.

Trump, 75, could be considered DeSantis’s political patron. He backed DeSantis, 42, when the then little-known U.S. congressman ran for governor in 2018, propelling him over a more established Republican contender.

But things have shifted as DeSantis’s profile rises, people close to the political situation in Florida say.

As Trump nursed grievances over his election loss at his home in Palm Beach, DeSantis has been at the forefront of Republican-led fights against strict anti-coronavirus lockdowns, racial justice protests and expanded ballot access, enjoying the kind of platform that Trump now lacks. In addition, Trump is suspended or banned by social media giants, which all determined he incited violence at the Capitol on Jan. 6.

For some Republicans who grew weary of the incessant turmoil of Trump’s four years in the White House, DeSantis offers the promise of a presidential candidate who shares many of Trump’s views but is less incendiary, according to interviews with more than a dozen Republican voters, party officials and strategists.

Trump has been watching closely, a person familiar with the situation said, requesting anonymity.

“He thinks that Ron DeSantis is probably the only present threat to him winning a Republican nomination, that he is the only sort of serious speed bump in President Trump’s way,” the person said.

In a straw poll of potential 2024 candidates at a conservative conference in Denver in June, DeSantis finished ahead of Trump, 74% to 71%.

“If Donald Trump has any plans for 2024, he needs to stop Ron DeSantis’s ascent right now,” said David Jolly, a former Republican congressman from Florida, “because DeSantis is quickly becoming the leader of the party.”

Still, Trump remains the most popular figure in his party.

The fight for the 2024 nomination will most likely hinge on what he decides to do, said Justin Sayfie of Ballard Partners, a Florida-based lobbying firm with ties to both men.

“It’s Donald Trump’s if he wants it,” Sayfie said. “There will never be a Donald Trump-Ron DeSantis primary.”

DeSantis, whose office declined an interview request citing the Surfside tragedy, has maintained that his only political focus is on winning re-election in Florida next year.

At the same time, he has been wooing Republican donors nationwide, embarking on a fundraising tour that took him to places such as Kentucky and southern California. His political action committee has taken in more than $30 million this year alone.

DeSantis’s leading Democratic opponent, former Governor Charlie Crist, raised about $1.3 million in a month after announcing his candidacy in May. State Agriculture Commissioner Nikki Fried is also bidding for the Democratic nomination.

Kelly Craft, the former U.S. ambassador to the United Nations under Trump, had a fundraiser for the governor at a friend’s horse farm in Lexington, Kentucky, that brought in about $245,000.

DeSantis, Craft said, “did not talk about the presidency other than complimenting former President Trump. He was really focused on Florida and the re-elect.”

She said, however, that he made an impression on the attendees. “We were just very impressed with his leadership skills during the pandemic.”

DeSantis repeatedly clashed with both the federal government and local Democratic-led cities in Florida over COVID-19 policies, pushing to relax restrictions on businesses and open schools and overriding local regulations such as mask mandates.

That has given DeSantis a story to tell at conservative gatherings. As the featured speaker at a Republican dinner in Pittsburgh, Pennsylvania, in May, DeSantis talked about “free states” versus “lockdown” states, said Sam DeMarco, chairman of the Allegheny County Republicans.

DeMarco said he hopes DeSantis runs in 2024, even if Trump chooses to run. “This is no disrespect to President Trump. People deserve a choice.”

Since the condominium building collapse a week ago, DeSantis has flown back and forth between Miami and his office in Tallahassee. On Wednesday, the governor stood upright with his hands folded, surrounded by local and state officials briefing the public on the search for survivors in the rubble.

DeSantis’s office has not said whether he will attend Trump’s rally. Officials close to Trump say it will go on as planned, and the former president has instructed his team to collect relief aid for Surfside families on site.

Jessica Taylor, a political analyst for the Cook Political Report in Washington, said DeSantis’s fortunes have improved since the start of the year, and he’s now in a better position to be re-elected.

“He’s in good position for an incumbent,” she said. “At the same time, that has benefited his 2024 aspirations.”

But Scott Reed, a Republican strategist, thinks DeSantis’s surge risks a backlash from his benefactor.

“This is Trump 101. Anyone who gets more attention than him becomes a political enemy,” Reed said. “DeSantis is the hot ticket right now. But in a way he’s peaking two years too early.”