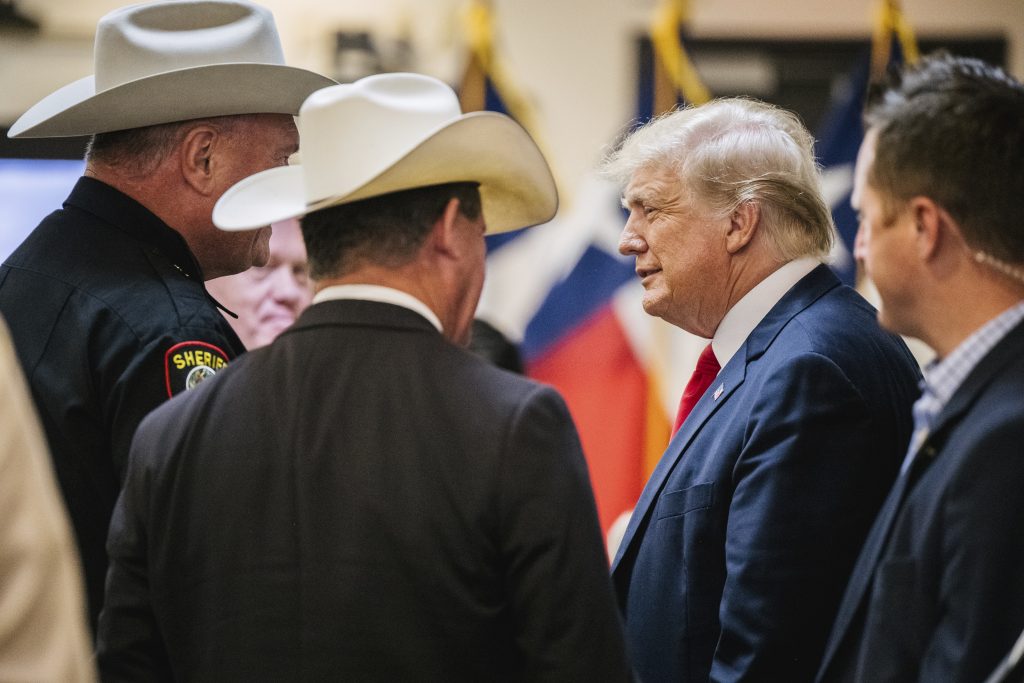 Fresh off his first rally since leaving the White House, former President Donald Trump stepped further back into the political spotlight with a visit to the southern border on Wednesday, hammering the Biden administration for its immigration policies amid a decades-high spike in crossings.

Trump was invited to South Texas by the state’s governor, Greg Abbott, and joined by a handful of House Republicans, who made the trip from Washington to stand by his side. Abbott, who is up for reelection next year and is considered a potential 2024 presidential candidate, has taken up Trump’s immigration mantle, vowing to continue building the southern border wall, which the Biden administration has suspended.

Trump was also joined by a cadre of former members of his administration, including the ex-acting homeland security secretary, giving the event the feel of a journey back in time for Trump, who continues to insist he won the 2020 election.

The visit underscores the extent to which Republicans, both nationally and in the states, continue to embrace Trump as their leader. It also demonstrates how the GOP is embracing Trump’s signature issue of immigration as they look to recapture control of Congress in next year’s midterm elections.

While President Joe Biden has enjoyed high approval ratings in the first months of his administration, immigration has consistently been a weak spot. A May Associated Press-NORC Center for Public Affairs Research poll found more than half of Americans — 54% — disapprove of his handling of the issue, compared with 43% who approve. And a recent Quinnipiac University poll of Texas voters found 64% disapprove of the way Biden is handling the situation at the border; 29% approved. (Abbott fares far better on the issue, with voters split 46%-47%.)

Trump has hammered the issue in nearly every appearance he has made since leaving office in January. And on Wednesday, he continued to assail the Biden administration for reversing the policies he’d enacted as he received a border security briefing in Weslaco before a tour.

“Now we have an open, really dangerous border,” Trump said.

U.S. Customs and Border Protection recorded more than 180,000 encounters on the Mexican border in May, the most since March 2000.

Nearly 19,000 unaccompanied children were picked up along the border in March 2021, by far the highest month on record. The number of families and children traveling without their parents crossing into the U.S. has dropped sharply since March and April, though encounters with single adults have remained high.

Biden has exempted unaccompanied children from the pandemic-related ban on asylum, allowing them to stay in the United States to pursue humanitarian protection in immigration courts. His administration has abandoned many of Trump’s hard-line policies, most notably one that forced asylum-seekers to wait in Mexico for hearings in U.S. immigration court. He says he is working to build a “humane” asylum system to take its place.

The visit comes days after Vice President Kamala Harris, whom Biden tapped to lead his administration’s response to the migrant increase, traveled to Texas amid growing pressure from Republicans and some in her party.

In recent weeks, Abbott has rolled out get-tough plans and rhetoric on immigration not seen before even in Texas. He’s promised to continue building Trump’s border wall and announced plans to shift $250 million in state dollars to new barrier and finance more through crowdsourcing. Texas state troopers plan to begin arresting border crossers and jailing them for state crimes, such as trespassing. And Abbott and Arizona Gov. Doug Ducey have also asked governors to send additional law enforcement staff and resources to the border. Florida Gov. Ron DeSantis and South Dakota Gov. Kristi Noem — two other potential 2024 White House contenders — are among those who have obliged.

Still, Abbott’s characterization of the Texas border as a growing emergency is disputed by some local officials in the most populous counties along the border, including Hidalgo County, which Trump was visiting. The counties have rejected Abbott’s efforts to use the current number of border crossings as justification to issue sweeping disaster declarations, which are usually reserved for hurricanes and fires.

But other Texas counties controlled by Republicans are signing on, including Galveston County, which on Tuesday said it was willing to give more than $6 million in federal recovery funds to help the governor build new border barrier.

While Republicans lost the White House and control of both chambers of Congress in 2020, South Texas was seen as a bright spot for the party, which made surprise gains among Hispanic voters, including in the Rio Grande Valley, which was once considered a Democratic stronghold.

Trump has ramped up his public appearances in recent weeks, holding his first rally since leaving the White House over the weekend in Ohio. He’s planning another over the July Fourth weekend in Florida, which aides say will proceed despite reports that DeSantis had asked him to postpone as rescue workers search for signs of life after the catastrophic building collapse in Surfside.

“Like all Americans, President Trump sends his deepest condolences to those who’ve lost loved ones or been displaced by the terrible tragedy in Surfside. The event in Sarasota, however, is on the other side of the state, 3 1/2 hours away, approximately the same distance from Boston to New York, and will not impact any of the recovery efforts,” said his spokesperson, Liz Harrington. She said Trump has instructed his team to collect relief aid for affected families online and at the rally.

Trump and Abbott will participate in a town hall hosted by Fox News Channel’s Sean Hannity while he’s in town.